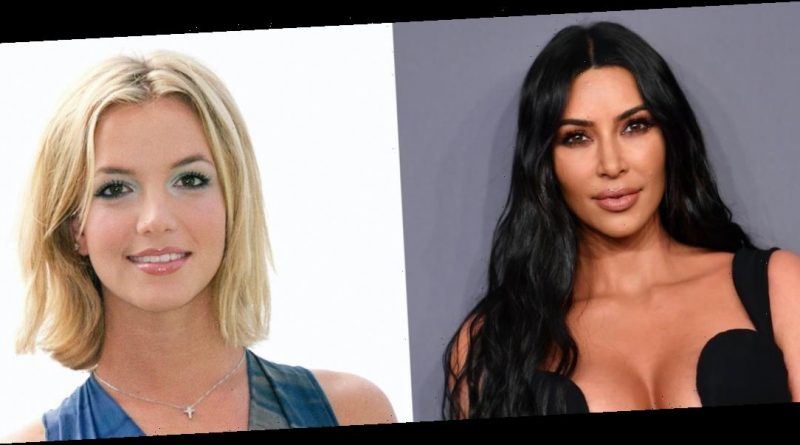 Kim K is opening up about her experiences in the public eye. After watching the Britney Spears Hulu documentary, Framing Britney Spears, the reality star had a lot to say, revealing how deeply she empathized with Spears’ struggles with an invasive media landscape. Kim Kardashian’s Instagrams about relating to Britney Spears got so honest.

The Spears documentary premiered on Feb. 5 on Hulu, but Kim K didn’t stream it until a month later. Once she finally did, the SKIMS mogul talked about the informative flick on Friday, Mar. 5 on her Instagram Stories. "So, I finally watched the Britney Spears documentary this week and it made me feel a lot of empathy for her," Kim K began. "The way the media played a huge role in her life the way it did can be very traumatizing and it can really break even the strongest person."

The celeb continued, "No matter how public someone’s life may seem, no one deserves to be treated with such cruelty or judgment for entertainment." Kardashian then drew on a particularly bad experience she had with the media. "Looking back at my own experiences, I remember a time when I felt this way. When I was pregnant with North I was suffering from preeclampsia, which made me swell uncontrollably," she said.

Revealing the toll being in the public eye took during her pregnancy, she continued, "I gained 60 lbs and delivered almost 6 weeks early and I cried every single day over what was happening to my body mainly from the pressures of being constantly compared to what society considered a healthy pregnant person should look like – as well as being compared to Shamu the Whale by the media," she wrote.

She continued to say she was fearful she’d never get her old body back — especially when she saw old photos of herself. Kardashian admitted she was suffering and feeling insecure from the media’s scrutiny. "I was shamed on a weekly basis with cover stories that made my insecurities so painful I couldn’t leave the house for months after. It really broke me," she said.

Although the body-shaming really affected her, Kardashian says she was able to overcome it. "Luckily I was able to take these frustrating, embarrassing feelings and channel it into motivation to get me where I am today, but to say this didn’t take a toll on me mentally would be a lie," she admitted.

"I’m sharing this just to say I really hope everyone involved in the business of shaming and bullying someone to the point of breaking them down might reconsider and instead try to show some understanding and compassion," she continued. "You just never fully know what someone is going through behind the scenes and I’ve learned through my own experiences that it’s always better to lead with kindness," she concluded.

After her message, she also shared several magazine covers that had shamed her for her weight. The tabloids featured front cover titles like "Dumped at 250 Pounds," one criticizing her outfit choice, one insinuating that her pregnancy was fake, others claiming she was overeating, and memes comparing her to Shamu the killer whale. It’s great to see that Kim K took the high road, but her message is a reminder of just how harmful body shaming and continual media scrutiny can be.