Women! It’s time to STOP being a Christmas martyr: She was savaged for saying her nanny does the wrapping. Is she sorry? No – a defiant Kirstie goes on the warpath for all exhausted mums

You may have heard that I don’t wrap all my own Christmas presents. I know, slow news week!

Can you imagine — I ask Heather our wonderful nanny of 11 years to wrap some of the presents I give to my nieces and nephews, umpteen godchildren, and of course my own two sons and two stepsons.

And as any working mother will tell you it is eminently sensible to try to delegate, particularly during the festive season. 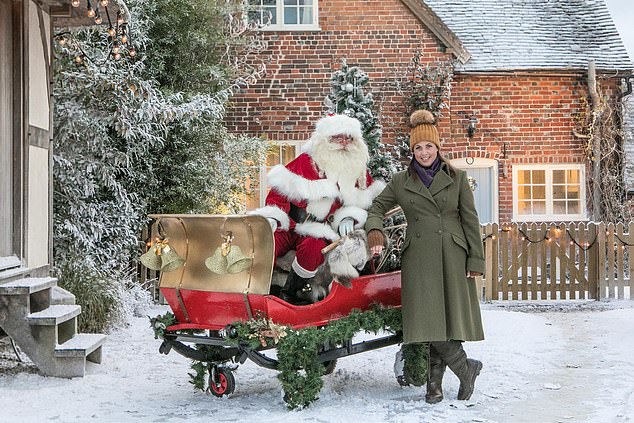 Can you imagine — I ask Heather our wonderful nanny of 11 years to wrap some of the presents I give to my nieces and nephews, umpteen godchildren, and of course my own two sons and two stepsons

Yet a journalist who recently came to my home to interview me about Kirstie’s Handmade Christmas, turned Heather’s wrapping skills into head- line news.

I’m afraid this makes me absolutely livid — and not a bit apologetic.

The reason I don’t wrap my own presents — or paint my own snow scenes on our living room window, or make my own yuletide wreaths — isn’t because I can’t or don’t want to, but because there are only so many hours in the day and craftsmen like the wonderful scene painter Tom Baker who did my window, do it better.

I actually love switching on the television and settling down to an afternoon of careful wrapping, or collecting fresh foliage for a gorgeous door wreath. And I do have the skill set for lots of crafts — with the exception of crochet!

I am obsessed by all things Christmassy, which is where the idea for Kirstie’s Handmade Christmas, now in its 11th year came about.

I am certainly no phoney espousing the joys of a creative Christmas, while secretly hating it all and refusing to decorate at all. But the truth is I can’t do everything. 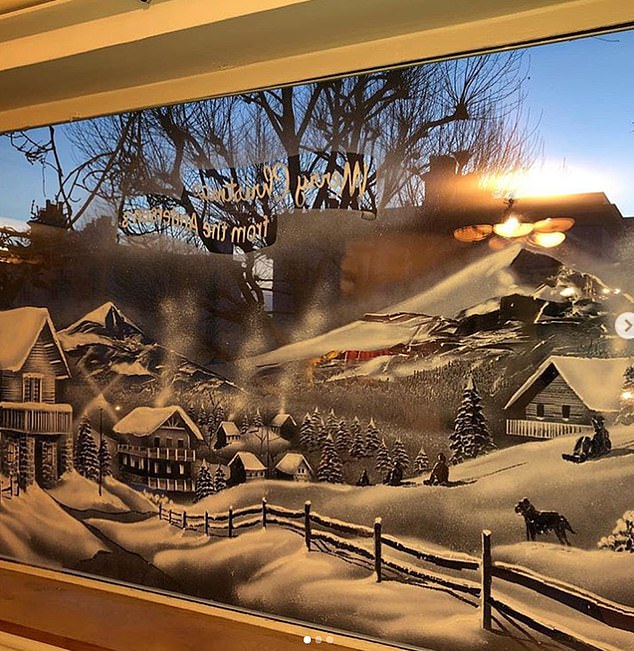 And I know he felt the same way when he saw the snow scene craftsman Tom Baker sprayed on our window. Tom drew a gorgeous Swiss-style scene of chalets and snow and four boys running with a dog

And if delegating means not disappointing someone, I’m happy with that because what I absolutely refuse to be is a Christmas martyr.

I can’t bear the fact that women are expected to step up to an even higher plate at this time of year, while, let’s be honest, most men do very little.

Many, simply think, ‘oh I’m not that bothered about it all, but she loves doing this stuff, so I’ll just leave her to it’.

My partner Ben is a wonderful man and a great father. He’s fantastic, I absolutely adore him but when it comes to Christmas time he has one present to buy. One! And he doesn’t even wrap it!

(Breaking news, this morning Heather was wrapping a present I had no knowledge of — it seems Ben went out on a limb this year and has chosen a present for his God-daughter. I’ll get back to you on how teen girls feel about being given an electric toothbrush.) 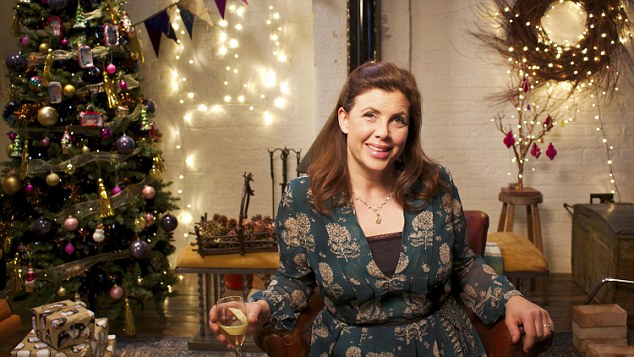 And if delegating means not disappointing someone, I’m happy with that because what I absolutely refuse to be is a Christmas martyr

I’ll admit we can sometimes be our own worst enemies. Women care more about what other people think, and we can be competitive. If you don’t want to be a martyr, you have also to be honest.

If you are very particular about the way things are wrapped, then maybe you should do it yourself or give the task to someone you trust will do it the way you want it done.

I’m giving upwards of 150 gifts this year — not just to family members and god-children but people who work for me, the two production companies I work with and crew from my television shows.

I could just pop 150 gifts in 150 gift bags but that’s massively expensive — and people expect a certain standard of wrapping from me, which is why Heather, who is a beautiful wrapper, can take on part of the task.

And I’m not, I might add, sitting on the sofa scoffing chocolates when the wrapping is being done, or the decorations made.

I have a full-time job and then at this time of year I have committed my time to a lot of charities. There’s no way I’m going to let them down just so I can satisfy some outdated idea of how a woman should behave. 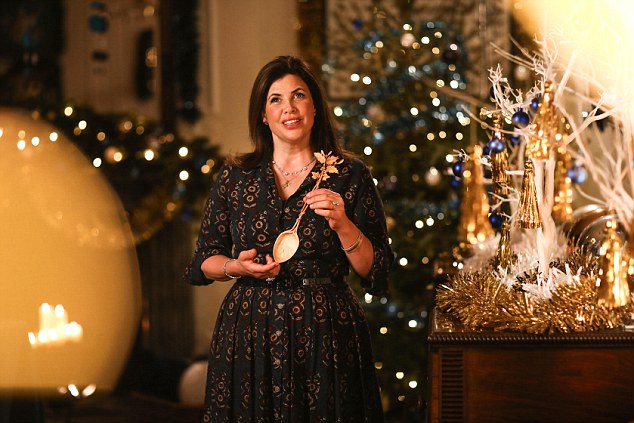 I’m giving upwards of 150 gifts this year — not just to family members and god-children but people who work for me, the two production companies I work with and crew from my television shows

On Monday I got home from work at 5.45pm, jumped in the bath, brushed my hair, slicked on some mascara then 30 minutes later dashed off to a carol concert in aid of Bloodwise, the country’s leading blood cancer research charity.

I’d committed to the event seven months ago and also said I would host some drinks for supporters, as I lived nearby the carol service venue.

That turned into dinner for 40 people at my home — and let me tell you I didn’t cook that myself!

Of course, I got help to get the room ready and arranged for food to be bought and delivered. Should I not have bothered just because I wasn’t cooking it myself and might have been criticised for delegating?

I hate to bring it down to sexism — especially as I know someone as privileged as I am is certainly no victim — but I really can’t see any other explanation.

In fact I’m pretty fed up with the constant focus on who carries out which domestic duties, for women in the public eye.

Obviously, I present a show about Christmas, so it’s perfectly reasonable to be interested in what I do at this time of year, but the same scrutiny is not applied to men in the public eye.

The chef Jamie Oliver, whom I adore, also has a Christmas TV show but I don’t see anyone quizzing him on which bits of his own family’s dinner he cooks or if he wraps any gifts.

And when I’m A Celebrity… was on air earlier this month, presenter and mother-of-three Holly Willoughby got some stick for taking a nanny and a tutor with her to the jungle. 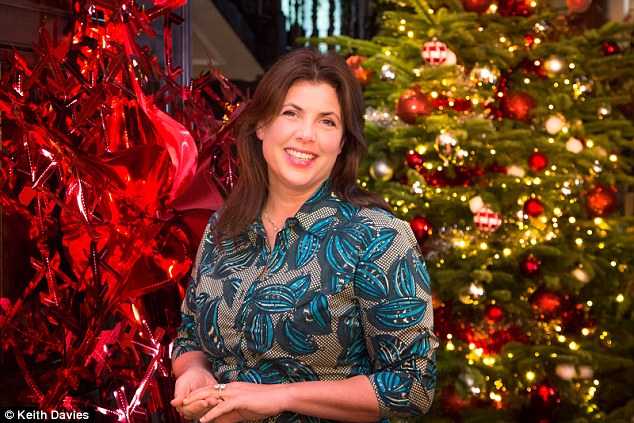 Obviously, I present a show about Christmas, so it’s perfectly reasonable to be interested in what I do at this time of year, but the same scrutiny is not applied to men in the public eye

Well, of course, she would take a tutor — she was taking her children. Holly gets well paid and ITV make a lot of money out of the show, so if there’s enough money to fly family members and childcare out to Australia so her children can accompany her, why not? After all, no-one was asking who was looking after co-presenter Dec’s baby.

And don’t forget, Holly was picking up the pieces for someone else — a man — who should have been co-presenting but had messed up.

We should be celebrating her professionalism, and her honesty, not having a go at her. It’s absolutely vital that people like her and me, in the public eye should be honest about what we can and can’t do.

The last thing I want is for people watching my Christmas show to feel bad about themselves. I always say at the end of each show that, of course, you can’t possibly do everything and you shouldn’t try.

I’m just as delighted when people tweet me to say they love curling up on the sofa to watch the show, but wouldn’t dream of making anything themselves.

And when I have guests myself for Christmas, I send an email round beforehand asking if anyone has a particular talent and would like to contribute — that way it’s not left up to one person to do all the cooking and the stockings, and crackers and gifts.

You have to focus on what really matters at this time of year, which is family. I always choose gifts myself and Heather and I block out two days in the December diary — as far back as August — to do all the Christmas shopping. 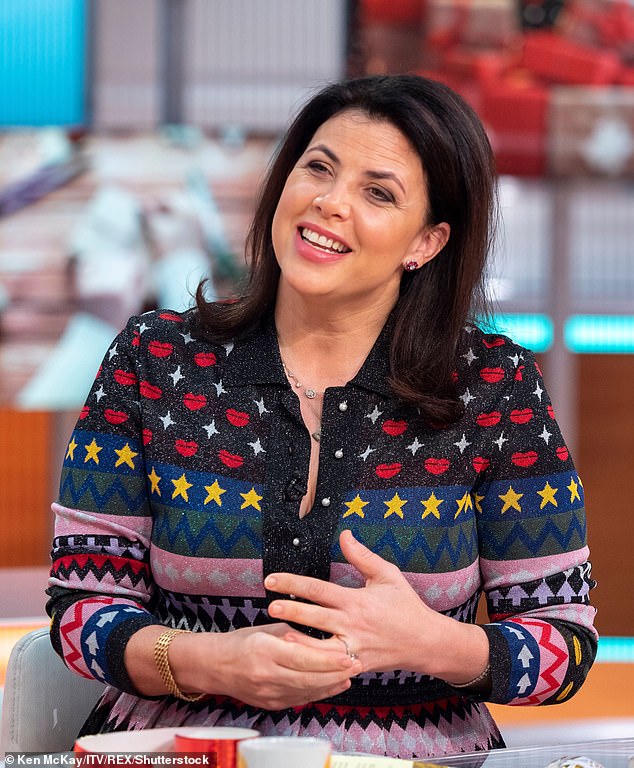 The last thing I want is for people watching my Christmas show to feel bad about themselves. I always say at the end of each show that, of course, you can’t possibly do everything and you shouldn’t try.

I email friends and family beforehand to find out what their children are into, and also do some online research, this year I was able to commission a beautiful personalised dog collar and a guinea pig castle from crafters I’d met, but I also head to shops like everyone else.

Heather and I picked everything out and that way she knows exactly who is getting what.

And I know people will think ‘well it’s all right for her with her big house and her TV jobs’ but I fervently believe all women need to delegate, especially at Christmas.

I’ve seen people’s day-to-day struggles up and down the country, and while I can’t claim to have any insight into the lives of people living in real poverty, I do know the lives of many mums are absolutely exhausting.

Too much falls on our shoulders and the only way through is to delegate, whether that is to someone you have employed, or a family member or friend.

My mother used to get me to do all her wrapping when I was a teenager — sitting in front of the TV watching St Elmo’s Fire on video. And since my mum died, my sister does all my dad’s present-buying and wrapping.

Much as it pains me to say this as a great advocate of crafting — but sometimes some people would rather have a voucher.

And if you trying too hard to get them something lovely makes them feel bad, then that’s not a good thing.

I’m absolutely passionate about telling the truth — in particular to the next generation of women — about what is and isn’t achievable. 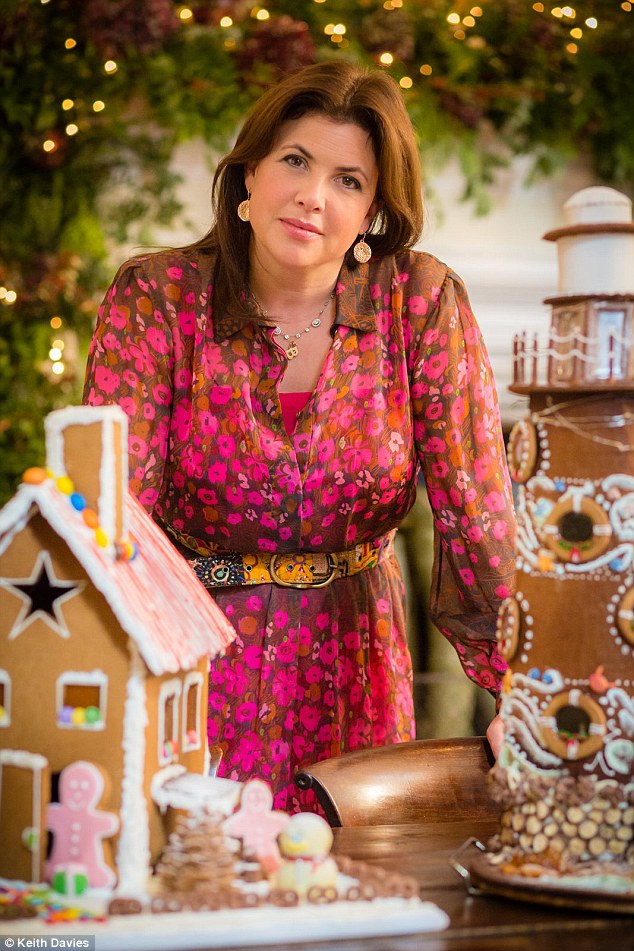 That’s why I don’t have a make-up artist on my property shows, because I’d much rather let people see that you can’t always be immaculately turned out.

If you need help to wrap presents so you can spend time carefully choosing the gifts, then where’s the harm in that?

Even the men who think ‘oh just buy everyone a box of chocolates, that’ll do ,’ can appreciate the effort that goes into careful choosing.

This year I bought one of my nieces’s a light-up nutcracker dress. We gave it to her then switched off all the lights so she could come in wearing it! The look on her face was priceless and my partner Ben turned to me and said: ‘Now I get it.’

And I know he felt the same way when he saw the snow scene craftsman Tom Baker sprayed on our window.

Tom drew a gorgeous Swiss-style scene of chalets and snow and four boys running with a dog, to depict all four of Ben’s sons, and the caption: Merry Christmas from the Andersens.

I’m proud to be championing Tom who is just one of over 100 talented crafts people I’ve met this year alone.

What’s more I paid for his services — I didn’t just get a freebie then tweet about it —- just as I paid my wonderful wreath maker in Devon, another Heather, to make me some beautiful garlands.

Red mittens and Mukmuk: The unlikely success behind the 2010 Winter Olympics’ bestsellers
Travel