Who can believe that it’s been an entire 20 years since Sex and the City graced the HBO screens for the first time? Well, it’s clear that its stars totally got the memo, as Kristin Davis and Cynthia Nixon posted Sex and the City tributes to the iconic show on their respective Instagram accounts in honor of the milestone. And together, the tributes will make all of the every Charlotte and every Miranda in the world oh, so proud.

According to Davis, June 6 marks the official first day the HBO staple made its way to television, and what better way to commemorate the occasion than with an emotional picture of the cast and crew on the day the series wrapped? Davis did just that in her June 6 post, in which the picture showed herself and fellow Sex and the City star shedding a couple tears amongst the very folks who helped to keep the show running for nearly six years. 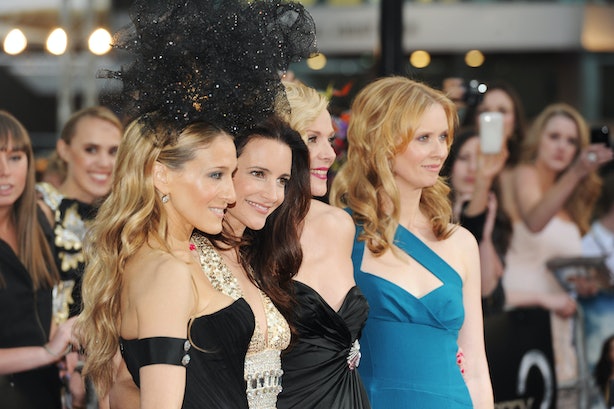 If you ever wondered how the show’s stars related to their characters on screen, Davis’ post will totally settle that longstanding debate for you. Sentimental and extremely sweet, Davis’ tribute definitely drew some pretty close connections between herself and her character Charlotte’s thoughtful and endearing nature.

Also joining in on the celebratory posting, Nixon, who played Miranda in the series, shared a tribute of her own — in only a way that Miranda would. Accompanied with a photo of her political campaign gear donning the slogan "I’m a Miranda and I’m voting for Cynthia," Nixon wrote,

In case you’ve been living under a rock, yes, Cynthia Nixon is running for governor in the state of New York. Seriously… how much more "Miranda" can Nixon running for a political office possibly get? If you know anything about Nixon, you can totally attest to the fact that politics is totally up the alley of the actor and advocate. Over the years, the New York native has become an advocate for public schools, and with the help of former campaign aides to New York City Mayor Bill de Blasio, Nixon is challenging Gov. Andrew Cuomo is the state’s upcoming democratic primary.

Along with progressive groups backing Nixon, her former castmate, Davis, is also in full support of her political aspirations. And following Nixon’s campaign post, Davis shared one of her own on Instagram, showcasing Nixon’s gear and Sex and the City-obsessed caption, writing,

It’s nice to see that no matter how many years fly by, Sex and the City’s impact and all of its references are totally relevant to fans and its co-stars today — even if the show’s nuances happen to pop up on adorable political campaign gear. And while there’s no word to whether or not the iconic show will make its much-anticipated return, at least fans can rest easy knowing that its stars are in love with the franchise as much as they are.