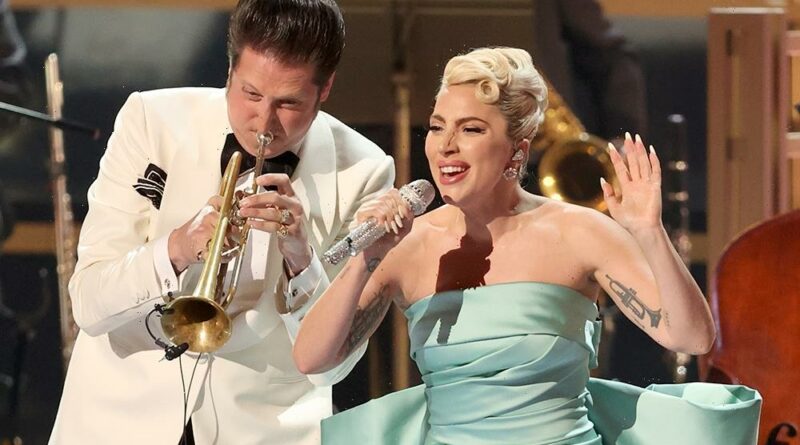 Lady Gaga took the stage at the 64th annual Grammy Awards on Sunday, performing “Love for Sale” and “Do I Love You” from her album “Love for Sale,” which she recorded with long-time friend and duet partner Tony Bennett.

Bennett offered a videotaped introduction for his duet partner, offering a simple and sincere, “Hi everyone, please welcome Lady Gaga!” Gaga then brought the house down with a high-energy rendition of “Love for Sale,” with a big band arrangement of the Cole Porter standard. Gaga, glam in a mint strapless gown adorned with a large bow, then slowed things to belt out a jazzy piano-filled rendition of “Do I Love You.” The video screen in the background showed footage of Gaga and Bennett in the studio recording the record. The performance was an excellent showcase of Gaga’s vocal range and ability to belt out the classics as well as her more pop-based fare.

Variety broke the news on Friday that Bennett would not be joining Gaga for her Grammys performance. In a statement, Bennett’s son Danny said, “Although the producers had invited both Tony and Gaga to perform in Sunday’s Grammys broadcast, it is unfortunate that due to his continuing struggle with Alzheimer’s, he was not able to accept. It was decided that it would be fitting for Lady Gaga to perform on her own to represent for both of them. There is no doubt, that she will offer up an impeccable performance from ‘Love for Sale,’ which is Tony’s final album. He will be cheering her on as he watches from his home in New York City.”

The two performed songs from “Love for Sale” last year for “MTV Unplugged” and the two-night Radio City concert “One Last Time: An Evening With Tony Bennett and Lady Gaga,” which was taped for a CBS special. The making of their album was also captured in a documentary called “The Lady and the Legend,” which is set to release this year on Paramount Plus. Other than that, for the most part, Gaga has promoted the album on her own, due to the 95-year-old Bennett’s Alzheimer’s disease diagnosis that was announced in early 2021.

Gaga is no stranger to holding down the fort as a solo jazz artist, as she’s gearing up to return to her “Jazz and Piano” residency in Vegas later this month for a string of performances. She’s been performing the residency on and off since 2019, and returned to the stage last October after a hiatus due to the COVID pandemic.

The Grammys performance wraps up a long awards season for Gaga, who was nominated at multiple ceremonies for her role as Patrizia Reggiani in Ridley Scott’s “House of Gucci.” Although she missed out on an Oscar nom this year, she was on hand that evening to present the best picture award alongside another entertainment legend, Liza Minnelli.

After her Vegas dates, Gaga is gearing up to finally embark on her long-anticipated Chromatica Ball tour, which kicks off on July 17 in Düsseldorf, Germany.