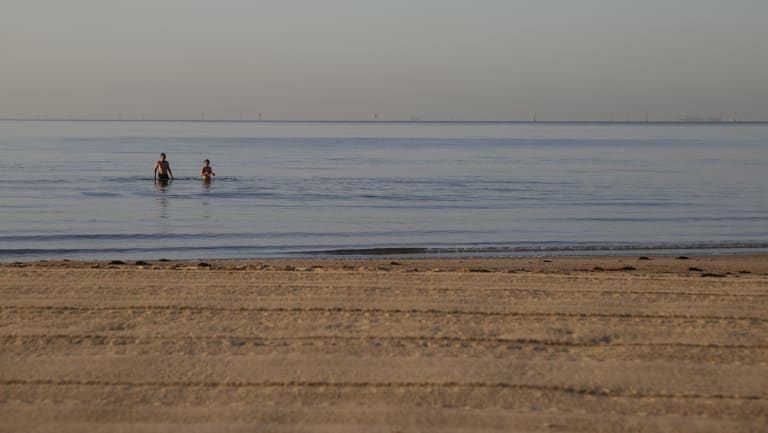 The last swim before winter sets in.

It was only a few days ago that I was thinking about having my last swim of summer. The swimmable days had kept on coming, way past Easter. By now, my beach towel was stiff and heavy with salt and I was starting to wonder when I’d give it a wash.

As a kid in the 1950s, I never thought of a particular swim as being the last one of the season. Each time I went swimming, I’d race into the sandy-bottomed, concrete-walled Eaglehawk baths to play as usual and not think much about whether I was cold or not.

By Easter, I was so distracted by the Bendigo Easter Fair and the dragons, processions and sideshows that I didn’t even think of swimming. Then, sometime during winter, I’d ride down to the park and see that the pool had been drained and the sand lay dry and open to the sky.

Outdoor pools with fences and turnstiles are predictable. The Bendigo Pool would always close sometime during the week after Easter and that would be the end of my teenage swimming until November.

The unpredictability continued through my adult working-parent life. We lived in Warrandyte for more than 20 years and we swam in the Yarra. Each year, by March, we were all embedded back at work and school, and took fewer and fewer walks along the dusty track which threaded towards the swimming hole through the bush reserve between our back fences and the river.

My last swim would be a bit like this. Along the track, I heard the creaking of the ‘'witch’s tree’' which used to scare our kids, noted the corner where our oldest daughter rode over a snake, crossed the firebreak separating the last house from the Koornong Reserve and reached the bank above the swimming hole.

The reeds and willows had started to dry off, the air felt quiet and the sun warmed my back. Down at the water’s edge, I felt coolness as the river exhaled. The end-of-summer water level was low and the upstream reef stretched almost across the river to the bank of Jumping Creek Reserve.

The ''sitting rocks'' on the downstream reef were high and dry. I breathed in the familiar smell of muddy river water and stepped into the gravel and mud-bottomed river. The band of warmth on the surface of the water was very thin and the cold rose up my legs until I had to make myself push off and swim. It was freezing and I swam out to where the current grabbed me, floated down with it a bit and headed back to shore. All rather fast!

At home, I’d need a shower to warm up and wash off the river smell.

Since thinking about these last swims, a huge autumnal cold change has banged in from the south west, bringing actual cold air and rain. I’ve washed my beach towel.

As usual, my last swim has been retrospective!

Liz Low is an Age contributor.