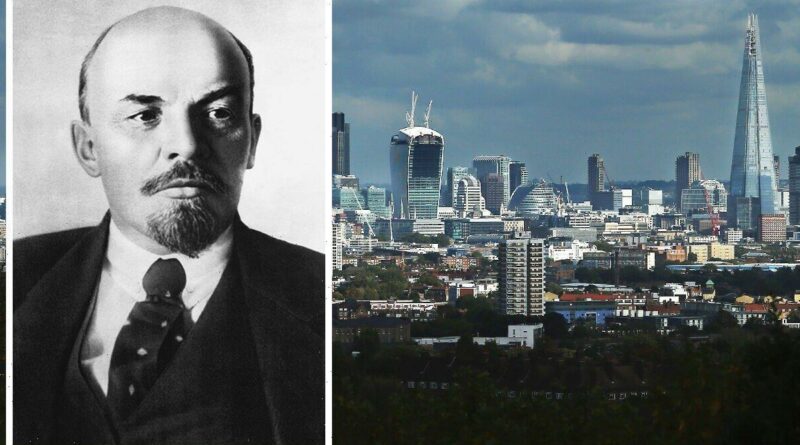 Vladimir Lenin, thought of as the greatest revolutionary leader and philosopher since Karl Marx, died on January 21, 1924, almost a century ago. The founder of the Soviet Union was given a state funeral with tens of thousands braving the cold weather to pay their respects. Yet one important figure was not in attendance. Leon Trotsky was unwell in Tbilisi, Georgia, but claimed he had been given the wrong information in a strategic move by Joseph Stalin. Both he and Lenin had worked closely together and became firm friends, having met in Britain. In fact, many who plotted the Russian revolution resided in London with plans for the history-defining movement laid in the English capital.

Towards the end of the 19th century, Russia had no constitution. Instead, all the power lay with Tsar Nicholas II. Peasants, workers, and the military were becoming increasingly dissatisfied.

In response, revolutionary plots began to emerge. Lenin, who was mixing in Marxist circles, helped organise the “Union for the Struggle for the Liberation of the Working Class”. After attempting to enlist workers, he and other leaders were arrested in 1895.

He was imprisoned for a year before living in exile in Siberia for three years. Eventually, he escaped to Western Europe, ending up in London from 1902 to 1903 with his wife, Nadezhda Krupskaya.

She kept a detailed diary of their time in the capital — or as she put it, the “citadel of capitalism” — which the couple found initially overwhelming, compounded by the fact the weather was “filthy” and the food “indigestible”.

But London sparked Lenin’s curiosity. It was the best place for him to publish his newspaper, Iskra, which means “the Spark”. Its purpose was to rally the workers to rise against the Tsar and Russian aristocracy — its motto: “a spark a fire will flare up”.

From a tiny office at Clerkenwell Green, Farringdon, the paper was printed by a supportive, left-wing publisher before it was smuggled to Russia. Today, the office is now the Marx Memorial Library.

Lenin spent a great deal of time in the Reading Room at the British Museum’s Great Library. His library ticket is still there under the name Jacob Richter, the moniker he used while living in Britain.

He read many works that had been banned in Russia, such as that of Engles and Marx. Similarly, Marx — a great inspiration to Lenin — had diligently consumed all the prohibited Russian works the library had to offer decades before.

In 1902, Lenin and Trotsky met for the first time, discussing Russian politics while sightseeing. As they passed the Houses of Parliament, Lenin turned to Trotsky and said “that is their famous Westminster”.

In August 1903, under the guise of an anglers’ club meeting, the first congress of the Russian Social Democratic Labour Party Party was held at the Communist Club in Charlotte Street.

It was due to be held in Brussels but was forced to move after interference from the Belgian police. The comrades frequently changed venue over the fortnight, for fear of being caught by the Tsar’s secret police.

Another session was held at Islington’s Three Johns pub with both Lenin and Trotsky in attendance. Matters grew heated — while Lenin wanted to take a radical approach, others were leaning towards softer tactics in taking down the Tsar.

Seven who opposed Lenin walked out over the disagreements. Consequently, as his opposition had shrunk, his group of comrades took the name the “Bolsheviks”, or the “majority” with his opposition now known as the Mensheviks or “minority”. This split later became official in 1912.

A People’s History of the Russian Revolution author, Neil Faulkner, told the BBC in 2017: “The 1903 London congress is regarded as decisive in the development of Bolshevism. It’s hugely significant.

“Most people on the revolutionary left would say this is the decisive break between revolution and reform. A lot of liberal commentators would see it as the tiny seed from which ultimately grows the gulags and the labour camps of the 1930s.”

Other congresses, in 1905 and 1907, were also held in London. The former, held at the Brotherhood Church in Hackney, which no longer exists today, was attended by both Lenin and Trotsky as well as Stalin and most future Bolshevik leaders of the revolution.