Home » Lifestyle » Limo in New York crash “not supposed to be on the road,” governor says

The supersized limousine that crashed and killed 20 people outside an upstate New York country store failed a safety inspection last month and shouldn’t have been on the road, and the driver wasn’t properly licensed, Gov. Andrew Cuomo said Monday.

The state moved to shut down the owner, Prestige Limousine, as state and federal authorities investigated the cause of Saturday’s wreck in Schoharie. Federal records show the company has undergone five inspections and had four vehicles pulled from service in the last two years.

“In my opinion, the owner of this company had no business putting a failed vehicle on the road,” Cuomo said while attending a Columbus Day Parade in New York City. “Prestige has a lot of questions to answer.”

Investigators were reviewing text messages and social media posts from victims who were active moments before the deadly crash. Police seized four vehicles from the company including the one involved in the crash, and said the owner of the company could face criminal prosecution if they are at fault.

In a statement, Prestige Limousine said it “extends its deepest condolences to the family members and friends of those who tragically lost their lives” in the crash. “We are performing a detailed internal investigation to determine the cause of the accident and the steps we can take in order to prevent future accidents.”

As victims’ relatives tried to come to grips with the tragedy that happened as a group of friends and family were on their way to a 30th birthday celebration, authorities had yet to say how fast the limo was going, whether its occupants wore seat belts or what caused the vehicle to run a stop sign. 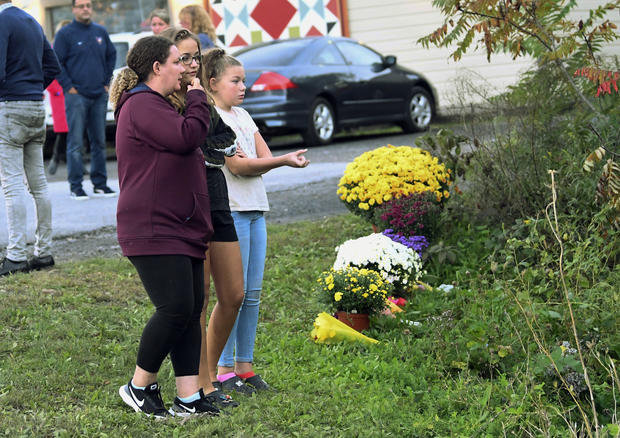 Friends of victims that died in a fatal limousine crash comfort each other in Schoharie, New York, on Sunday, Oct. 7, 2018.

Investigators were conducting autopsies, including on the driver, to see if drugs or alcohol were factors, and the National Transportation Safety Board was also looking into whether the limo had any mechanical problems.

But officials already saw some red flags, Cuomo said: The driver didn’t have the necessary commercial license, the limo had been cut apart and lengthened in a way Cuomo said violated federal law, and the vehicle failed a state inspection that examined such things as the chassis, suspension and brakes.

The wreck killed two pedestrians and all 18 people in the limousine, including four sisters who were headed with friends and relatives to a brewery for a party for one of the sisters. A vigil was planned Monday night in Amsterdam, where some victims lived.

“Can’t wrap your head around it, you just can’t,” the sisters’ aunt, Barbara Douglas, told “CBS This Morning.” “They were wonderful girls. They would do anything for you and they were very close to each other and they loved their family.”

The limousine, built from a 2001 Ford Excursion, ran a stop sign at an T-shaped intersection at the bottom of a hill and slammed into an unoccupied SUV at the Apple Barrel Country Store and Cafe, a popular stop for autumn leaf-peepers.

The crash appeared to be the deadliest land-vehicle accident in the U.S. since a bus full of Texas nursing home patients fleeing 2005′s Hurricane Rita caught fire, killing 23. Saturday’s wreck was the nation’s deadliest transportation accident of any kind since a 2009 plane crash near Buffalo, New York, killed 50 people.

Limousines built in factories are required to meet stringent safety regulations. But luxury cars that have been converted to limos like the one in Saturday’s crash often lack certain safety components, such as side-impact airbags, reinforced rollover protection bars and accessible emergency exits.

There are few federal regulations governing limos that have been modified after leaving the factory. Regulations often vary by state and even local governments.

Ford said it has never made its own stretch version of the Excursion SUV. The automaker has a program that certifies companies that modify vehicles to Ford specifications, but it was unclear whether the limo in Saturday’s crash was altered by one of those companies.

There were 12 wrecks — and a dozen crash deaths — involving large limos from 2012 to 2016, according to the National Highway Traffic Safety Administration. That compares with over 157,000 crashes and over 171,000 deaths involving all types of vehicles during that period.