Home » Lifestyle » ‘Luckiest guy in this country’: Dylan Alcott is Australian of the Year

Paralympic champion and tennis golden grand slam winner Dylan Alcott is the 2022 Australian of the Year, describing himself as the “luckiest guy in this country” as he was honoured for his powerful disability advocacy and unmatched legacy in the sport he credits with saving his life.

The wheelchair tennis star, who is vying for his eighth Australian Open crown, made history last year as the first man to complete a golden slam of all four major singles titles as well as Paralympic gold in a calendar year. 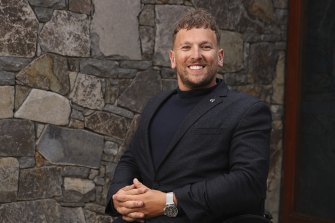 Australian of the Year Dylan Alcott ahead of the ceremony where his win was announced.Credit:Alex Ellinghausen

Alcott said he was determined to continue to advocate for people living with disabilities as he prepares to retire from the sport, and told the crowd in Canberra he would push for societal changes.

“We have to fund the NDIS, first and foremost. And listen to people with lived experience and ask them what they need so they can get out and start living the lives they want to live and remind ourselves that it is an investment in people with disabilities. So they can get off pensions and start paying taxes,” he said on Tuesday night.

“We’ve got to get them the vaccines and the tests and whatever else they need so they can get out there and start living their life. If a person with a disability needs a free daily RAT test so they feel confident going out and doing things that we all might take for granted, they’ve got to get that RAT test.”

Alcott said the unemployment rate for people with a disability was double that of able-bodied people, and the rate hadn’t changed in 30 years.

“My purpose is changing perceptions so people with people like me can get out there and live the lives they deserve to live,” he said.

Alcott, who was named the 2022 Victorian Australian of the Year in November, flew to Canberra for the awards ceremony on Tuesday evening, where Prime Minister Scott Morrison bestowed the national honour, before a return to Melbourne to continue his finals campaign.

“I think standing ovations are one of the most ironic things in the world, by the way. But I’ll take them,” Alcott joked as he was named the winner.

Alcott paid tribute to the frontline workers, nurses, doctors, vaccinators and other first responders working through the pandemic.

“You deserve this much more than a guy who hits tennis balls and loves talking. I really mean that. It’s such a huge honour,” he said.

Alcott became a paraplegic as a baby following an operation to remove a tumour wrapped around his spinal cord during the first few weeks of his life.

He talked about how he hated his disability growing up, seeing people on road safety ads whose lives appeared to be over because they were in a wheelchair following a car crash. But Alcott paid tribute to the people who went before him in the public eye.

“Paralympic athletes, people like that are the reason that I got into sport, advocates like Stella Young, they paved the way so I can be here tonight. They should have been Australian of the Year as well,” he said.

“I’m honestly so honoured to be up here and it’s because of them and everybody in my life that I sit here as a proud man with a disability tonight.

“I’m the luckiest guy in this country.” 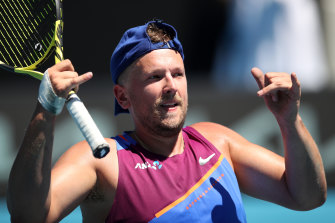 Dylan Alcott celebrates match point in his semi-final win in the Australian Open on Tuesday.Credit:Getty

He takes the mantle from 2021 recipient Grace Tame, a sexual abuse survivor who campaigned for nationally consistent sexual consent laws and became a strong critic of the Morrison government over its handling of women’s safety issues.

His appointment elevates the issue of disability funding ahead of this year’s federal election. Alcott, who has previously hinted at an interest in entering politics, said in 2019 he was “devastated” when it emerged there had been a $4.6 billion underspend on the National Disability Insurance Scheme and called on the government to “fix it”.

Seventy-one-year-old St John Ambulance volunteer Valmai Dempsey, from the ACT, is the Senior Australian of the Year in recognition of her more than 50 years of service that included leading a team of volunteers to respond to the 2020 ‘Black Summer’ bushfires. Dr Daniel Nour, 26, who founded charity Street Side Medics in NSW to provide medical services to the homeless, is the Young Australian of the Year. Shanna Whan, 47, also from NSW, who founded alcohol awareness initiative “Sober in the Country” is Australia’s Local Hero. 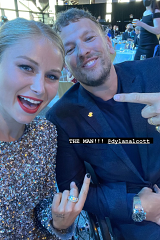 Last year’s Australian of the Year Grace Tame posted an image of herself and 2022 winner Dylan Alcott to Instagram.

Ahead of the announcement, Paralympian Kurt Fearnley, a three-time gold medallist in wheelchair racing and 2019 NSW Australian of the Year, said Alcott would be an ideal recipient of the honour.

“He’ll be our first Paralympian to receive the award and to my knowledge first from the disability community. He had the perfect year, on and off court. In 2022 we’ll have findings of a Disability Royal Commission and NDIS change. He’d nail the role,” Fearnley said on Twitter on Tuesday.

“Dylan Alcott is a champion who has risen to the top of the world rankings through sheer grit and determination. His Golden Slam is an incredible feat, the first for any male tennis player,” she said.

“Through the Dylan Alcott Foundation, he is giving young Australians facing disadvantage the promise of a better future.”