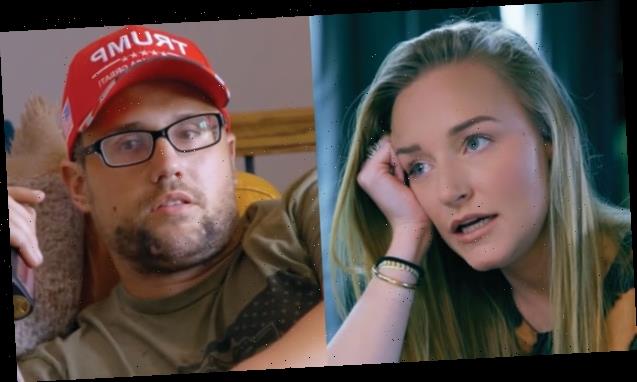 Ryan Edwards, his wife and parents were reportedly fired off ‘Teen Mom OG’ after Maci Bookout wanted to ‘go a different direction,’ a new report claims.

Ryan Edwards and his family — which includes his wife Mackenzie and parents Jen and Larry — were reportedly fired from Teen Mom 2. Well, technically. Although they were allegedly “let go” by MTV, they “were just being set aside right now,” production sources told The Ashley on March 24.

Ryan Edwards with his wife, Mackenzie, and parents Jen and Larry. [Instagram/@mimijen65]

“Ryan and Mackenzie, as well as Jen and Larry, were all on a call with production on Tuesday informing them they won’t be on the show anymore going forward,” a source explained to The Ashley. This network decision allegedly had to do with Ryan’s ex, Maci Bookout, whom he shares his 12-year-old son Bentley with.

“The Edwards were informed that Maci’s reps wanted to go a different direction and showcase all of her abilities,” the insider claimed, adding, “Maci went to production and explained she wanted her story to cover all the parts of her life and no longer focus on Ryan and his family.”

Ryan and Larry reportedly did not react well to this news from production. “Ryan and Larry told them not to waste their time coming back to film in the future if they were serious about it,” the report claimed. HollywoodLife can not individually verify these claims at the moment, and we have reached out to MTV for comment.

While Ryan and Mackenzie have not yet confirmed their reported firings, Ryan’s parents claimed that they were indeed axed from the show. “We, the family have been let go from the show by the network. It’s unbelievable,” Ryan’s father Larry told The Sun on March 24.

Bentley’s grandfather couldn’t disclose the reason behind the family’s firings. However, Larry did say that during the Teen Mom OG reunion — which has not yet aired — Maci got “so mad” at Ryan’s family for claiming that they hadn’t seen Bentley in a month. Jen was the person who actually made that claim earlier in Season 9, which is still airing; Larry claimed they “got in so much trouble” over this.

Maci’s drama with Ryan and his family has been playing out on the current season of Teen Mom OG. In the season premiere that aired on Jan. 26, Maci’s order of protection against Ryan had ended, but she was still not on speaking terms with him (only his parents, to arrange visits). Maci even claimed that Bentley would only see his father if he sought therapy for his addiction issues.

Ryan’s family, meanwhile, were suspicious of Maci allegedly manipulating Bentley to keep him away. Meanwhile, Maci has insisted that it has been her son’s decision to keep his distance.

By the Feb. 2 episode of Teen Mom OG, Maci revealed that Bentley wants to go to therapy to “repair his relationship with his dad.” Both Ryan and his wife, Mackenzie, were still skeptical of Maci. The drama carried over into an episode that aired later that month; Bentley did not want to attend a birthday party for his half-brother Jagger at Ryan and Mackenzie’s house, but he was willing to show face at the party hosted at his grandparents’ home. Mackenzie ended up calling Maci a “petty b-tch” over the drama.

These family tensions reportedly carried over into the taping of the reunion episode, just like Larry said. Maci and her husband, Taylor McKinney, allegedly “came to blows with Ryan’s parents” and the couple got “so angry” that they “eventually stormed off set” during the reunion in Tennessee at the end of February, The Ashley claimed.