Home » Lifestyle » Magic spells, goats and fire: A most confusing night at the theatre 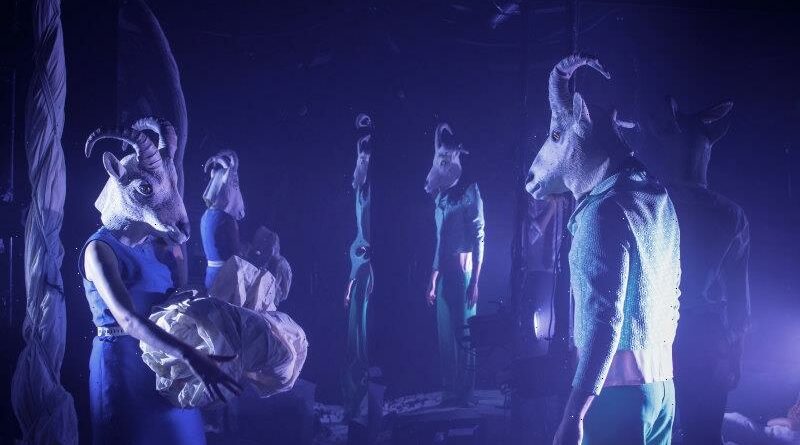 I don’t mind being bewildered (which is handy, given it’s my natural state), but here was a play that seemed somewhat bewildered about its own intent. Burn Witch Burn is not so much an adaptation of the 1962 horror film of that name (better known by its original British title, Night of the Eagle), as it is a group-devised fantasia of theatrical images inspired by the film, intermittently sending it up.

At its best it is wickedly good. When the actors first disport themselves about Emma White’s white-draped stage, Alex Packard hilariously addresses us in the stop-start manner of a narrator making up his lines on the fly. He sets up the story of Norman, an academic, who learns his wife, Tansy, is a witch, before becoming Norman, himself, and stepping into the action. Tansy is not a witch of the sulphurous, Satan-worshipping variety, but one of the whiter magic of ensuring her husband’s success. The problem is that the wives of all the male academics are playing the same game. 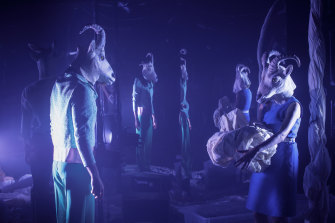 I kid you not: The eyes of the goats’ heads seem to stare right through you.Credit:Phil Erbacher

Director Claudia Osborne (for FEVOUR and Red Line Productions) and dramaturg Tasnim Hossain have jointly devised the piece with the cast, and they won’t die wondering what might have happened had they laid on the theatricality a little thicker. But they might wonder about whether a rather good idea got away from them, like a half-tamed horse breaking out of a corral.

Besides the opening, the most compelling sequence comes when some of the cast don goats’ heads, the eyes of which seem to stare right through you. The effect is equally spooky and amusing, and more such spookiness would not have gone astray.

The mayhem lampoons itself by cutting to a snippet of the film in which Norman demands an explanation from Tansy. “Well, isn’t it obvious?” she replies. No! After 75 minutes you stagger off into the night a little more wary of charms, goats and fire, and certain that a deeper spell could have been cast.