A perfectly-timed photo shows the split-second moment a male kingfisher tried to assist his mate with her fish food delivery for their chicks.

The blink-of-an-eye exchange was caught on camera by amateur wildlife photographer Diana Knight.

Pensioner Diana had been waiting in a hide by a pond all night trying to get shots of a group of otters near Bourne, Lincolnshire.

With dawn breaking the otters hadn’t made an appearance and a tired Diana started packing away her camera tripod and kit. 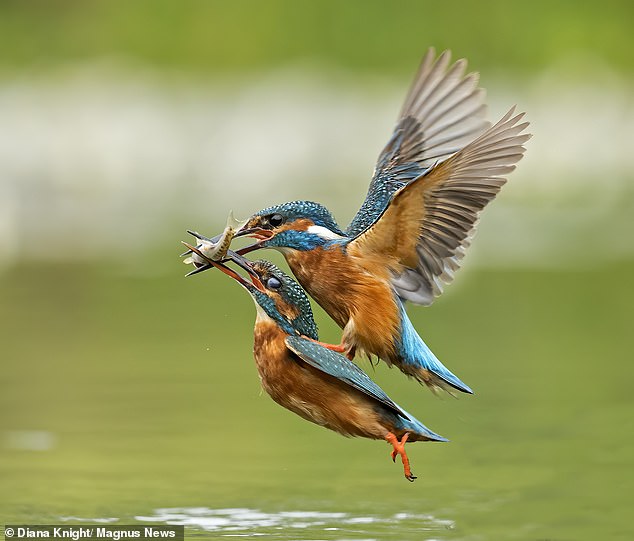 Photographer Diana Knight captured the moment a male kingfisher tried to assist his mate with her fish food delivery for their chicks while trying to get shots of otters near Bourne, Lincolnshire (pictured)

Suddenly, a blue flash caught her eye and instinctively Diana pressed her camera shutter capturing a very rare image of two kingfishers interacting on the wing.

Kingfishers are notoriously difficult to photograph in flight as they dart at high speed to catch their fishy prey.

But in the photo taken in July, Diana managed to capture not only a successful catch but also a parental handover of the shopping for the kids.

Diana, who lives with husband Cliff, said she was pleased when she saw the result of the decision to take the shot.

She said: ‘As so often happens with wildlife photography, you make a plan and go out with one thing in mind, and Mother Nature changes all that in a blink. 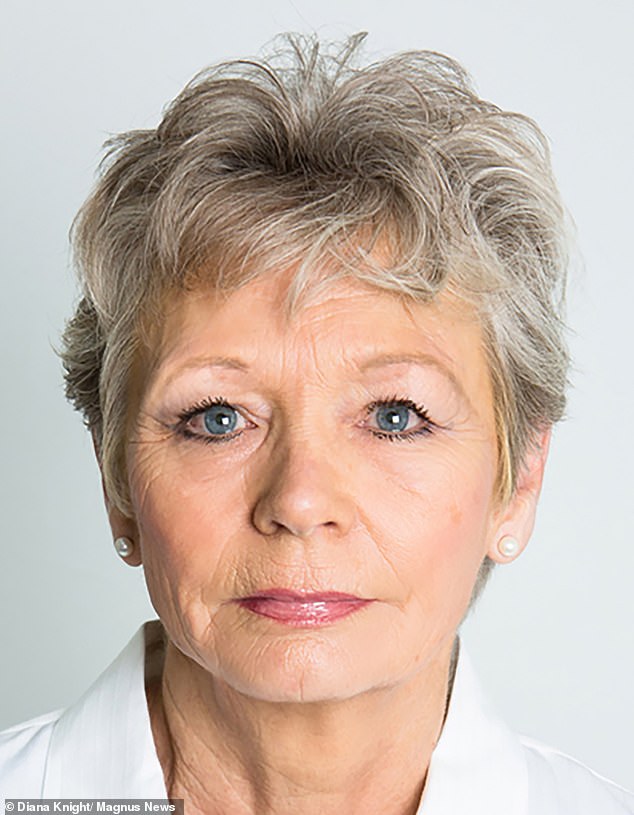 Pensioner Diana (pictured) had been waiting in a hide by a pond all night trying to get shots of a group of otters near Bourne, Lincolnshire

‘However, I was very pleased with this picture as an unusual action shot and so asked my husband to post it on a local group’s social media page.

‘I don’t have a Facebook account and am a bit of a technophobe, happier with a tablet of stone and a chisel than a computer.

‘Nevertheless, I was astounded when It received nearly 500 likes and was delighted with how many people seemed genuinely amazed to see this unusual behaviour too.’

Where are kingfishers found and how rare are they?

Kingfishers, known for their striking bright blue and orange feathers, are found across Britain but particularly in central and southern England.

The bird, which has a conservation status of amber, is found by still or slow flowing water such as lakes, canals and rivers in lowland areas.

They hunt fish from riverside perches, sometimes hovering above the water’s surface before diving down rapidly to make a catch.

Diana used a Canon 1dx ii with a 300mm f2.8lens to get this great shot and said the unusual nature of the image made up for a lack of otters.

She said: ‘As I was starting to dismantle my tripod, right in front of me there was a sudden flash of blue, followed by a splash as the kingfisher dived into the water.

‘It was not planned but I think I must have been on autopilot and instinctively pressed the shutter button to record the event.

‘When I saw the female kingfisher emerge I was amazed to see the male kingfisher challenge her and try to aggressively wrestle the fish from her, the female bird has an orange bill, whilst the male’s is black.

‘Why he would do this? I have no idea since both had been happily fishing together and taking the food back to their nest since first light.

‘The chicks would have been fed no matter which parent had delivered it, but for some reason, the male bird obviously fancied himself as the better provider and felt the need to take this little fish too.

‘They disappeared away in a flash of blue, and shortly after were both fishing again as I departed, so I never got to see if this behaviour was repeated.’

Diana said Covid-19 had meant she wasn’t able to travel as far as usual to follow her passion for wildlife.

She said: ‘Due to the Covid restrictions, options for wildlife photography have been limited and I haven’t been able to go far or join photographic trips so instead I visited a pond hide alone and where I intended to stay overnight as otters are known to visit and I thought they would make some great shots.

‘This mated pair of kingfishers were actively fishing early in the evening and taking the fish off to their nesting chicks which were somewhere along a nearby riverbank I believe.

‘I hardly took any pictures of them as they are so frequently photographed that it is very difficult to get something ‘different’ with kingfishers and that has never been seen before and so I thought they would provide very little of interest.

‘But Mother Nature proved again she always surprises you.’

Emma Willis net worth: TV presenter has an impressive sum of money in the bank
Celebrities News