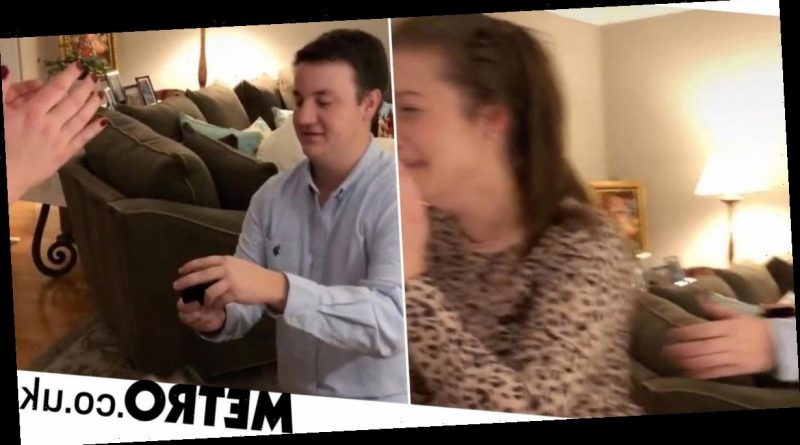 After six years together, Hannah Luck thought her moment had come when her boyfriend got down on one knee at Christmas.

But she was left sobbing when it turned out to be a prank and he was actually giving her earrings.

The TikTokker shared a video of the moment, where she cried as her partner held a small box.

The boyfriend began by reciting what seemed to be a romantic speech saying: ‘I love you so much, we’ve been together six years.’

Hannah, thinking he’s going to ask to marry him, burst out in tears.

Of course the man was just playing a prank on Hannah and revealed a set of earrings in a velvet ring case.

He asked her: ‘Will you…take these earrings?’

In the viral clip, Hannah laughed and said: ‘I knew it.’

Sometimes we have to laugh to mask the pain.

The clip has now been viewed more than 1.3million times and most said they wouldn’t encourage this sort of prank.

Many advised Hannah to break up with him, if the relationship isn’t going where she wanted.

One person wrote: ‘It would be funny if it were six months but she was probably expecting it at six years bro. This is heartbreaking.’

Another said: ‘Absolutely not. Throw the whole boy away please.’

‘The AUDACITY. Like this is just mean,’ someone else commented.

One person wrote: ‘Don’t let your boyfriend keep you from your husband.’

Some people said Hannah’s reaction to what she thought was the proposal said it all, and that it was ‘cruel’ of him to make fun of those feelings.

However, Hannah posted an update saying this is the nature of their relationship.

She added that the video was taken last year and that she and her partner are now happily engaged.

Hannah posted in a comment: ‘I’m pretty surprised this video got as many views as it did. Also kind of taken back by how many people really hate my fiancé.

‘He’s not a bad person, I posted this because I thought it was funny. Our relationship is filled with us playing jokes on each other.’

Do you have a story you want to share?