Home » Lifestyle » Man Loses Wildlife Photo Award Because He May Have Used A Dead, Stuffed Anteater

A photograph that won an award in England has been disqualified after an investigation found that the image may not be what it seemed.

The Natural History Museum in London, which holds the Wildlife Photography of the Year competition each year, previously named photographer Marcio Cabral the winner of the 2017 Animals In Their Environment category for his photograph “The Night Raider.” The image shows an anteater in Brazil’s Emas National Park.

A Friday press release from the museum announced that the image was disqualified because evidence “presented to the Museum by third parties” revealed “that it is highly likely the animal in the awarded photograph is a taxidermy specimen.”

The museum states the taxidermy animal “breaches the competition rules, which state that ‘entries must not deceive the viewer or attempt to misrepresent the reality of nature.’”

Cabral “strongly” denies that the anteater in the photo is a taxidermy specimen, according to the museum’s statement. He did not respond to HuffPost’s request for comment.

Roz Kidman, chair of the competition’s jury, had some harsh words for the photographer.

“I find it disheartening and surprising that a photographer would go to such lengths to deceive the competition and its worldwide following,” Kidman told BuzzFeed. “The competition places great store on honesty and integrity, and such a breach of the rules is disrespectful to the wildlife photography community, which is at the heart of the competition.”

The museum noted that Cabral complied fully with the investigation and supplied RAW image files of images he says were taken before and after he captured the anteater. Neither of those images include the anteater, though Cabral told the museum that he had an explanation why and that there was a witness who saw the live anteater with him. 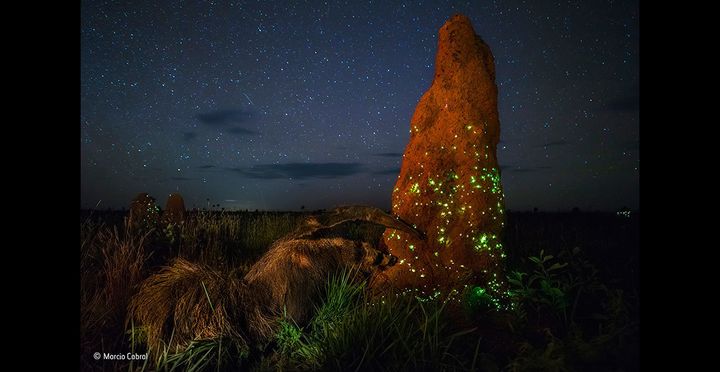 The team that investigated the image included two mammals experts and a taxidermy specialist at the Natural History Museum in London, along with a South American mammals expert and an expert anteater researcher. They all independently examined the high-resolution photographs of a taxidermied anteater on display in the Portão do Bandeira gate, an entrance to Emas National Park.

Each investigator found that the anteater’s “posture, morphology, the position of raised tufts of fur and in the patterning on the neck and the top of the head” in Cabral’s image were too similar to the one on display for them to be different creatures, according to the museum’s statement.

Many people on social media were incredulous at the news of the photograph’s alleged manufacturing:

Cabral’s photograph was previously featured on the museum’s website with the caption:

Marcio had been visiting the National Park for three years waiting for the right conditions to capture the glowing termite mounds. After days frustrated by rain, he was in for a surprise. A giant anteater ambled out of the darkness and stayed just long enough for Marcio to take a single picture, using a long exposure and flash to highlight his unexpected companion.

The image has since been taken down.

Due to the investigation, Cabral’s photograph will also be removed from the museum’s exhibition and tour. A museum spokesperson told HuffPost that Cabral is “no longer eligible to enter the competition” and that the institution will not be taking any further action at this time.