Talk about striking gold! Man who lost his beloved class ring in a lake while he was water skiing in 1973 is left stunned when the 10-karat band is recovered by a metal detector 45 YEARS later

A dad has been reunited with a ring 45 years after it was ripped off his finger while he was water skiing.

Glenn Pelrine, now 70, was enjoying a day out with family back in 1973 when his prized class ring plunged to the bottom of a pond.

Dad-of-four Glenn, who is from Weymouth, Massachusetts and owns a candy shop, purchased the golden ring for around $200 when he graduated from the Franklin Institute in Boston in 1971. 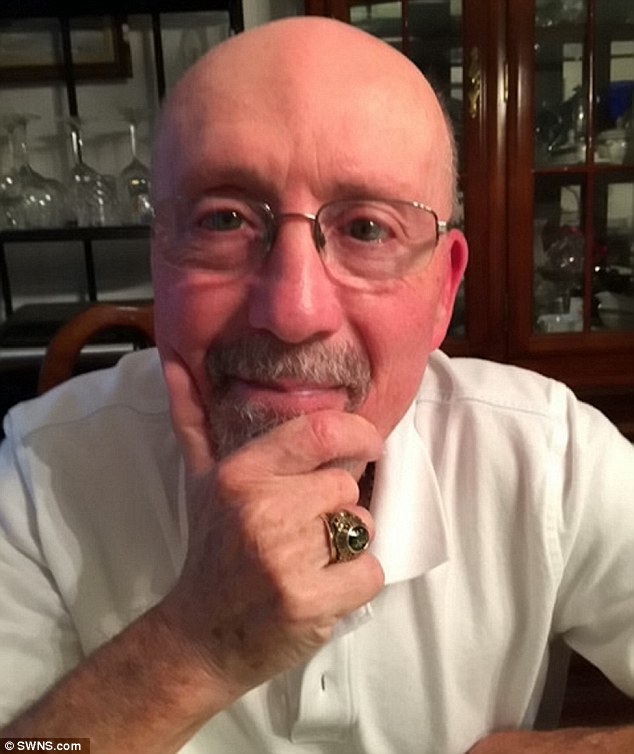 Surprise! Glenn Pelrine, now 70, was shocked when the class ring he lost in a lake in 1973 was recovered by a metal detector 45 years later 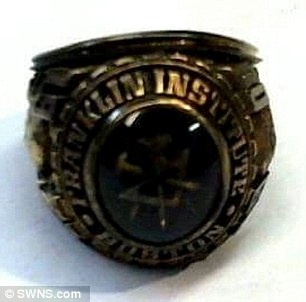 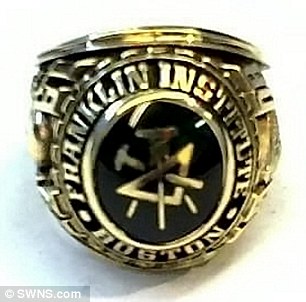 Wear and tear: The ring, which Glenn bought for $200 when he graduated from the Franklin Institute in 1971, was buried in sand under four feet of water and had to be carefully cleaned

He wore the ring – which is inscribed with his name – every day until it was lost two years later in south Middleborough, Massachusetts.

The retired engineer believed the ring to be lost forever until he received a Facebook message from Maria Mignosa on July 3.

Maria and her partner Carl Reed Jr, a former fireman, had discovered the ring in the private pond on his land using an underwater metal detector.

Maria, who works at Gregory Scot Jewelers in Middleborough, brought the ring to work to brush off four decades of pond scum.

Glenn said: ‘I graduated from the Franklin Institute in 1971.

‘I was water skiing on this pond in Middleborough in 1973 and I fell and the tow rope kind of caught it and flung it into the water.

‘I was devastated. I spent hours snorkeling for it but I couldn’t find it. I managed to move on.’

However, 45 years after Glenn gave up hope of ever finding his beloved ring, the unthinkable happened: he received a message from a Middleborough woman called Maria Mignosa who said that her boyfriend had recovered the bauble while he was metal detecting in the lake.

Carl Reed Jr, a retired fire captain who lives near the lake, took up metal detecting two years ago, but had never previously struck gold – until the incredible moment he uncovered Glenn’s long lost class ring buried in the sand under four feet of water. 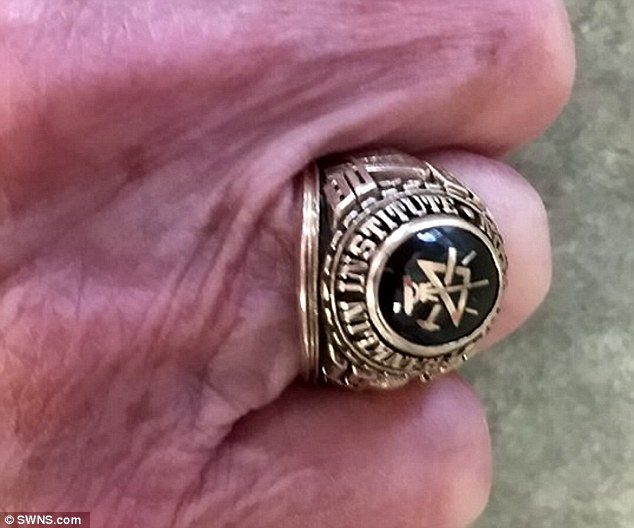 Happy as can be: Glenn says he wore the ring ‘constantly’ when he first got it, and was devastated by its loss 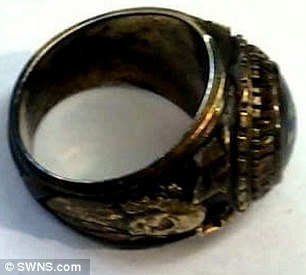 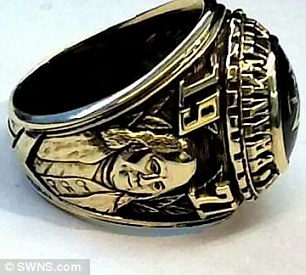 Memories: The candy shop owner was reunited with the ring by former fire captain Carl Reed Jr, who discovered the band while he was metal detecting in the lake where it was lost

While Carl initially thought he had found his first piece of gold, his girlfriend – who works in a local jewelry shop – quickly identified the ring as being a lost item, and decided to take it into her place of work in order to better establish where the ring had come from.

After cleaning the blackened piece of jewelry up, Maria spotted a signature on the band, and managed to make out the name: Glenn Pelrine, who she managed to track down courtesy of a quick Facebook search.

’45 years pass by and I get this message from this lady called Maria,’ Glenn recalled of the moment he received the joyful news. ‘I didn’t recognize her face, but it said where she lived.

‘I opened the message and the first line said something about a ring and I immediately knew it was mine.

‘The ring was engraved with my signature so that’s how she knew it was mine.’

‘I didn’t realize metal detectors can go under water but this one could. It was in about four feet of water in the pond.

‘It was sort of buried in the sand he told me.’

Glenn drove to Middleborough on August 4 to collect the sparkler; Maria’s jewelry store – Gregory Scot Jewelers – gave the band a professional cleaning to get rid of the decades worth of dirt and water, and Glenn returned the sweet gesture by bringing the couple candy from his store.

Glenn said’ ‘When I went to pick it up, it didn’t fit me so it had to be resized. A lot of years have gone by after all.

‘It hasn’t brought me back to 1973 but it is fantastic to have it back on my finger,’ Glenn said. ‘It’s a great story, my family loved it. It’s a real feel good story.

‘They’re keeping the exact location of the pond secret though, it’s a lucky spot.’