Home » Lifestyle » Why do so many high-achieving women suffer from crippling anxiety?

Why do so many high-achieving women suffer from crippling anxiety? Mumpreneur award winner reveals how she was hit by an attack at the moment of her greatest triumph

When Sarah Pittendrigh stepped on stage at the NatWest Everywoman Awards three years ago, it was the pinnacle of her entrepreneurial career.

A former single mum who had faced bankruptcy and serious ill health, she’d worked tirelessly to turn her life around and build a new business, gaining not just financial independence but an enviable lifestyle in rural County Durham.

And now here she was, the first recipient of the Daily Mail’s Aphrodite Award, before an audience of Britain’s most successful female entrepreneurs at the swanky Dorchester Hotel in London. She should have felt ten feet tall.

Instead, Sarah was terrified. She could barely breathe. She plastered on a smile, but inside felt a knot in her stomach — not from nervous excitement, but a crippling anxiety so bad it had almost stopped her attending the event. ‘I ran up to the stage and couldn’t wait to get off it again,’ she says. ‘It was like, thanks very much, now get me out of here.

‘Later I was cross with myself. I should have felt proud. I’d come such a long way and I should have been able to appreciate the applause.

‘Instead, I hadn’t given myself the time to absorb how well I’d done. I was still like a hamster on a wheel, focused not on my present success but on my previous failure.’ 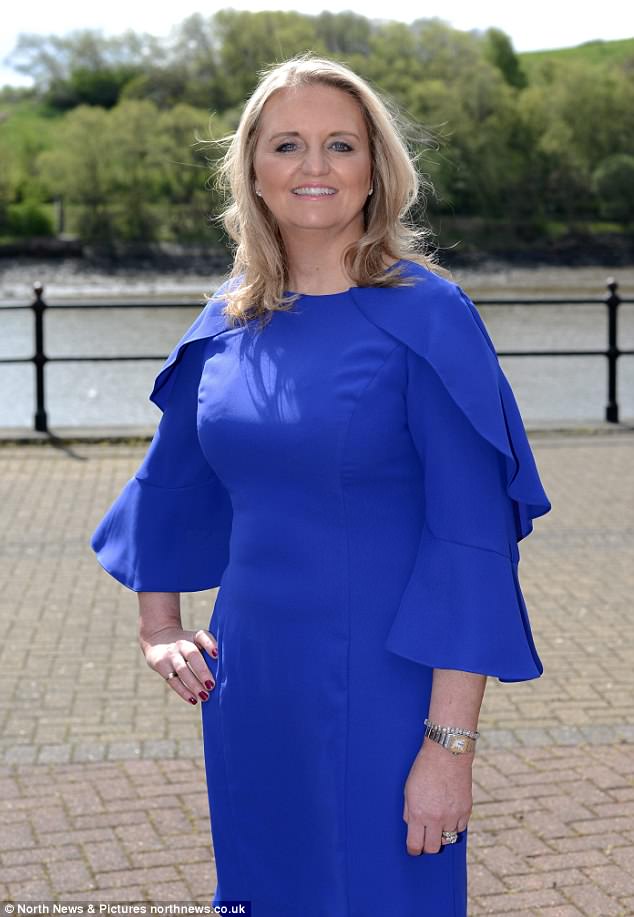 Sarah Pittendrigh, from County Durham, has revealed how she was hit by a crippling anxiety attack while collecting an award that marked the pinnacle of her entrepreneurial career

She is not alone. The life of an entrepreneur is inherently stressful, and those who start their own business are at considerably higher risk of suffering some form of stress disorder than those who don’t.

A 2015 University of California survey found that 49 per cent of self-starters struggled with a mental health issue. And while men tend to self-medicate by drinking too much, women are more prone to suffering with anxiety.

‘Women are twice as likely as men to be diagnosed with anxiety,’ says Tania Diggory, author of the book This Is Calmer, whose London-based company Calmer supports the mental wellbeing of entrepreneurs and their teams. ‘The early years of a business are often mentally exhausting, and for women there are lots of competing demands on their time. That can easily trigger anxiety.’

Women who start their own businesses are often high achievers already, with a perfectionist streak that puts them under more pressure — especially if they are the main family breadwinners, like Sarah. Burnout rates are high, and when a business fails it’s hard to shake off the sense of defeat.

‘I understand what that’s like,’ says Tania. ‘During the early years of my second business I experienced a spell of depression and anxiety, and carried that feeling of failure with me into another venture.

‘I’ve learnt that successful business owners are able to flip that sense of failure on its head and instead see it as an investment of time and energy that teaches them valuable lessons. But that’s not easy to do, and it’s important that women entrepreneurs know it’s OK to struggle.’ 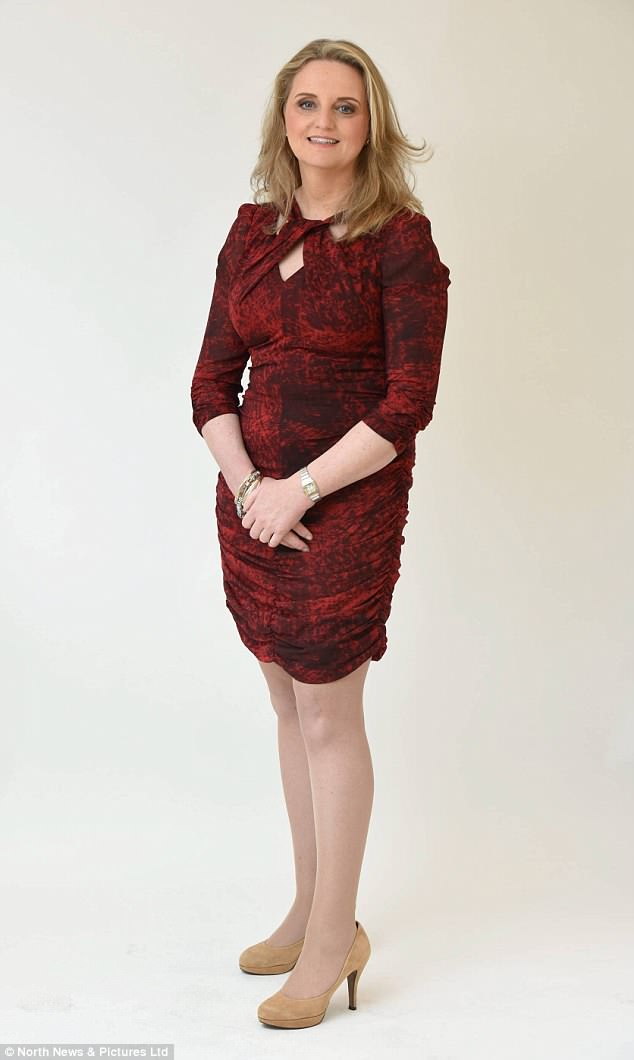 Today, Sarah describes her anxiety at the awards ceremony as a result of unprocessed emotion from her days ‘at rock bottom’, when her first business project hit a wall and she stood to lose everything.

Since then she has learnt to be ‘much kinder to myself’ and — as nominations for this year’s Aphrodite Award come in — she has started a consultancy to help other would-be entrepreneurs conquer their career woes and fears of failure.

Research by NatWest shows that 12 per cent of women want to start their own business, but less than 5 per cent actually do. When asked why, they cite caution as the main reason.

‘Some women say anxiety is holding them back, though my consultancy work is more general than just dealing with that issue,’ says Sarah.

‘Talking to someone who has been there, done it and can listen with empathy is key to working it out.’

You could hardly find someone better qualified to advise than Sarah. 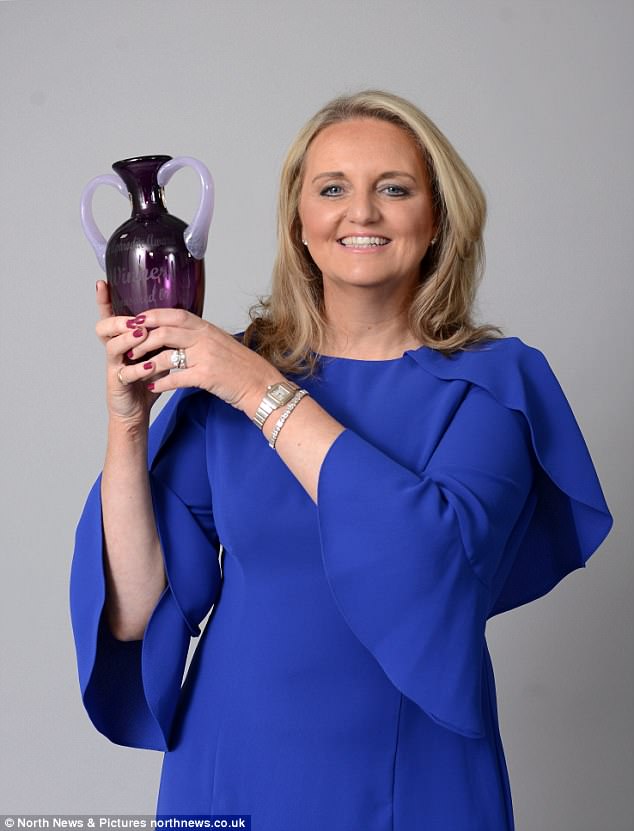 Sarah, a former single mother who had faced bankruptcy and serious ill health, had worked tirelessly to turn her life around and build a new business. She won the Daily Mail’s Mumpreneur Aphrodite Award

It was in the summer of 2008 that she found herself staring into the bottom of a teacup in a cafe, horribly aware that she would have to wind up her first business, in events management, which she had started after leaving a salaried job with Jaguar Land Rover.

Recession had stifled, then killed off demand for her company’s services. The only way out was bankruptcy.

‘I’ve always been a bit of a worrier, but this was a whole new level of anxiety,’ she says.

‘I was used to being in control of my life, being financially independent and the owner of my own home, then that control was taken away.’

Divorced from her farmer husband Stewart in 2002, she prided herself on her strength as a single mum. 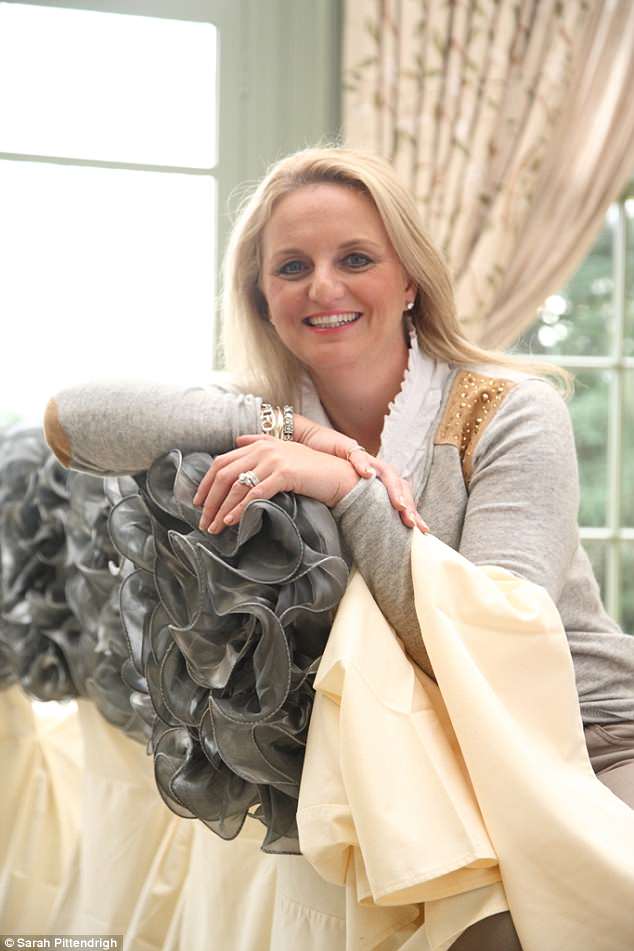 Sarah began to suffer panic attacks that left her scarily short of breath.

At night she would lie awake. Yet even as anxiety gripped her, she was determined to banish it.

‘I think there are two kinds of anxiety — destructive anxiety, which puts people in a dark place where they can’t see a way out, which is when they need professional medical help. And then there’s the kind I had, which was more positive. It was a sort of fuel that drove me on.

‘Yes, it kept me up at night, but as I lay there I wasn’t catastrophising. I was thinking about a new business.’

At the root of it all lay an even more fundamental drive.

‘The reason I got back on my feet was simple, really,’ she says. ‘I was a mother. I had to provide a future for my son, who was then just nine. Crumbling was never an option.’

Sarah started to see a counsellor and talk her problems through. And then came a ‘light bulb moment’: remembering how difficult her brother had found it to hire beautiful linen for his wedding that year, Sarah decided to research the wedding decor business. If chair covers were so hard to come by, she would start her own venture supplying them. 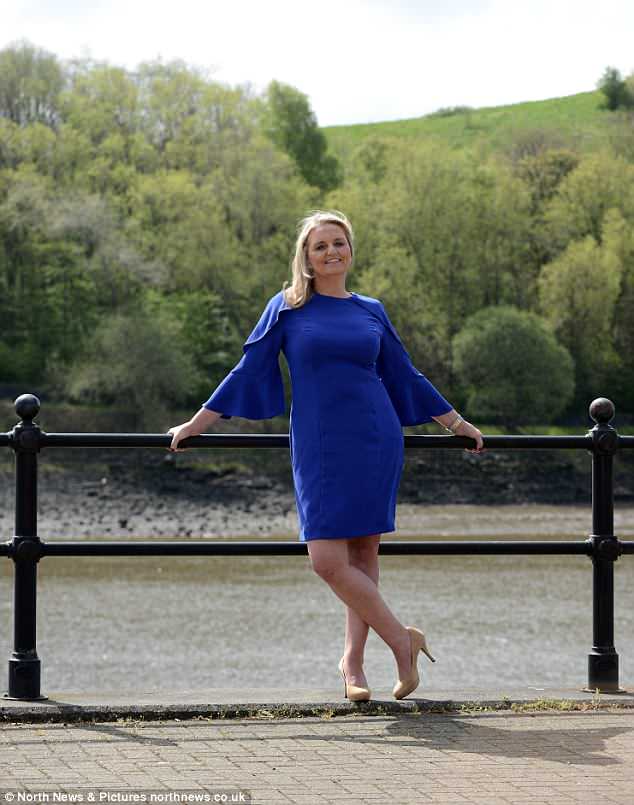 Sarah says she’s become good at switching off, taking walks in the country and riding horses

Having been declared bankrupt, she couldn’t borrow money, but the slamming of doors in her face simply made her more determined.

With a start-up grant of £8,000 from a government agency that supported small businesses, she persuaded her parents to loan her money from their retirement nest egg, and Simply Bows and Chair Covers was born — a wedding chair hire and cover business that she eventually turned into a franchise, with 12 offices around the country.

1. Celebrate your wins, big or small. Take a moment to enjoy your triumphs.

2. Be kind to yourself. Talk to a friend or mentor, exercise, eat healthily.

Take a step back to understand why you are feeling overwhelmed. Give yourself a break and find out what helps you.

3. Keep a journal. Write down how you feel when you’re anxious so you can look back to see how you may be sabotaging your progression.

4. Feel the fear and do it anyway.

The more times you overcome a situation where anxiety is taking hold, the more you’ll be sure that next time you can overcome it.

5. Don’t bottle it up. You can’t always spill every thought to colleagues, friends or family.

Some anxiety issues need to be treated by your GP and medically managed. If they are getting in the way of your day-to-day life, don’t be afraid to seek professional advice.

‘My parents’ support was vital,’ she says. ‘You can get through anything if you have family and good friends around you.’

By the time she won our Mumpreneur Aphrodite Award, she was making £100,000 a year profit, and her future looked brighter than ever.

And yet, as the business took off, there was another reason to ease up on the workaholism. Twice — in 2014 and 2015 — Sarah had a malignant melanoma (a patch of skin cancer) removed from her body, and she knows it could return.

‘That did change my life,’ she says. ‘It made me more reflective and much less willing to stay on that wheel, running round all day. I’m really good at switching off now.’

When she needs time alone, she likes to walk in the countryside — each year she does the 26-mile ‘Mighty Hike’ for the Macmillan cancer charity, and she also rides horses. Indeed, her son, Will, has become a professional equestrian — the little boy who inspired her in 2008 is now 19.

There is even a romantic twist to Sarah’s story, as in 2012 she remarried her ex-husband, Stewart. ‘We’ve been friends since childhood and we probably got married too young the first time,’ she says. ‘It did us good to have a break — sometimes you don’t realise how good something is until it’s gone.’

Together, in between running Simply Bows and Chair Covers, they have spent the past year renovating buildings on Stewart’s family farm, a lucrative new line in property development.

Despite her anxiety at the awards ceremony, the Aphrodite Award has been great for Sarah’s self-esteem and for her business profile. ‘Being your own boss is wonderful in lots of ways. It can give women the flexibility to spend time with children when they’re little.

‘But it’s also hard work and can be a lonely place,’ she says. ‘Take all the praise and appreciate it when it comes.’

COULD YOU BE OUR MUMPRENEUR OF THE YEAR 2018?

Have you started a business while being a mum? Then enter our Daily Mail/NatWest Everywoman Aphrodite Award for Mumpreneurs.

You must be based, or have your chief operations, in the UK, and must have set up your own business from scratch while raising a child or children aged 12 or under. 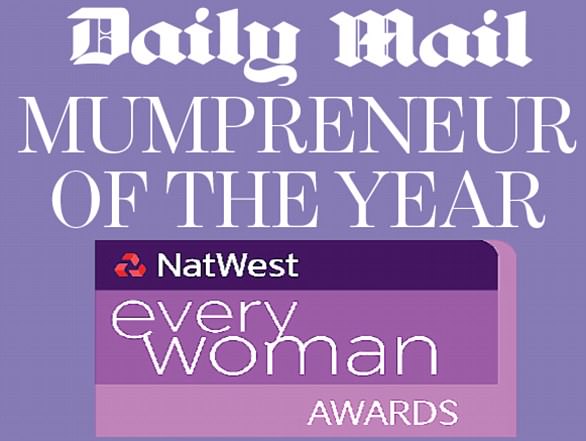 You must be able to show you are the key company owner, and must have been in business for longer than 18 months as of the nomination deadline of July 2, 2018. The business must also generate a profit. Nominations and evidence must be received by July 2.

Please ensure you are available for the judging day (in London, October 3) and awards ceremony (December 5). The judges’ decision will be final. No correspondence will be entered into before or after the judging.

Entrants must agree that their story can be featured in the Daily Mail. They can be nominated or enter themselves.