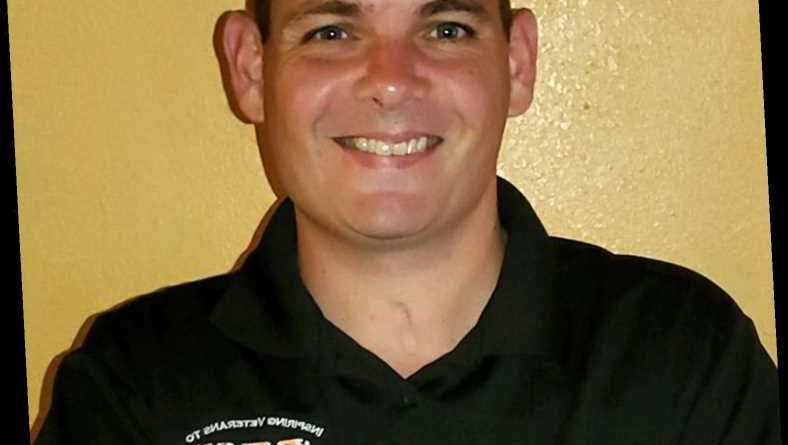 Michael DeLancey is refusing to let an injury define his life — and he's hoping to inspire other injured veterans to do the same.

DeLancey, 35, tells PEOPLE his life was forever changed on Sept. 1, 2006 when he was critically injured in a sniper attack during the war in Iraq. At 21, DeLancey was serving his third year in the U.S. Marine Corps, and doctors believed he wouldn't survive.

But DeLancey defied the odds, and though he's now paralyzed from the chest down and only has one functional lung, he is using his experience for good.

In 2015, he started Wounded Warriors Abilities Ranch (WWAR). The nonprofit, based in Florida, encourages veterans to get out and be active by offering a variety of sports and activities in the Tampa Bay area.

"I'm paralyzed from the chest down, but it actually opened up so many opportunities," DeLancey says. "Looking back at all the things that I've accomplished and the people that I've helped so far, things do happen for a reason." Though the incident happened close to 15 years ago, DeLancey says he "remembers pretty much everything" about the day.

"We had a local sniper in the area that we were after and we were on dismounted foot patrol and I remember hearing gunfire and trying to fire back," he recalls. "When I tried to stand up, I noticed that I couldn't and I tried to yell out, 'I'm hit!' but nothing was coming out."

"The next thing I knew, our medic got to me, and once I got loaded on the helicopter, I don't remember anything for the next month and a half," he adds.

DeLancey was eventually airlifted to Al Assad Airbase in Iraq before being transferred to a hospital in Germany, and later he was moved to Walter Reed National Military Medical Center in Washington D.C.

In a YouTube video he posted, DeLancey said he was told that he "died five times" during that time. DeLancey says doctors ultimately learned that the bullet entered through his left shoulder, shattered his seventh vertebrae and broke apart in his right shoulder.

The swelling around his spine ended up cutting off his oxygen flow, which caused paralysis. He also had two of the three lobes in one lung removed through multiple operations.

"I don't remember any of that… they were telling my family, 'He's not going to make it through the night,'" he explains. "I spent 40 days in the ICU [before] I started remembering the conversations I was having."

"When I woke up, a lot of it was a learning process," DeLancey continues. "What I can, what I can't do. What's going to happen? Am I going to be retired? How am I going to deal with this medical situation? You start thinking of just long-term things."

After more than 50 days in the hospital, DeLancey was discharged and made his way back home to Tampa, where he started rehab and adjusting to his new normal.

During that time, DeLancey would often spend time with his friends, taking part in their typical activities, like boating and kayaking — a process that helped him figure out what was viable in a wheelchair.

He then started making trips back to Walter Reed with his dad and began to speak to the injured service men and women to let them know what was possible in life after the hospital.

"We started advocating, telling them, 'Hey, there's this and this out there for you,'" he recalls. "It's the greatest feeling in the world when they come back and they're like, 'I appreciate you letting me know about this. It really changed my life.' That got the ball rolling on me working with other nonprofits and eventually founding my own."

With the help of his dad, DeLancey launched WWAR in 2015. It wasn't long before they were approached by the City of Pinellas Park to help build an accessible, 10-acre recreational park.

"We wanted to make it not just wheelchair accessible, but designed around people in wheelchairs," he explains. "I could go to a regular park and see a ramp, but then I've got to go 300 feet out of the way just to get on the sidewalk. I wanted people to come and look at this park and say, 'Okay, this was definitely designed by somebody in a wheelchair.'" The park — which includes a walking trail, basketball court, playground and outdoor fitness station — is where DeLancey hosts many of the nonprofit's sporting events and clinics.

He has started an adaptive rugby team and basketball team, and he has plans to create a softball team — all of which support WWAR's goal of meeting the physical and emotional needs of veterans. He's also welcomed civilians who are in wheelchairs to join WWAR's adaptive sports teams and enjoy his public park space.

"If I have the opportunity to help somebody, I can't turn my back on them. I'd never be able to live with myself," he says. "With WWAR, I know there's somebody that's going to see me or the others, and they're going to say, 'Wow, look what they're doing. I can do the same thing.'" As he continues to make a positive impact in his community, DeLancey says he hopes other injured veterans across the nation can learn from his story.

"Just because you have a setback, you can always aspire to be more," he says. "Get out of that mentality of feeling sorry for somebody in my situation, feeling sorry for yourself, and go out there and pursue what's going on."

"There's always going to be a positive in every situation that you go through," he adds.

Those interested in volunteering, sponsoring or donating can learn more about WWAR here.