Home » Lifestyle » My marriage is more important than housework

We have a fairly traditional division of labour in our house, in that my husband thinks we share the domestic duties 50/50, and I think that's rubbish because mowing the lawn once a month in no way equals the meals I cook on an almost nightly basis. 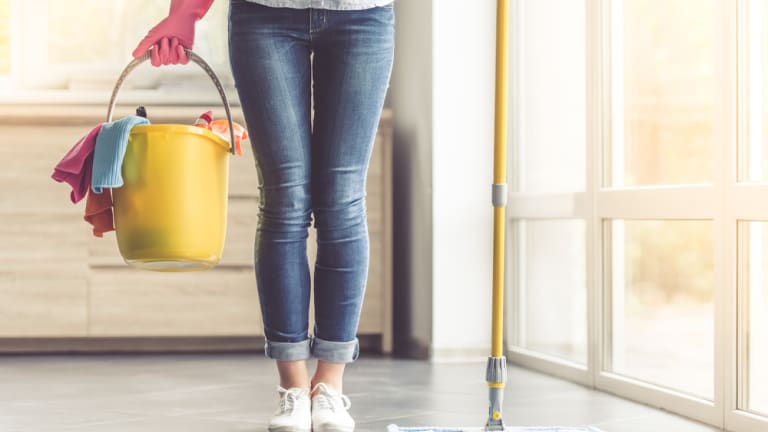 When I returned to a vacuumed house, I thought Iʼd accidentally broken into my neighbourʼs place.

It's a very boring argument. We've been together 20 years and still we fight over the fact that he leaves a dirty bowl in the kitchen sink rather than putting it in the dishwasher. I mean, how hard is it to open a dishwasher door? And I send him crazy by leaving my shoes all over the house.

I tried to settle it once by suggesting we write down everything we do in a day, for a week, so we could compare our actual division of labour. But he very quickly decided that score-keeping is petty and we're best to just drop the subject. Convenient, huh?

I know I sound naggy, and I hate it. I hate being that person with my partner and that energy in the house. It pushes my husband away and makes me the least-fun person to be with. As our daughter says, "Mummy is angry all the time."

I also hate the exhausting battle, but refuse to drop the point because gender equality is important to me. I will not have our daughter grow up with role modelling that incorrectly teaches her that housework is a woman's job.

Plus there's the very real fear the cockroaches will completely take over. I'm not joking. The mess can get that bad. Trust me, I don't have display-home expectations. I'm not styling my bathroom with scented candles, I don't have a series of different-sized cushions on my bed, à la The Block. The only time our place is properly clean and looks even a little bit fancy is when we're having visitors. Generally, I'm just happy if the house doesn't look like we're squatting. And I don't think I should have to do that on my own.

But recently I got fresh insight. I was overseas by myself. No husband, no kid. No housework. It was bliss.

Except for the extreme mother-guilt I felt at leaving my daughter to fend for herself in a house that, going by my previous trips away, was unlikely to see a vegetable. Having heard endless tales of drive-throughs and Uber Eats last time, I genuinely worried the little thing would never poo again.

This time around, though, my husband totally stepped up. There were Sunday morning trips to the market. He cooked almost every night – green food even. He baked cupcakes for the school cake sale. He even cleaned out the pantry which, given the 'roach problem, was very brave.

When I returned to a vacuumed house, I thought I'd accidentally broken into my neighbour's place. It was the best welcome home I could have asked for. But why is basic housework kept for when Mummy's away? How can I keep Super Dad from disappearing down the back of the couch with the muesli-bar wrappers?

I could form theories, but instead I asked him. He told me that I'm too impatient and that if I waited long enough, he would do what's needed.

This kills me. A child can't eat dinner on a school night at 9pm when her bedtime is 7.30. I don't want my laundry to sit on the line for an entire week. And if I waited any longer for him to do grocery shopping, the only thing to eat in the house would be the cockroaches, if we could catch them.

So I'm left with no real answers, just a mixture of frustration and resignation. You could say that if I'm still trying to change a person 20 years after moving in with them, I'm either an optimist or completely deluded. But what we both are is tolerant – of the endless push and pull that domesticity brings. To know we bicker and whinge, but we still fall into bed together each night, mostly happy, even if the bed hasn't been made for three days. And we try to remember that there is joy in doing something for the other.

I hope that's pretty good role-modelling for our daughter.