Cloak & Dagger, the new Marvel series on Freeform, gives Marvel fans two new heroes to root for with supernatural abilities that even they don’t exactly understand at the beginning of the story. What exactly are Tandy’s powers on Cloak & Dagger? The dagger symbolizes a lot, according to the actor who wields it on the show.

"I think her mind and her heart are kickass," says Olivia Holt, speaking over the phone ahead of the premiere. "I think as far as her physical ability, all of that starts coming into play once she can start to manifest the dagger."

In the comics, Tandy Bowen is exposed to experimental drugs and becomes able to shoot six-inch daggers made of a fictional energy called "lightforce" out of her fingertips. The daggers can, like, stab things. MCU fans are already familiar with "darkforce," as it has appeared on Agent Carter and Agents of S.H.I.E.L.D. — and lightforce is its opposite.

"I just remember shooting scenes with the dagger and feeling this empowerment," says Holt. "I finally have control and it’s this innocent control too, not in wanting power but in wanting something that’s equal and fair." That want speaks to the #TimesUp and #MeToo movements, Holt notes. The platform that women have gained just in the past year to call out harassment and injustice is about beginning to correct an imbalance of control and a lack of fairness.

"Tandy is a young woman who has had to carry so much on her back for so many years," says Holt, "and now finally having this ability is giving her so much perspective. It’s this fierce force of pure light that is helping her find her light in her own way. Helping her find the light that makes her feel the best ‘her’ in so many aspects. It symbolizes this incredible force of empowerment." 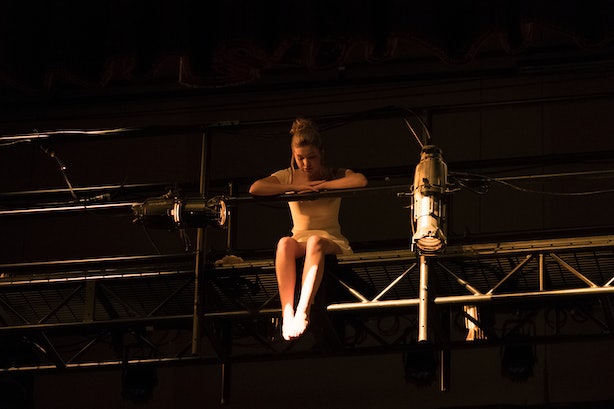 On the Freeform series, Tandy isn’t born with the dagger abilities. After an accident at Roxxon Oil (which, cough cough, also appears on Agent Carter), Tandy and Tyrone fall into the same body of water and are hit with a blast of energy. Their powers don’t manifest until years pass and until they find each other again. Both teenagers also experience individual losses that night and are changed because of it.

"I think before the traumatic experience she has a really awesome life," says Holt. "Great hobbies, great home life where she is loved and supported. Now she’s living in survival mode. She’s the mother in her relationship with her mom and she’s struggling with the ability to feel wanted and loved. Life took from her and that’s her goal, she wants to take it back."

In Marvel comics, Tandy is ultimately able to do a few other things with her powers, including detoxing those she touches. Yes, like a human juice cleanse. She can also use her lightforce to brighten spaces, track people in danger, and even cure drug addictions. Those hit by the lightforce can be drained and killed if Tandy chooses, or make a villainous person rethink their criminal activity after she projects a vision of what their lives would be like if they made better choices.

Whether or not those powers will crop up on Cloak & Dagger as Tandy learns how to control the fierce force that is the dagger remains to be seen. The series is an origin story, after all, and fans are along for the ride with Tandy as she comes into her own as a hero. She’s looking to take back and make sense of an unfair world again, and daggers of light are an excellent way to start.