Maryland Gov. Larry Hogan, whose wife is from South Korea, claimed in an editorial for The Washington Post that President Donald Trump called South Koreans “terrible people” during a Republican Governors Association dinner in February.

According to Hogan, a Republican, the remarks were made during one of Trump’s “unscripted rally speeches that seemed to go on for at least an hour too long.”

“He talked about how much he respected President Xi Jinping of China; how much he liked playing golf with his buddy ‘Shinzo,’ Prime Minister Abe of Japan; how well he got along with North Korean dictator Kim Jong Un,” Hogan wrote in the editorial, published Thursday. “Then, the jarring part: Trump said he really didn’t like dealing with President Moon from South Korea. The South Koreans were ‘terrible people,’ he said, and he didn’t know why the United States had been protecting them all these years. ‘They don’t pay us,’ Trump complained.”

Hogan wrote that his wife, Yumi Hogan, was “sitting there as the president hurled insults at her birthplace,” but managed to endure the speech “politely and silently.”

Yumi Hogan, born in Naju, South Korea, immigrated to the United States in her 20s, married Larry Hogan in 2004 and is the first Korean American first lady of a U.S. state. 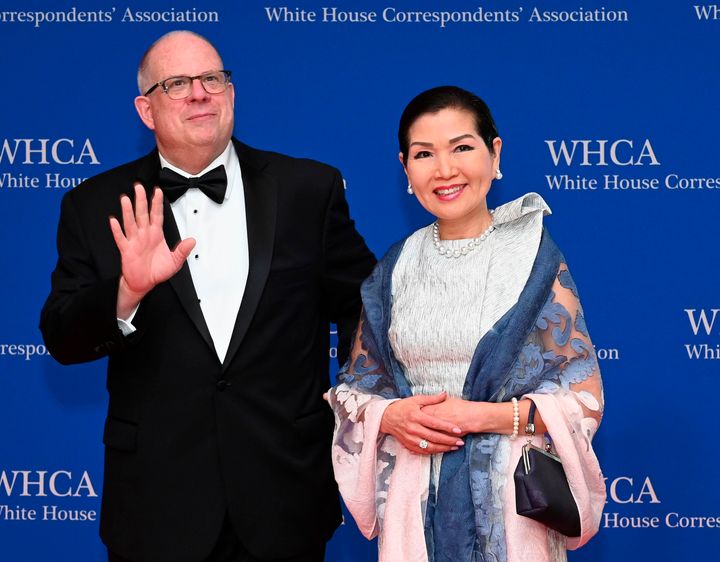 The remainder of Hogan’s editorial points out that Trump’s disparaging comments are ironic considering the White House’s “patchwork response” to the coronavirus pandemic in comparison with South Korea’s coordinated, widespread tests.

Hogan said the White House “failed to issue public warnings, draw up a 50-state strategy or dispatch medical gear or lifesaving ventilators from the national stockpile to American hospitals,” leaving America’s governors in a “sink or swim” situation.

“Luckily, I had a special ally on my side: Yumi Hogan,” Hogan wrote, explaining that his wife was instrumental in securing Maryland’s purchase of 500,000 COVID-19 tests from South Korea by participating in calls with Korean Ambassador to the U.S. Lee Soo Hyuk.

The purchase, which was negotiated between the Maryland government and Korean health care company LabGenomics, was announced in April as “Operation Enduring Friendship,” and according to Hogan, cost $9 million ― “a bargain considering the $2.8 billion in revenue we projected the pandemic would cost Maryland.”

Hogan’s decision to purchase tests from South Korea was critiqued by Trump shortly after it was announced, with the president saying the Maryland governor “didn’t understand too much about what was going on,” and “could have saved a lot of money” if he had carried out tests through federal laboratories instead.

“The president’s comments that day seemed to confuse test kits with testing labs, but whatever,” Hogan wrote in his editorial. “It was a great day for Maryland.”

The White House fired back at Hogan’s editorial the same day it was published, with press secretary Kayleigh McEnany calling the governor’s words “revisionist history” and referencing the fact that Hogan had praised Trump during a video teleconference on March 19 for his “great communication.”

“What is so striking to me about reading that op-ed is Governor Hogan begins with this dramatic April 18th scene where South Korea delivered tests, but just the day prior, he said something entirely different,” McEnany added. “He, in fact, thanked the President for the progress we’ve seen in federal and state coordination in recent weeks.”

McEnany did not address Hogan’s remarks regarding Trump’s comment on South Koreans.

Speaking to CNN, Hogan responded to McEnany’s claims, saying that McEnany was “tak[ing] a piece of a conversation.”

“When I think progress has been made, I give them credit,” he said, adding: “When the president and his team are doing something right, I praise them, and when they’re doing something wrong, I’m not afraid to say so.”

Hogan is about to embark on a virtual tour for his book, “Still Standing: Surviving Cancer, Riots, a Global Pandemic and the Toxic Politics that Divide America,” which is scheduled for a July 28 release and outlines his rocky relationship with Trump over the coronavirus pandemic. The governor briefly considered running for the 2020 Republican presidential nomination before deciding against it, though he hasn’t ruled out another attempt in 2024.