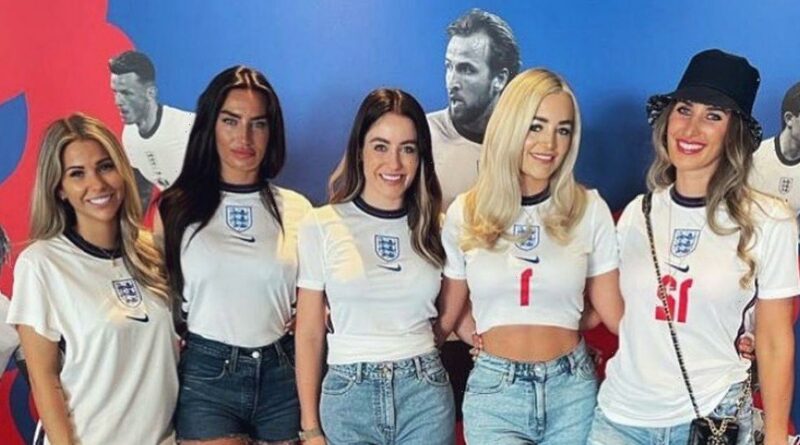 The 2022 World Cup has begun in Qatar with all eyes on the England team as they arrive in the country ahead of the tournament.

And no doubt will the activities of the team’s wives and girlfriends be followed as much as their partners, with the women reportedly staying on the £1 billion luxury cruise ship MSC World Europa during their time in the Middle Eastern country.

The ship, which has 21 decks and 33 restaurants, will be docked just off the coast of Doha throughout the tournament.

The WAGS are amongst the 7,000 guests staying on board the liner, which has a huge pool and jacuzzi on the top deck, as well as a 75m drop silver slide.

It’s said a separate hold room has been made available for the women to use as a “walk in wardrobe” and that many of the women have worked with stylists ahead of the event to help them with the country’s modest dress customs.

But who are the wives and girlfriends of the England football team? Read on to meet them..

Sasha Attwood is the childhood sweetheart of Jack Grealish, with the couple having met in school as teens.

A successful model and influencer, 26 year old Sasha has starred in a huge number of fashion campaigns, including signing a lucrative deal with Boohoo, with the couple previously hinting that they see marriage in their future.

Fern Hawkins and Harry Maguire married in July 2022 after over ten years together and the couple share two children together.

A seasoned pro when it comes to WAG duties, Fern, 28, was also there to support Harry when England reached (and lost) the semi-finals in the 2018 World Cup. Paige Milian is the fiancee of Chelsea star Raheem Sterling and the couple share two children together: Thiago and Thai.

The couple reportedly met during Raheem’s time playing for Queens Park Rangers when Paige was working in JDSports and now live together in a mansion in Liverpool.

Raheem fiancee has a degree in property development

Georgina Irwin is used to the jet-setting lifestyle from her day job as a flight attendant for British Airways.

The 26 year old got engaged to goalkeeper Aaron Ramsdale in the summer of this year, so it seems wedding bells are on the horizon for the happy couple.

Anna Modler is engaged to Spurs star Eric Dier. The 24 year old works as a model and is of South African and Namibian descent, according to her Instagram.

The couple got engaged on 4 November and announced it in a sweet post where the model wrote: “I said ja”.

Megan Davison and Jordan Pickford finally got their dream wedding this summer after they jetted off to the Maldives to get married for the second time.

The couple had their first ceremony cancelled by the pandemic so opted for a registry office the first time around in 2020.

The couple, both 29, are parents to children Ivy, five, Vivienne Jane, four, and one-year-old Louis and Kate is a fitness instructor with a degree in sports science. Annie Kilner, 30, met England defender Kyle Walker when they were teenagers but they briefly split up in 2019 after nine years together.

The brunette beauty secretly tied the knot with her long-term partner Kyle, who plays for Manchester City, late last year.

The couple share three sons together, Roman, Riaan and Reign.