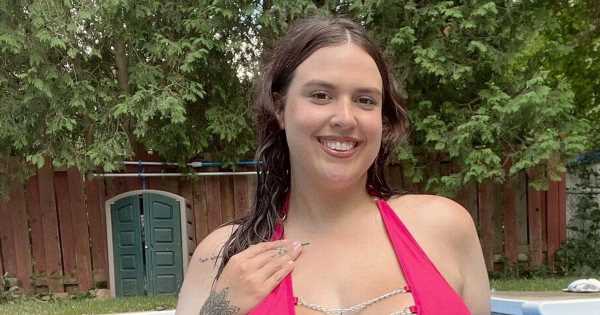 A social media sensation who also makes money as a curvy model is enjoying internet fame with her videos regularly going viral.

Steph Oshiri has acquired just shy of eight million likes on TikTok and she is now known as the woman with the 55-inch bum.

With her stardom on the rise, we take a closer look at her life.

READ MORE: Plus size model wows in dress held together by string alone – but trolls say 'cover up'

The plus-sized beauty is a Canadian sex worker who earns a living by stripping off on OnlyFans.

And in a candid video, she recently acknowledged that there was a direct link to her troubled childhood to now selling sex.

She told her fans: “I will never deny the fact that my childhood had influenced me choosing to get into this line of work. It is something I have talked about extensively with my therapist.

“I crave chaos in my life and I sought out chaos in some really dangerous and unproductive ways and this was actually the healthiest, most stable way for me to seek out a bit of risk in my life.

“For me, I do a job that is high risk, high reward that can have a lot of consequences to it and that is because I grew up in a really chaotic household.”

She then opened up about troubles with her father and how he left when she was just nine.

Steph said she now has the support of a therapist and a close network of loved ones who help her to enjoy a happy and secure life.

And she added: “I understand this is a very taboo thing to talk about and my story is not going to be every other sex worker’s story.

“There is tonnes of people who get into this type of work who come from amazing, loving homes that just isn’t my story and I would never deny the fact that it has impacted me to get into this industry.

“But with all that being said I am incredibly happy and I could not stress enough how secure and grounded my life is.

“I just feel so blessed to be in the position I am in and so blessed to have an outlet for those riskier sides of my personality and I am able to do it in a really safe and secure way.”

She makes fortunes flaunting her curvy figure and pockets £28,000 a month on OnlyFans.

Steph joined the kinky site in 2020 after quitting her job as a makeup artist and at first hid her face on camera, while still making up to £1,800 every month.

But despite her income skyrocketing since revealing herself fully, it has led to trolling.

"Others, shame me for my body and career choice. I've been told often by men to 'get a real job' and that I should be ashamed my money comes from sex work.

"It's funny to me because men are predominantly the ones creating the demand for this industry in the first place."

One cruel troll also said she was “seconds away from a heart attack” because of her size.

And referring to online abuse, she said: “It's not a normal thing to receive this type of hate, especially not in the capacity I deal with it. I think most would struggle with it. Your mental health at times will suffer."

She recently hit the headlines again after revealing she sneaks bottles of booze in her massive bum.

She said the trick comes in handy for music gigs and her clip has been watched almost 60,000 times.

She told viewers: One thing I used to do when I was younger was hide full alcohol bottles in my bum. I'm not kidding. I wish I was.

"Every time me and my friends would go to concerts, I would be the person that would have to hide the alcohol. I wish I was joking."

As for the new year, the wealthy young creator is keen to keep her success going.

And she believes she would not be as popular if her famous bum was smaller than it is.

Steph said: “Obviously, the majority of my audience subscribes to me for my wide hips and bum. I definitely don't think I would be as successful if my bum was smaller.

"My goal is to one day hit the £82,000 ($100,000) per month milestone! I definitely want to be known for more than just being a sex worker. I would love to one day start my own clothing line or plus size lingerie!"