Ready for her close-up! Meet Pumpkin, a once-abandoned raccoon, who is now living her best life.

Pumpkin, also known as Pumps, was rescued at just 1 month old, when she fell out of a tree in Rosie Kemp’s backyard in the Bahamas, where it’s legal to have the animal as a pet.

The adorable raccoon had a broken leg and was very weak after her accident, but Kemp nursed her back to health. Little did she know, Pumps would become part of her family. Kemp did the responsible thing and waited for the animal’s mother to return, but when the mom didn’t come back, the family took her in as one of their own.

Laura Young, Kemp’s daughter with whom Pumpkin resides, opened up about their initial reservations in a 2015 interview with the Today show. “When Pumpkin came into our lives, we were nervous because we had never raised a baby raccoon before, but with the guidance of friends that had experience, we cared for her,” she said at the time. “We want and always will do what is best for her!” 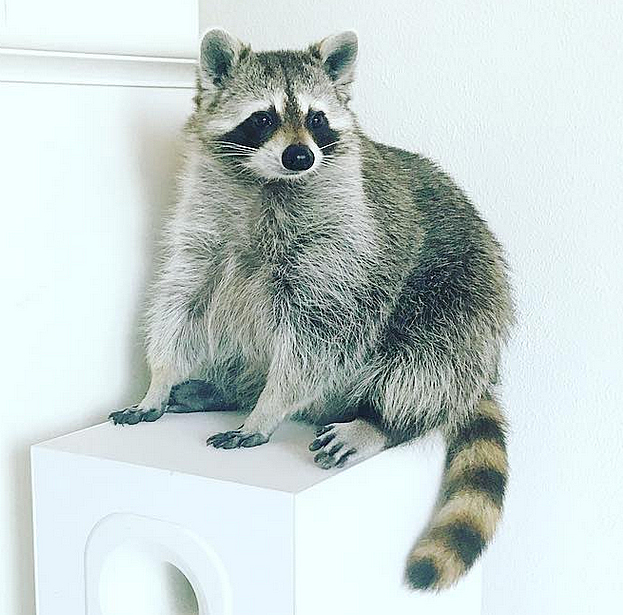 And it’s safe to say Pumps settled into home life pretty well. She’s got two canine siblings, Oreo and Toffee, who Young says Pumpkin considers “her moms.” She added: “She respects them when they have had enough rough play, and she loves to cuddle next to them when she is tired.”

Pumpkin is not only well cared for, but her owners also document her cutest moments — and favorite hobbies — with hilarious posts on Instagram. With more than 1.5 million followers, Pumps has become a well-known social media star.

But she hasn’t let fame get to her head. In fact, the furry friend is just like Us! She loves to eat refreshing fruits such as blueberries and watermelon, and enjoys lounging on the couch. Pumpkin is constantly getting into the cutest mischief such as climbing up cupboards in closests and playing hide-and-seek, taking advantage of napping as often as possible, and basking in the Bahamian sun.

In a recent Instagram post, Pumpkin walks alongside a glistening pool with a coconut in her mouth. “#flashbackfriday to when Pumps knew Pinacoladas were in order. ??????,” the caption reads. Another post shows the adorable mammal strutting her stuff while the dogs lie on the ground, glaring at her. “?What does a girl have to do to get bottle service around here?” the post reads.

And that’s not all! While Pumpkin’s social media presence is impressive, there’s more to her than cute internet photos. The raccoon boasts her own book titled Pumpkin: The Raccoon Who Thought She Was a Dog, which is about her life and sweet relationship with Oreo and Toffee.

Get to know Pumpkin better in the video above and follow her at @pumpkintheraccoon!