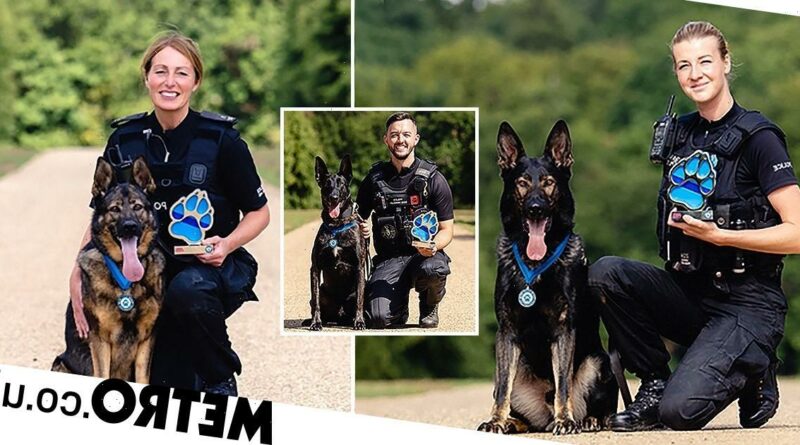 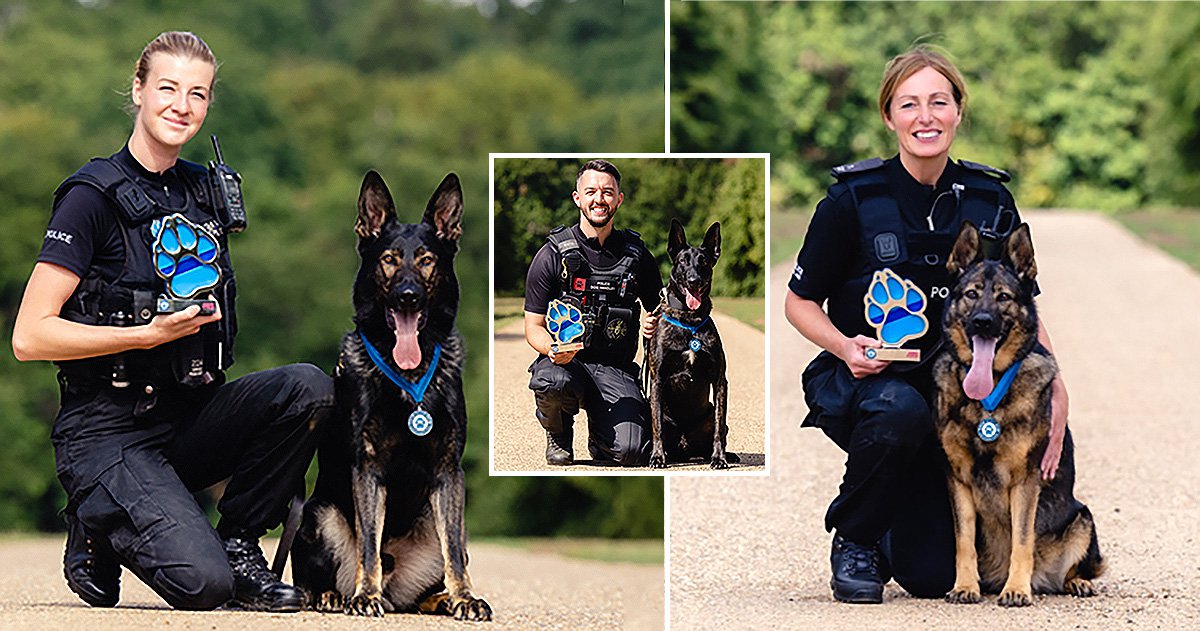 These police dogs are so barking brilliant they’ve each bagged themselves an award for their hard work in the line of duty.

The dogs being honoured have committed more acts of bravery than most of us humans could even fathom – including one magnificent pup who suffered three gunshot wounds to the head but never missed a day of work.

BBC News Presenter Rich Preston is set to host the glittering ceremony at Knebworth House in Hertfordshire, which will see more than 100 people and countless dogs come together to celebrate.

‘This year’s winners are prime examples of the incredible bravery, strength, specialist skills, and dedication these wonderful dogs show every day when they head out to work; as well as the important role dog handlers play in helping police forces across the UK fight crime.

‘This is our way of saying thank you.’

Thin Blue Paw aims to provide financial support to retired police dogs by helping owners, who often struggle to get insurance due to the dogs’ previous working lives, with veterinary care, medication and treatment to ensure they live long and happy lives.

So without further ado here are this years’ pawesome winners!

PD Astro from Leicestershire Police showed true bravery and loyalty to his handler, PC Grace Feavyour, when he jumped to defend her during a confrontational arrest in 2021.

The German Shepherd leapt into action when a man who was being detained turned on the young officer. As he protected his colleague, PD Astro was injured – but it didn’t deter him.

He grabbed the suspect and held him until he was restrained.

PC Feavyour said: ‘Astro is really special to me. I probably spend more time with him than anybody else.

‘Astro has always been a confident, brave dog even from about three months old.

‘He was puffing his chest out and barking at things when he was just a little tiny pup, and that’s extended onto his career.’

‘He’s been assaulted in the past and he’s defended me when I’ve been assaulted. I know whatever we’re faced withm we will always face it together.’

German Shepherd Logan, formerly of Humberside Police, was named the winner of the Lifetime Achievement award alongside his handler officer PC Ian Sweeney.

The duo received the accolade after working together to keep the streets of Lincolnshire safe over seven years.

Retired police dog Logan completed his training in a very quick eight weeks, and went on to secure incredible arrests, save countless lives and help keep his community safe.

Even after being shot three times in the head while protecting PC Sweeney and detaining three dangerous armed criminals in 2018, Logan never missed a day’s work.

PC Sweeney said: ‘He’s a perfect dog. I absolutely love him to bits.

‘There was an attempted murder in Grimsby and we were sent as part of a team to try and locate the person.

‘We did find the person and we didn’t know he had a firearm.

‘The subject turned the firearm on me and Logan and he threatened me and the dog.

‘I knew I had to send Logan to save me, potentially send him to his death, which was probably one of the hardest things I’ve ever had to do in my life with him, because you’re sending your best friend, your best buddy.

‘He shot Logan in the face and the head three times, but I wasn’t going to leave him. I went straight in behind him.’

PC Sweeney continued to tackle the man who was shortly arrested for several offences.

Luna had a natural ability for tracking, particularly high-risk missing people, and helped to lead officers and first-aid responders to vulnerable people such as elderly dementia victims who became lost in the dark, suicidal individuals who needed urgent help, and even kidnapping victims.

The German Shepherd retired earlier this year but will never be forgotten by the people she saved, or their friends and families.

PC McBride said: ‘She’s quite feisty but with the same token when she’s looking for missing persons and finds them she’s very gentle.

‘Over the years she’s located so many his risk missing persons and a lot of them wouldn’t be here today if it wasn’t for Luna.’

It’s the second year in a row that the crimefighting duo award has gone to the Cheshire and North Wales joint dog unit.

PC McDonough and Dutch Herder Toro have shown themselves to be a formidable crimefighting team and after just two-and-a-half-years, have huge success, particularly in tracking, with many arrests.

Toro earned himself a reputation on the force when he detained a suspect and dragged him out of a hedgerow by his ‘crown jewels’, with the footage making it onto TV.

PC McDonough said: ‘A vehicle was failing to stop. The lad on board had committed a spate of burglaries while he’d been out.

‘The lad saw us coming and tried to make a go for it so Toro has gone straight into the hedgerow grabbed hold of him by his crown jewels and dragged him out.

‘We’re best mates. My Mrs says that I love him more than I love her.’

Police Dog Eddie from Greater Manchester Police and PC Andrew Kenyon – who followed in his father’s footsteps to become a police dog handler – won because of their natural talent and commitment to duty.

In just two years they’ve had more than 60 arrests and assisted on serious jobs, such as protecting a colleague who was being attacked with a crowbar and catching dangerous criminals.

PC Kenyon said: ‘We get on really well, we are always together. I’m sure he’ll grow and grow to become even more successful.’

The ceremony is also supported by Animal Friends Insurance and Barking Heads, the latter of which has vowed to provide free dog food for life to the retired police dogs of the Thin Blue Paw foundation.

A spokesperson for Barking Heads said: ‘Barking Heads are absolutely honoured to continue to provide free food for life to the retired police dogs of the Thin Blue Paw Foundation.

‘They’ve done so much to keep families and communities safe that we wanted to do what we could to make their hard-earned retirements easier.’