Australia's "lockdown mindset" in response to COVID-19 risks doing more damage than the virus itself, particularly to the lives of young people, says University of Melbourne vice-chancellor Duncan Maskell.

Professor Maskell, an expert in infectious diseases and the head of Australia’s wealthiest university, said Australia had to move beyond the lockdown phase of its response or risk experiencing even greater loss of life from poverty and suicide. 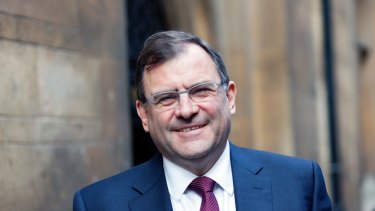 "At what point do the measures that we take to suppress the infectious disease rate actually start to do more damage than the disease itself?" Professor Maskell said.

"I’m very concerned actually that if we carry on in this kind of lockdown mindset for too long, we will seriously damage young people's lives."

The vice-chancellor made his remarks in an online forum hosted by the university’s faculty of science as part of National Science Week on Wednesday night.

"We already know that there are … some death rates that have increased, there’s more suicide going on at the moment," he said.

"If we have an economy that’s not functioning, we’ll have serious poverty problems which we all know, lots of studies show will lead to increased morbidity and mortality in society."

Pandemics and infectious diseases have occurred throughout human history, Professor Maskell said, but modern society has reached a point where we believe we can control natural disasters.

In a forum exploring the role of universities in crises, the vice-chancellor also took aim at politicians and social media for eroding public trust in scientific expertise.

"Every single person on the planet who has a social media account feels they have the right to not just comment on stuff, but have their comment taken seriously," he said.

"And so the number of people you see commenting on complicated issues with simplistic sound bites is really quite frightening."

Politicians around the world also spurned scientific findings that clashed with their own interests and ideological beliefs, he said.

Coronavirus has so far infected more than 22.2 million people and taken 783,000 lives worldwide.

About 24,000 people in Australia have tested positive to the virus, with almost 500 lives lost, including 376 in Victoria.

The Andrews government has imposed a six-week, stage four lockdown across greater Melbourne in response to the second wave of the virus, which has been far deadlier than the first wave.

The national cabinet has also introduced strict restrictions on travel into and out of Australia.

These travel restrictions have destroyed Australia’s market for international students. Universities Australia has estimated the sector could lose $16 billion in revenue between this year and 2023.

Professor Maskell said his "primary objective is to … make sure that this university survives the crisis".

This month the University of Melbourne announced it would shed 450 jobs, along with an unidentified number of casual roles, in response to an estimated $1 billion fall in revenue.

The university is also one of several tertiary institutions paying casual academics millions of dollars in back pay.

When announcing the job cuts, Professor Maskell said the university would become a smaller institution due to the pandemic.

If you or anyone you know needs support call Lifeline on 131 114, or Beyond Blue's coronavirus mental wellbeing support service on 1800 512 348.