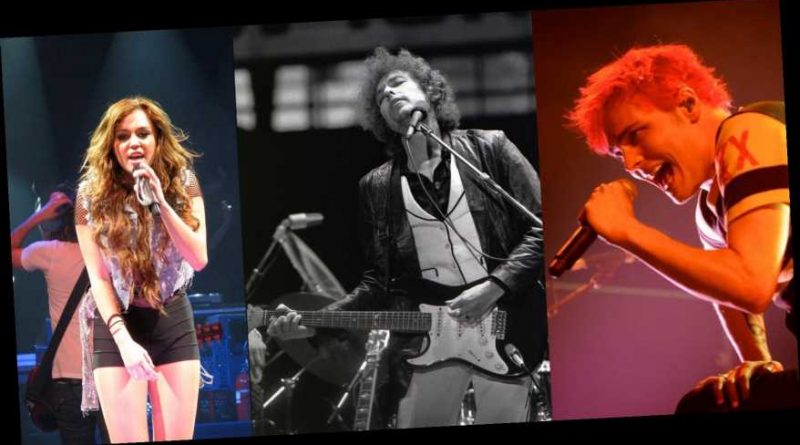 While it may be hard to imagine that in between writing hit songs and releasing platinum records rock stars have time to dedicate themselves any other art forms, but it’s more common than you might expect.

For some, their art serves as a way to relax and unwind, for others it’s a form of expression that makes them happy, and a few even view themselves as visual artists first, musicians second.

Tony Bennett is a tremendously enormous musician – the ninety-four-year-old has sold ten million records in the last ten years alone – but he is also an accomplished painter. Bennett has three works included in the Smithsonian collection, and in 2001 he was commissioned to create a work for the United Nations’ 50th anniversary.

Bennett had an early interest in art, and says he began by drawing with chalk on the sidewalk outside his childhood home in Astoria. Today, he primarily works in watercolor or oil, but he still sometimes enjoys painting outdoors.

Genre-hopping singer-songwriter Miley Cyrus, who just this week joined the ranks of Taylor Swift and Lady Gaga by having an album reach 1 billion streams on Spotify, is also an ambitious visual artist.

“Everything is an art exhibition for me—even just making, like, I feel like my music videos, getting to present those, that’s my way of doing art,” Cyrus explained. “So I feel like my art is in everything I do—I feel like my album is obviously my art, it’s my music, so I’m doing art right now.”

Richard Butler is the front man of new wave band The Psychedelic Furs, a band that was partially responsible for popularizing British post-punk, but Butler actually considers himself a “painter who sings” not a “singer who paints.”

The majority of Butler’s works begin as portraits of his daughter, Maggie, because to him she represents the, “every-man or woman. ” By the time the work is completed however, Butler says his own thoughts and emotions are most represented, making it almost a self-portrait.

Last year, French gallery Galerie Sympa made headlines for inexplicably claiming they were going to the location of Britney Spears’s debut art exhibition – the reality is that the pop star has yet to enter the art world in any formal way.

That doesn’t mean that she doesn’t get joy from painting, however. As the singer captioned her viral 2017 post, “Sometimes you just gotta play!”

Joni Mitchell’s paintings are best known as her album covers, but the beloved singer-songwriter has consistently stated that she is, “a painter first, and a musician second,” and once even stated that, “I have always thought of myself as a painter derailed by circumstances.”

Since Mitchell retired from music in 2006 (after releasing 19 studio albums and winning 10 Grammy awards) she has focused primarily on visual arts.

Gerard Way is a man of many talents. He was the co-founder and lead vocalist of the rock band My Chemical Romance as well as the writer of the comic book series The Umbrella Academy. The comic is now a hit series on Netflix, which Way is also an executive producer of (alongside his comic book co-creator Gabriel Bá.) He is also a skilled visual artist.

Way studied at The School of Visual Arts in Manhattan. While he was in My Chemical Romance, he used his artistic ability to create concept art for their albums. Although Way is clearly busy now with his television career, he regularly posts sketches on his Instagram.

Many have called Bob Dylan the voice of a generation for his work as a lyricist and musician (though he finds that particular reputation annoying) but the Nobel literary laureate is also an artist who has been painting since the 1960s (he began drawing to pass the time during recovery after a motorcycle crash.)

“The idea was to create pictures that would not be misinterpreted or misunderstood by me or anybody else…” Dylan explained of his his exhibition of landscapes in 2016, “My idea was to keep things simple, only deal with what is externally visible. These paintings are up to the moment realism—archaic, most static, but quivering in appearance. They contradict the modern world.”

John Mellencamp is known for singing hits like, “Hurts So Good,” but he is also a successful artist.

According to Mellencamp, the desire to make music and the desire to make visual arts come from the same place: “The need to create,” he says. “I paint or I write songs or make something every day. I’m very fortunate, I live an artist’s life.”

READ NEXT:  7 Hollywood Superstars Who Are Also Artists