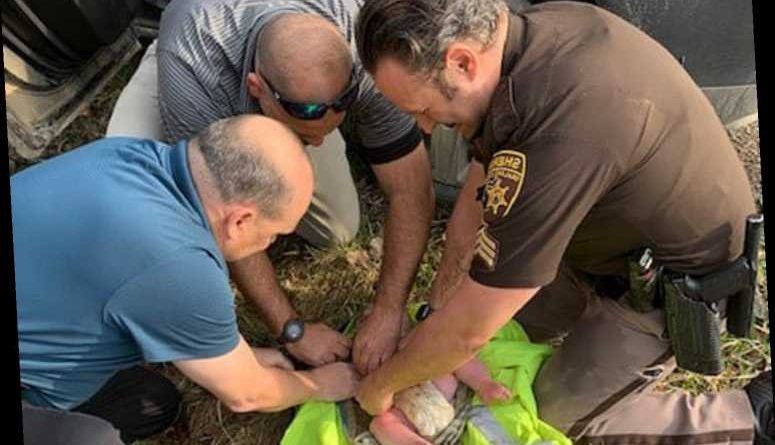 In what Michigan authorities are calling "a miracle," a missing 4-month-old boy is in good condition after he was found cold, wet and alone in the woods.

Deputies from the Oakland County Sheriff's Office located the baby near in an Orion Township wooded area on Wednesday while investigating reports of a distraught woman, according to a press release.

The baby was found in wet clothes laying face down by the bank of a creek, officials said. It was unclear how long he had been left out in the wilderness.

At the time of the rescue, the child appeared to be suffering from hypothermia and first responders quickly wrapped him up in blankets before transporting him to a hospital for treatment.

According to the sheriff's office, authorities were alerted to the missing baby earlier that day after receiving 911 calls from local residents about "a lone woman who was hiding in the bushing and ringing their doorbells."

Though the woman was nowhere to be found when deputies arrived on scene, neighbors told investigators she appeared distraught and was telling people that someone had been chasing her with guns.

Workers at the nearby Waldon Middle School also told deputies that the woman was pounding on the building's locked doors.

When investigators eventually located the woman, they learned that she is the mother of an infant son. Deputies also noticed that the mom had burrs on her pants during their interview, suggesting she may had recently visited a field or wooded area.

Authorities then launched a search for the baby within a one-mile grid between the mother's home and where local residents last reported seeing her.

The search — which involved 13 patrol cars, a K-9 unit, and a drone and aviation team — took 30 minutes before rescuers found the child and stabilized him, officials said.

A spokesperson for the Oakland County Sheriff's Office tells PEOPLE on Friday that the baby's mother, whose identity they are choosing not to release, has been taken to a mental health facility "for a 72-hour mental health commitment."

Prosecutors are currently reviewing the case, according to the spokesperson.

"Thankfully, deputies were able to determine a baby was missing, which triggered an immediate large response and search, and they were able locate the child," Oakland County Sheriff Michael Bouchard said in a statement earlier this week. "Their quick work avoided what could have been an unspeakable tragedy."

Orion Township Supervisor Chris Barnett called the baby boy's rescue "nothing short of a miracle" on his Facebook.

"We are truly blessed to be served by such amazing, attentive and caring first responders," he wrote. "Deputies from Oakland County Sheriff's Office worked quickly and methodically to bring the case to a quick and remarkable resolution. Neighbors gave great and helpful information. Township staff [sprang] into action printing maps and heading to the search area to assist deputies."