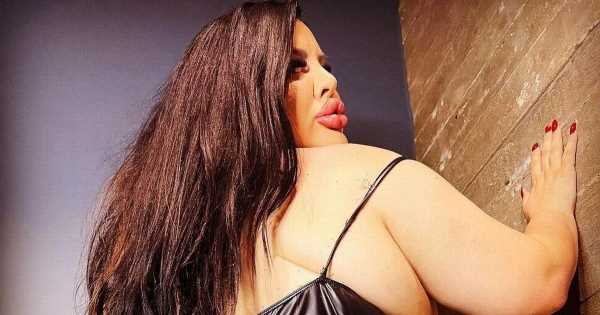 A model is on a mission to get the "world's biggest booty" – and she's gone under the knife multiple times to enhance her curves.

To keep track of her progress, Natasha Crown often posts pictures of her rear online.

And for her latest snap, she flaunted her bum in a pair of skin-tight leather trousers.

The 27-year-old bombshell, from Sweden, styled the figure-hugging bottoms with a latex strappy top.

She kept her long dark hair down and posed up against a wall, showing off her red manicured nails.

Natasha, who has had five butt lifts over the years, turned to one side and pouted towards the camera – sending fans wild.

More than 1,200 of her followers have liked the saucy image on Instagram – and dozens more left positive comments.

Another said: "Bootyful times a trillion."

A third wrote: "My favourite queen."

And a fourth added: "Hot babe."

Despite the gushing comments, some fear Natasha has taken her plastic surgery obsession too far.

Previously, an Instagram user said: “Why are you so obsessed with your a***?

“You do realise that in 10 years time you are gonna so regret this.”

And another asked: “What is wrong with people being happy with the body they have instead of deforming it?”

Despite the criticism, Natasha is unlikely to tone down her look any time soon.

“I did my last Brazilian butt lift one month ago and that was fifth."