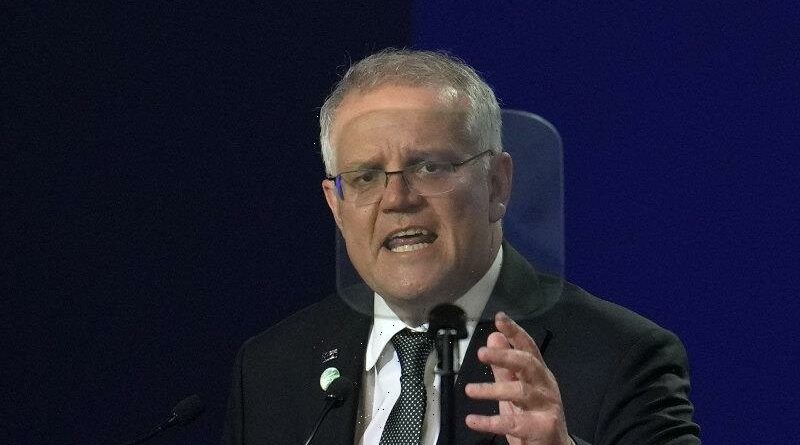 Australia has made a $2 billion pledge to the United Nations climate summit in a promise to do its part to limit the rise in global temperatures, as activist groups call on the country to spend eight times as much to honour its obligations.

Prime Minister Scott Morrison promised the higher spending in a formal statement that also said Australian emissions will fall by 35 per cent by 2030, hardening his language on a goal that he has described as a forecast rather than a target. 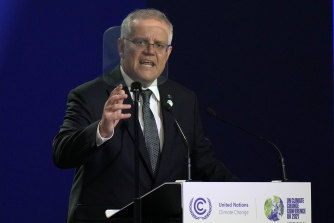 Scott Morrison speaks to the COP26 summit in Glasgow on Monday.Credit:AP

Setting out a “cause for optimism” to the COP26 summit in Glasgow on Monday, the Prime Minister told the peak event for hundreds of world leaders and thousands of delegates that technology would solve the challenge of reducing emissions to net zero levels over time.

The finance pledge was central to Mr Morrison’s national statement to the meeting after he earlier announced $500 million in new spending on aid programs in Asia and the Pacific to make communities more resilient against climate change.

“We have already reduced emissions by more than 20 per cent since 2005. We’re ahead of the pack. Over the same time, our economy has grown by 45 per cent, proving that economic growth is not at odds with emissions reduction.

“And by 2030 our nationally determined contribution here at COP26 notes that our emissions will fall by 35 per cent by 2030, far exceeding our Paris commitment.

“And we are doubling our initial climate finance commitment for our Pacific family and south-east Asian partners to $2 billion.”

The $2 billion is to be spent over five years to 2025 on programs that could help communities prepare for disasters or deal with water and food security challenges linked to climate change.

The pledge is an increase in Australia’s formal commitment to a $US100 billion ($132 billion) annual climate finance scheme for developing countries that was first promised by the world’s wealthier nations at a COP summit in South Africa in 2011.

Activist group Avaaz, which organised protests around the G20 summit last weekend, estimated Australia should commit at least $3.4 billion a year as its share of the annual climate fund.

That is eight times the government’s new pledge, which amounts to $400 million each year.

But there is no formal estimate on the amount each country must contribute as part of the global finance pledge, a problem that has led to years of disagreement about whether rich nations were meeting their obligations.

Australia contributes 1.3 per cent of annual greenhouse gas emissions, according to the World Resources Institute, a non-profit group. A commitment of the same size to the global finance goal would require spending of about $1.7 billion each year.

Indian Prime Minister Narendra Modi highlighted the demands on wealthier countries to spend more money on climate change when he spoke to the summit shortly before Mr Morrison.

That comment also revealed the gulf between developed and developing nations on climate change, with the United States and the European Union calling for faster action to achieve net zero emissions while China sets a net zero target of 2060 and India aims for 2070.

The major developing nations, especially China, India and Russia, have been blamed by some for stalling action on climate change in recent days, but Mr Morrison has not backed that complaint and instead argued on Monday that cutting technology costs was the way to achieve the objective.

“Cleaner technology solutions must outcompete existing technologies if they are to be successful everywhere, especially in developing economies,” he said.

“Raising the cost of the alternative just impacts on those who can least afford it.

“Driving the emergence of low-emissions technologies and fostering their widespread adoption is at the heart of all our plans to reach net zero.