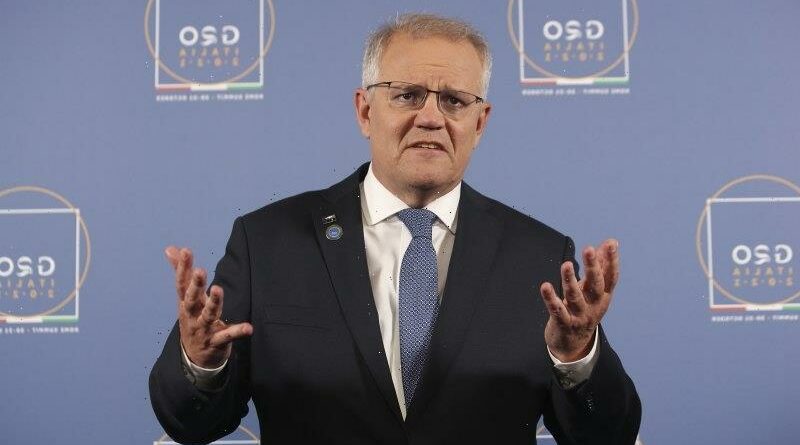 Rome: A split among the world’s biggest economies has thwarted a bid for stronger action on climate change ahead of a United Nations summit on Monday, with Prime Minister Scott Morrison joining others in warning against an outcome that would mandate action by other countries.

Leaders from the 20 largest economies are struggling to agree on concrete measures to reduce greenhouse gas emissions amid deep divisions on whether to phase out coal or set a 2050 deadline for a carbon-neutral economy. 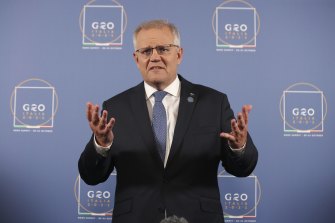 Prime Minister Scott Morrison: “We’re not in the business of telling other countries what they should be doing.”Credit:Alex Ellinghausen

Mr Morrison used his final remarks to the G20 meeting in Rome on the weekend to tell other leaders that technology would provide the answer to climate change in the same way the world was changed by smartphones, silicon chips and COVID-19 vaccines.

“All provide a lesson as to where we must now focus our attention as we address the real challenge of climate change,” he said.

Meeting face-to-face for the first time in two years, many G20 leaders agreed on the need to limit global warming to 1.5 degrees Celsius but could not overcome objections from India, China, Russia and others on tougher targets and actions.

The Prime Minister endorsed the target of net zero emissions by 2050 in the days before he arrived at the G20 summit in Rome but argued against a global pact that set this target for others.

“Australia has made its position very clear but we have always taken the view that we’ll speak for ourselves, we’re not in the business of telling other countries what they should be doing,” he said.

“And other countries have different challenges.”

The setbacks in Rome over the weekend sparked a warning from British Prime Minister Boris Johnson, who will host the climate summit in Glasgow when it begins on Monday, about the risk of ignoring climate change, a force he likened to other dangers in world history.

“You saw that with the decline and fall of the Roman Empire and I’m afraid to say it’s true today,” he said.

With the Glasgow summit now at risk from a weak outcome in Rome, Mr Johnson met Mr Morrison on Saturday in confidential talks that cut short the usual opening statements from the two leaders.

“You saw that with the decline and fall of the Roman Empire and I’m afraid to say it’s true today.”

Mr Morrison’s position on coal is at odds with calls from Mr Johnson, United States President Joe Biden and European Commission President Ursula von der Leyen about reducing the use of fossil fuels as soon as possible.

“Science tells us that it is urgent. We are not yet on track right now,” Ms von der Leyen said.

United Nations Secretary General Antonio Guterres wanted the G20 leaders to make a commitment on coal in Rome, saying wealthy countries should phase out coal-fired power by 2030 and developing nations should aim for 2040.

Mr Morrison rejected this call and said “quite a large group of nations” had similar concerns.

The Prime Minister used his remarks to the G20 on Sunday to argue that advances in technology would have more impact on emissions than taxes or carbon tariffs on trade, saying the solution lay with scientists, technologists, researchers and financiers.

“They’re the same types of people who developed the COVID-19 vaccines,” he told one of the final sessions of the gathering.

“Our Australian way is not about taxes or heavy-handed regulation, but investing heavily in the development of new technologies to achieve the goals that our own modelling shows will move the dial and make a net zero economy achievable – not just in Australia, but in India, Indonesia, Vietnam, Brazil and South Africa,” he said.

While a draft version of the G20 communique suggested a 2050 deadline to achieve net zero emissions, a later version changed this to “mid-century” as leaders such as Indian Prime Minister Narendra Modi pushed back.

The softer target appears more suitable for China, which has a goal of reaching net zero by 2060 and does not expect to start reducing emissions until after 2030. India does not accept it should face the same targets asked of developed economies.

On methane, the communique suggested the G20 would “strive” to reduce methane emissions rather than declaring a target.

On the goal of limiting warming to 1.5 degrees, the summit retreated from earlier calls for “immediate” action and changed this to “meaningful and effective” action, according to draft statements obtained by Reuters.

There appeared to be little progress on $US100 billion in annual finance for climate projects promised by advanced economies more than a decade ago and delivered by some members, such as the European Union, but not by all.

Activist group Avaaz, which organised protests around the G20 summit, estimated Australia should commit at least $3.4 billion a year as its share of the annual climate fund.

Energy Minister Angus Taylor ruled out taking a more ambitious 2030 target to voters at the next election despite calls from environmental groups for Australia to make a bigger commitment at the Glasgow summit.

Mr Taylor also refused to put a cost estimate on the larger task of getting to net zero by 2050, saying the spending would be up to future governments.

The government says it will spend $20 billion over the next decade on its technology investment roadmap, suggesting it might have to continue spending $2 billion each year over the long-term.

“That run rate of the money we are spending over the next decade is what we would expect into the future,” Mr Taylor said, but when asked whether this meant $20 billion each decade until 2050 he said “no”.

“Well, only if you have a proper plan to get medium term reductions can you leave the heavy lifting to future governments,” Mr Bowen said.

“Angus Taylor’s plan is to do not very much by 2030 and leave it to future governments to do the rest.”