A mother who hasn’t used any cosmetics including shampoo on herself or her children for over a year claims that the change has saved her thousands.

Last year, Virginia Tapscott made the controversial decision to stop using toileteries on both herself and her kids after becoming concerned about the amount of ‘toxic’ chemicals in mainstream beauty products.

And the freelance writer even cut down using soap and completely stopped washing her three-year-old son Oscar’s hair – while her daughter Elke, one, has never been exposed to any products other than water and oil. 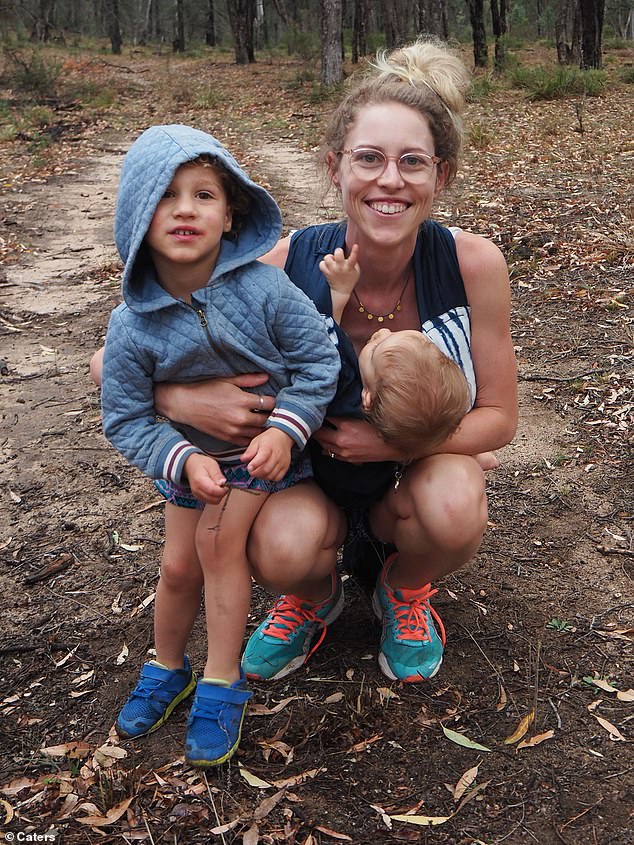 Mother-of-two, Virginia, said: ‘When I was pregnant with my daughter, I started to really think about what toxic chemicals are in all the beauty and household products that I was using every day.

‘The chemicals are not just terrible for our health, but they have a huge impact on our overall environment footprint.

‘I also wanted to stop the amount of waste and plastic that was going straight to landfill. So it all made sense to me.

‘I decided to cut out washing my hair with shampoo and conditioner, while also stop using soap on my body in the shower. 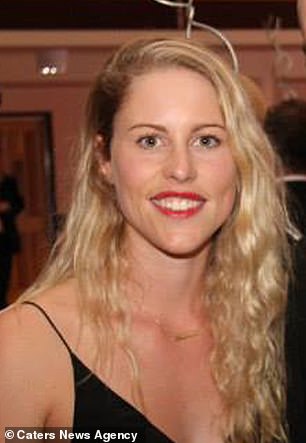 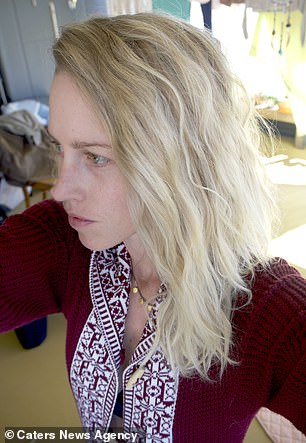 She says that she has saved £3,500AUD by giving up her beauty products as well as shampoo, and says that her hair has never felt better. Pictured: Before (left) and after ditching shampoo 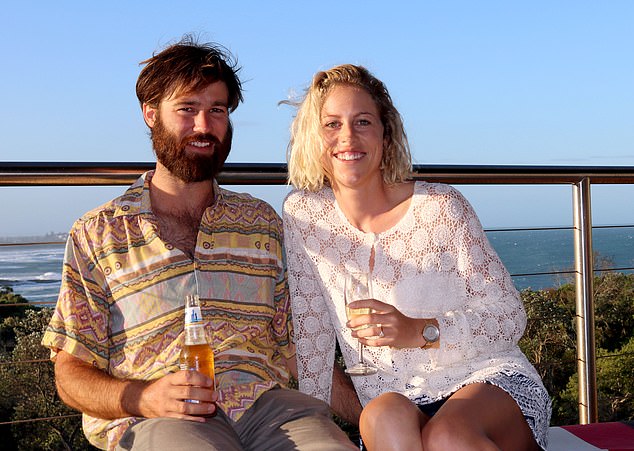 ‘I didn’t know what would happen but wanted to give it a go. Now I just use warm water and a washcloth, and it makes for a really quick shower.

‘Our skin produces all these natural oils that keep it clean and healthy anyway.

‘Water is a powerful solvent in itself so that is going to get off any dirt or grime, especially when you use a washcloth.

‘As for my hair, it’s never felt better. It does feel different and its obviously not like it was when I was washing it, but it doesn’t smell.

‘It’s far less knotty than it was. The natural oils make it easier to brush. I will scrub it with bicarb soda if it feels oily, but that is very rare. 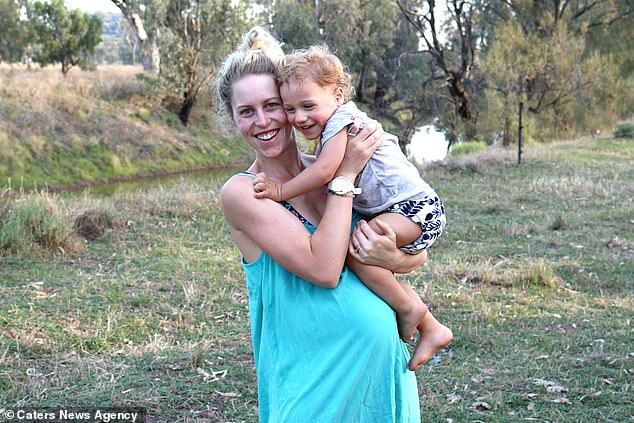 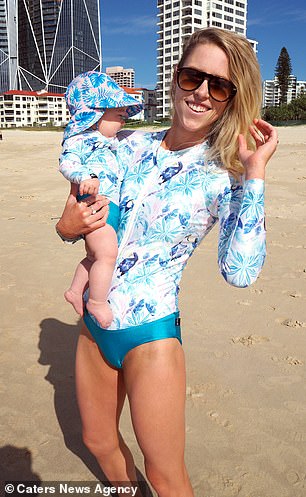 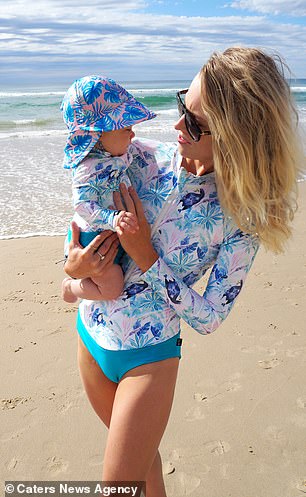 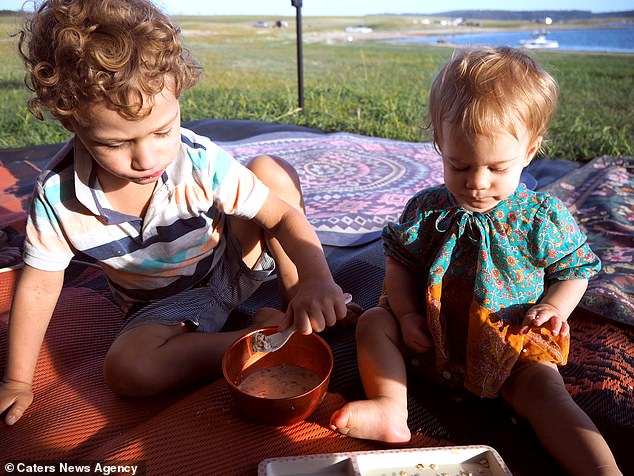 ‘I also sometimes just rub tapioca flour in my hair and brush it out, which is like a natural dry shampoo.

‘My skin has also never looked better. It used to be on the dry side but now it feels amazing.’

Now the only products Virginia uses on her skin is pure jojoba oil and a mineral sunscreen, which only costs her $160 (£90) per year.

The mother still uses a bar of hand soap for hygiene, but has ditched commercial deodorant and toothpaste altogether – saving her a further $200 (£113) in the last 12 months.

She now makes her own toothpaste from bentonite clay and calcium carbonate – while her homemade deodorant is simply coconut oil, bicarb soda and essential oils.

Virginia said she used to be addicted to bleaching her hair and applying fake tan to achieve that year-round glow – and added those were the hardest things to give up. 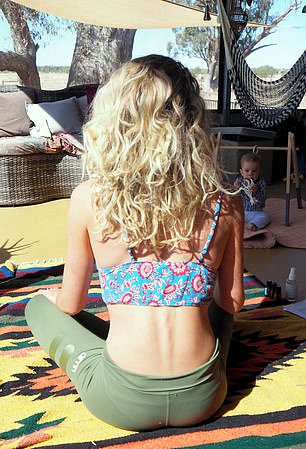 Virginia’s hair seen from the back a year after shampooing

But after ditching home hair dye, monthly salon appointments and giving up the fake tan, it has saved her a whopping $2,000 (£1,120) a year.

Virginia said: ‘Hair dye and fake tan were the most difficult things to give up. I loved getting my hair coloured.

‘But in the end I couldn’t do it anymore. I couldn’t justify all the bleach going down the drain and polluting the waterways, and it was also is was irritating my skin.

‘I know it’s nice to do nice things for yourself as a woman, but there is freedom in not dying your hair for a year and realising that this is actually what my hair looks like.

‘I don’t feel like I’m missing out on anything. I feel better than I ever have.

‘A minimal approach can save you thousands of dollars.

‘It’s not ridiculous and it doesn’t mean that you have less personal hygiene, it’s just cutting out less.

‘It’s a huge misconception that we smell bad, because we honestly don’t at all.’

Virginia – who is married to electrician husband Paul, 32 – said her children have only benefited from the minimisation of mainstream beauty products.

Virginia hopes that her daughter Elke will grow up without feeling the usual pressures placed on females to conform to a certain standard of beauty. 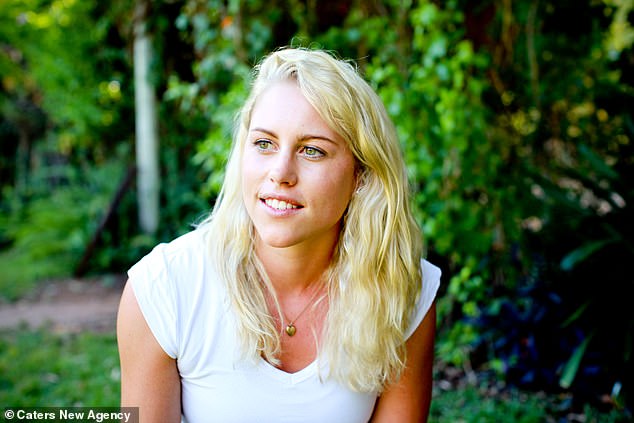 She added that by being a role model for her daughter, it may help curb issues like low self-esteem and poor body image.

Virginia said: ‘My daughter has never been exposed to soap or shampoo.

‘She has had nothing on her skin except oil since she was born it has made a world of difference.

‘I give her a good wash in the tub and sometimes I’ll put some oil in there.

‘My son doesn’t get rashes anymore, and people tell me all the time how beautiful his curls are

‘I think by doing this it will also help my daughter develop good self-esteem and a positive body image.

‘What is even better than saving money is that we’ve stopped so many chemicals from going into both our bodies and the environment.

‘It was the best decision I’ve ever made.’