A woman who began learning to sew three years ago has saved an estimated £800 by making clothes for her family from recycled materials.

Becky Lawrence, 32, from Shirley, South East London, who used YouTube tutorials to master stitching after inheriting sewing materials from her mother-in-law, revealed she no longer needs to buy new clothes.

The mother-of-two estimates she has saved at least £500 on herself and £300 on her kids to date by transforming curtains, duvet covers and unloved charity shop garments into fancy new outfits. 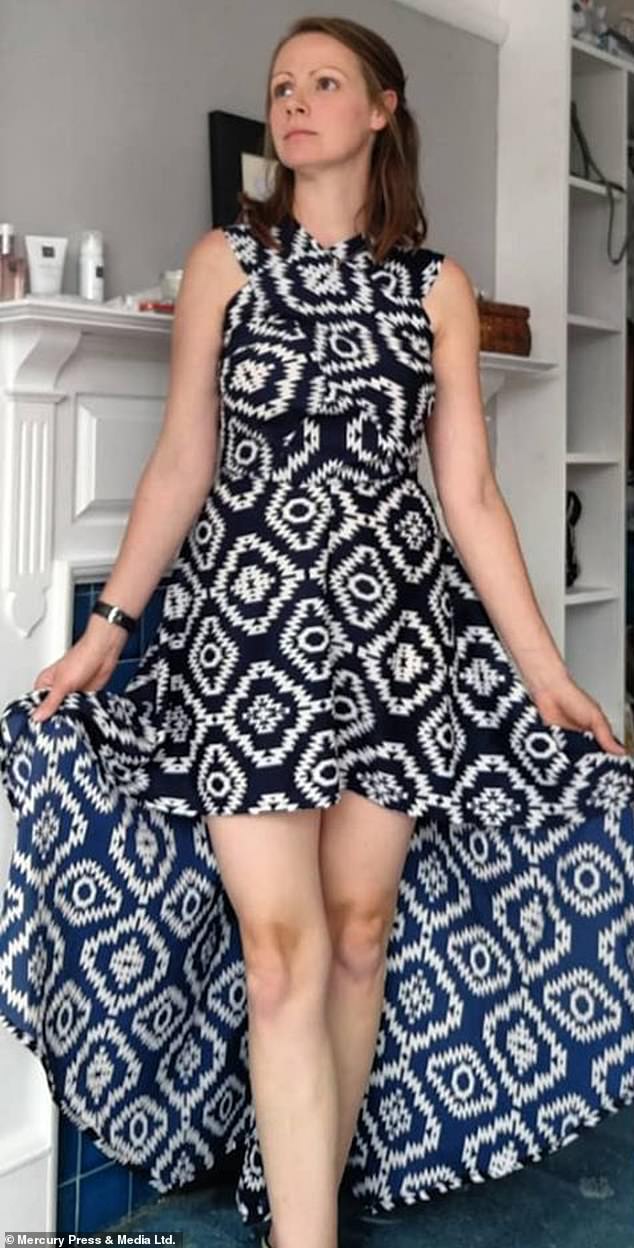 Becky Lawrence (pictured in a dress she made out of an old kimono), 32, from Shirley, South East London, has saved an estimated £800 by making clothes for she and her family 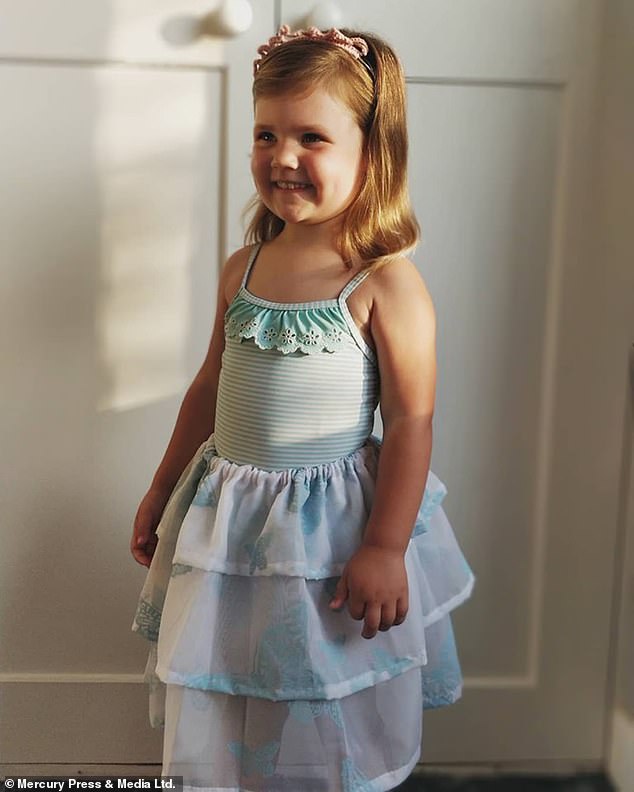 The mother-of-two used YouTube tutorials to learn how to sew. Pictured her daughter Isla, three, wearing a dress made from a curtain

The playgroup manager has turned everything from cushion covers to oversized t-shirts into wearable styles for herself and children Ezra, five, and Isla, three.

She said: ‘My mother in law passed away three years ago, she made quilts. She made one for me, my husband and son.

‘My daughter had only just been born, so hers was half finished. I wanted to learn so I could finish it off, but I haven’t touched it yet because I’m too nervous.

‘I inherited lots of resources from her, apart from my sewing machine, which is how I got started.

‘I had one two-hour lesson on how to make a cushion cover, and then just used YouTube.

‘I didn’t realise it was something I could do, and I really enjoy doing it.

‘I don’t stop moving all day and I would normally crash out on the settee but I’m happy to sit and sew. 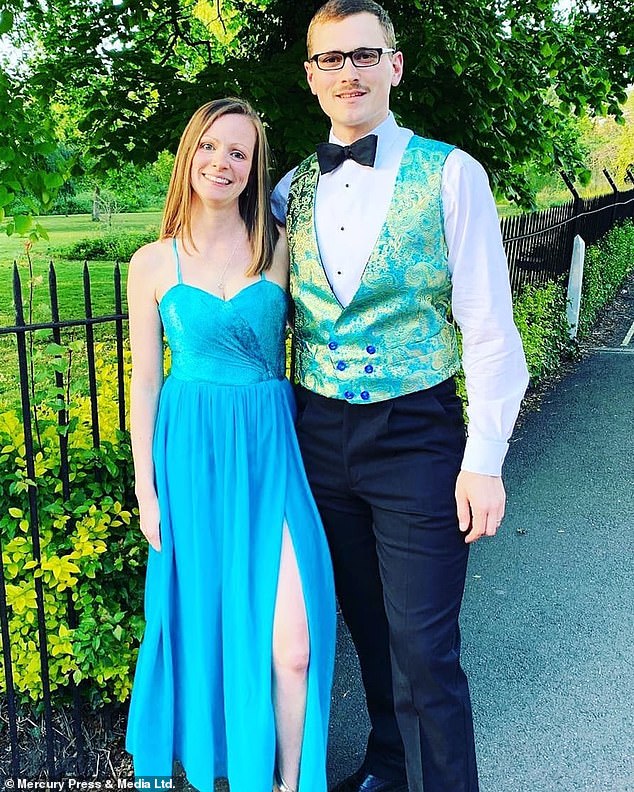 Becky, pictured with her husband Tom, wearing a dress she made out of two separate frocks. She became interested in making her own clothes after inheriting sewing materials from her mother-in-law. 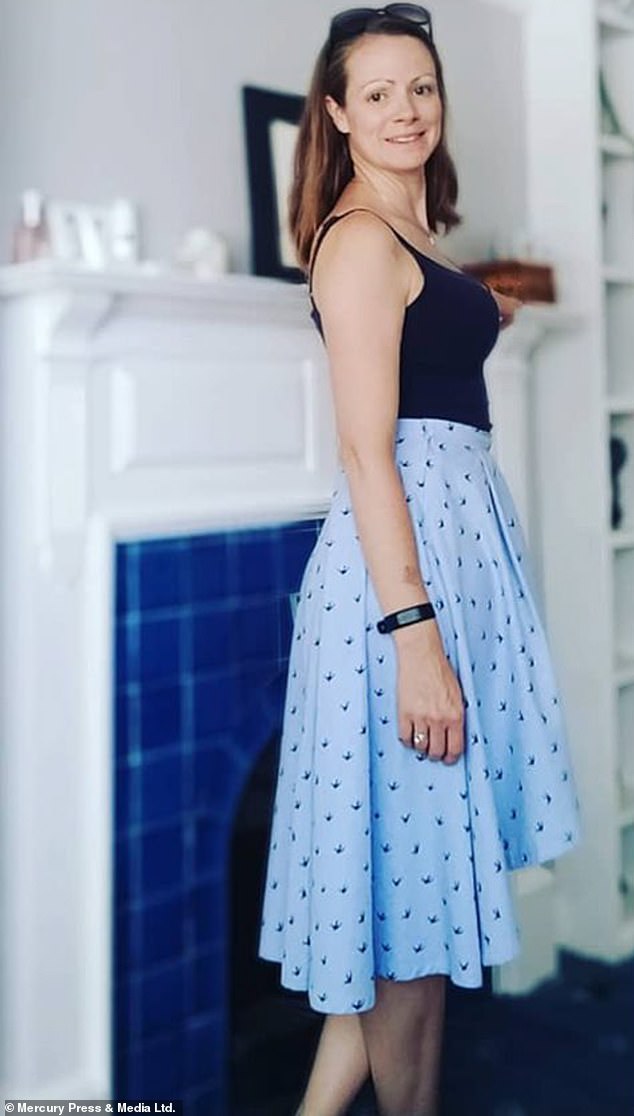 Becky hopes to turn her sewing hobby into a business that encourages others to recycle, pictured her daughter Isla, three, wearing a faxu fur gilet that she made

‘It never gets boring, it’s really exciting and the money saving aspect is really just an added bonus to what I do.

‘For me the transformations are about taking something that is unloved and over looked, or not quite right for the person, and turning it into a garment that is perfect and unique for someone.’

Becky who doesn’t need to buy clothes for her children anymore, admits her financial director husband, Tom, 31, has remained picky over the clothes he wears.

The mother-of-two has transformed cushion covers into gilets, shower curtains into skirts and two ball gowns totalling £15 into one dress.

She continued: ‘I don’t buy clothes apart from school uniforms. I’m constantly picking things apart with my eyes. When I’m out shopping, I think ‘I can make that myself’.

‘I save so much money. I made a ball gown with materials that cost £15, if I bought one I would have spent over £100.

‘I have a go at most things. I love transforming into something completely different. I love the fact I can make clothing into what I want it to be.

‘I love that aspect. If I’m going to an event I’ll go round charity shops looking for a certain colour or fabric that I like.

‘Some things I make are epic fails, not everything goes to plan but you learn from it.’

Becky hopes to turn her hobby into a business that encourages others to recycle their clothes once her youngest child starts school.

She believes that the old fashioned make do and mend attitude of refashioning old garments should be adopted by more people to help save the planet.

An old grey cardigan that Becky was keen to upcycle (left).  The creative mother-of-two managed to transform the item into a dress

Becky admits not all outfits go to plan but she’s able to learn through experience. Pictured: A baggy pink jumper before she transformed it (left).  Becky was able to give the garment new life by turning it into a zip-up cardigan (right)

She added: ‘In the last five years, Tom and I have been trying to look after our planet a bit more, recycling and producing less waste.

‘My eyes have been opened to how much waste there is and small changes make a big difference.

‘After one wash, clothes shrink a bit because they have been made as a bulk, they’re worn a couple of times and thrown in the bin, they aren’t even taken to the charity shop. 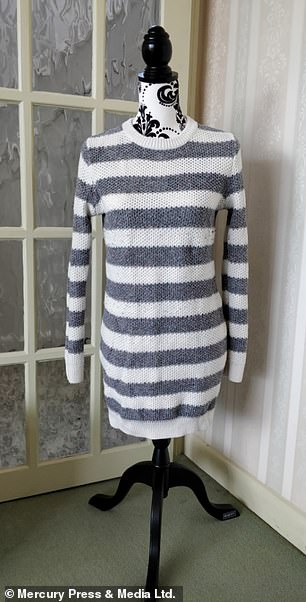 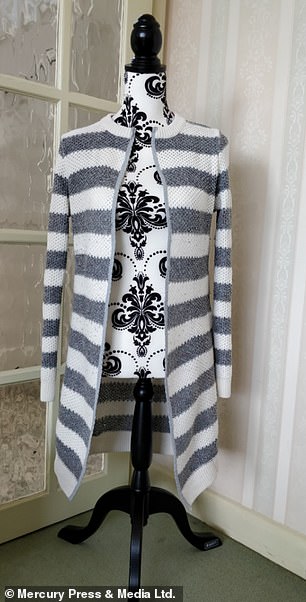 A baggy striped jumper before it was transformed by the mother-of-two (left). Becky cleverly turned the old jumper into a smart jacket 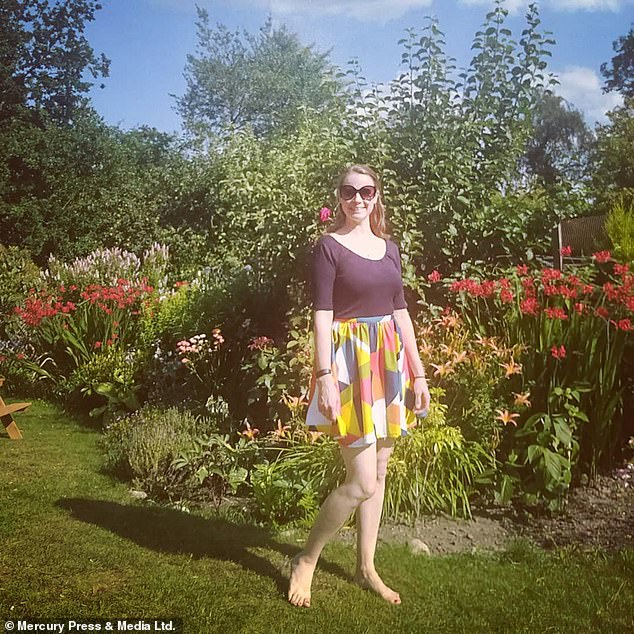