A grieving mother has shared a touching photograph showing her premature baby giving her dying twin sister a ‘goodbye hug’ – taken as they were held together for the first time.

In the picture, Amy Campbell’s baby daughter Charlotte is seen wrapping her arm around her tiny twin Esme, just days before she died.

Amy, 30, from Leeds, explained how her twins had been born severely premature at 26 weeks, weighing just 2lbs each.

Just before the photograph of her two daughters was taken, doctors had given Amy and her husband Conor the devastating news Esme had an extreme amount of fluid on her brain and would likely not survive.

The couple were then forced to make the heartbreaking decision to turn off Esme’s life support. 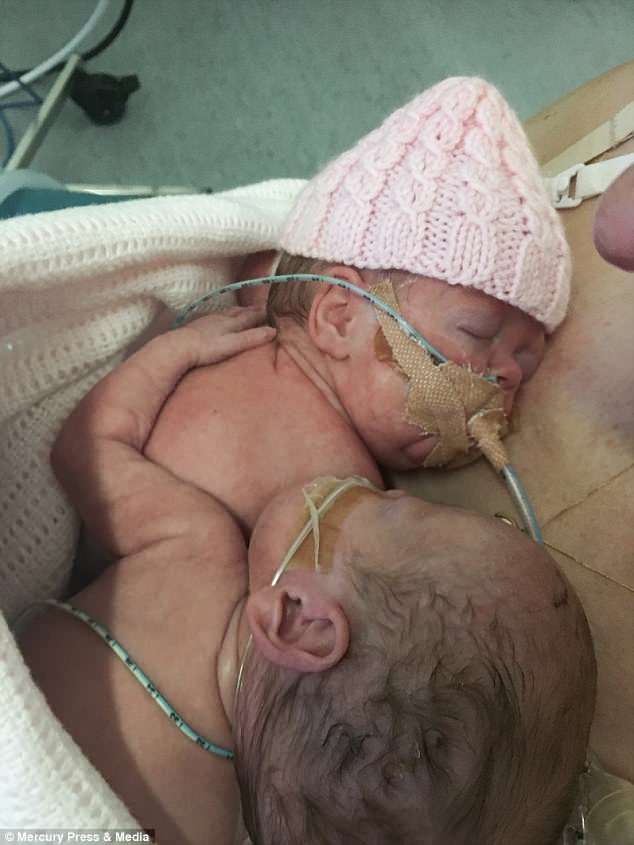 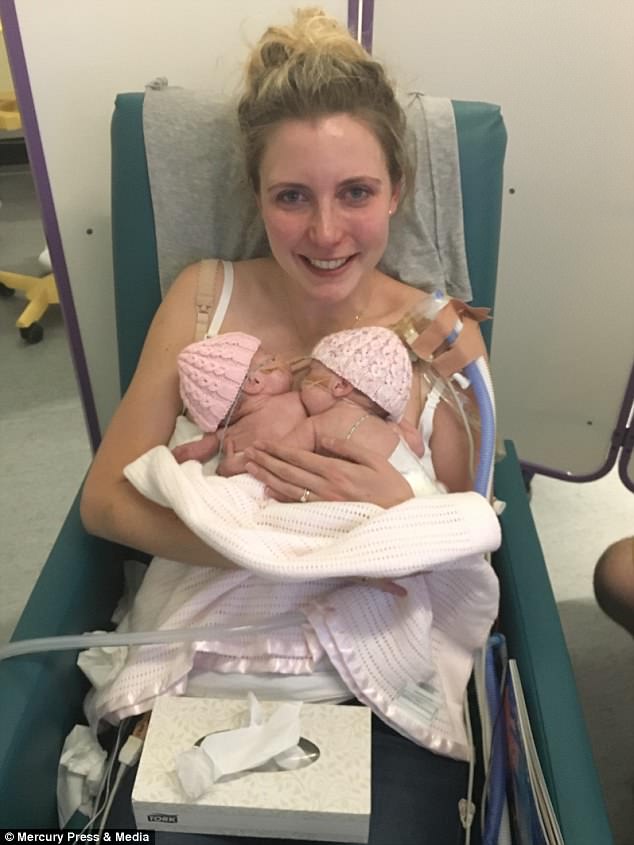 Amy, from Leeds, said she wanted her daughters to ‘meet’ before Esme passed away

Amy, who is now pregnant with a baby boy, explained how she and Conor had wanted their daughters to ‘meet’ before Esme passed away in August 2016, asking nurses to help them hold the girls at the same time.

As nurses lay the twins on their mum’s chest, Charlotte placed her arm around her sister’s shoulders – a precious memory Amy said ‘felt so right’.

Explaining how she found out the devastating news that Esme would likely not survive, the stay-at-home mother said: ‘Esme had had a really bad infection but on the Friday we got told that her infection markers had come right down and we thought she was fighting back.

‘Then on Saturday I was out walking the dog and I got a phone call from the hospital. They never called unless there was an emergency so I knew something was really wrong. 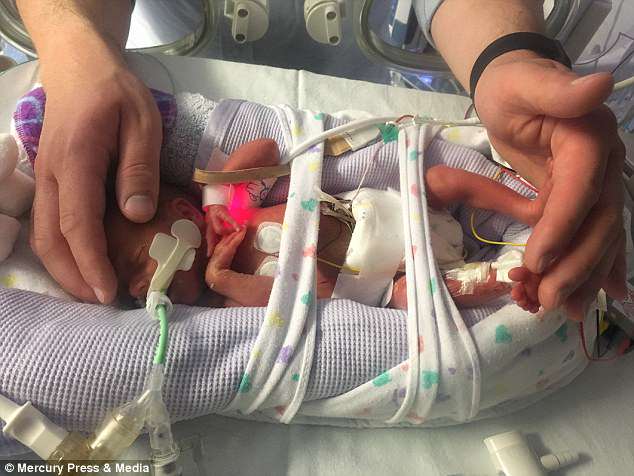 Esme, pictured in her incubator, was born at just 26 weeks, weighing just 2lbs 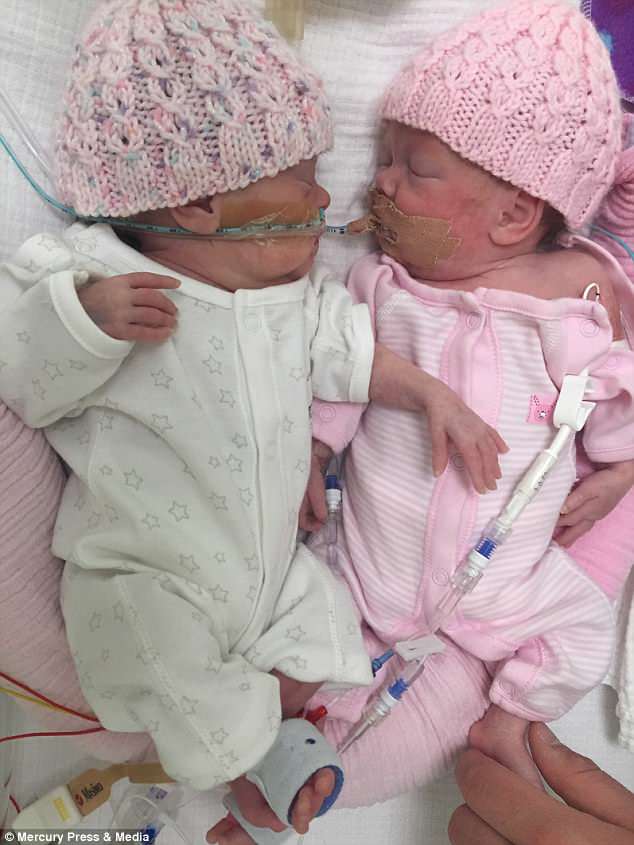 ‘They told me they thought we should come into the hospital, I just knew they were going to tell us that Esme was dying. I collapsed in the field and a man from the village had to come and get me to my feet.

‘I called Conor and we drove to the hospital, it was such a horrible drive. The whole time I knew I was on the way to face hearing that Esme was too poorly.

‘The doctors told us that more fluid had gone into her ventricles in her brain and her head circumference had increased so much that even if she were to survive she would have absolutely no quality of life.’

Amy explained how she and husband Connor were faced with the decision that no parent wants to face. 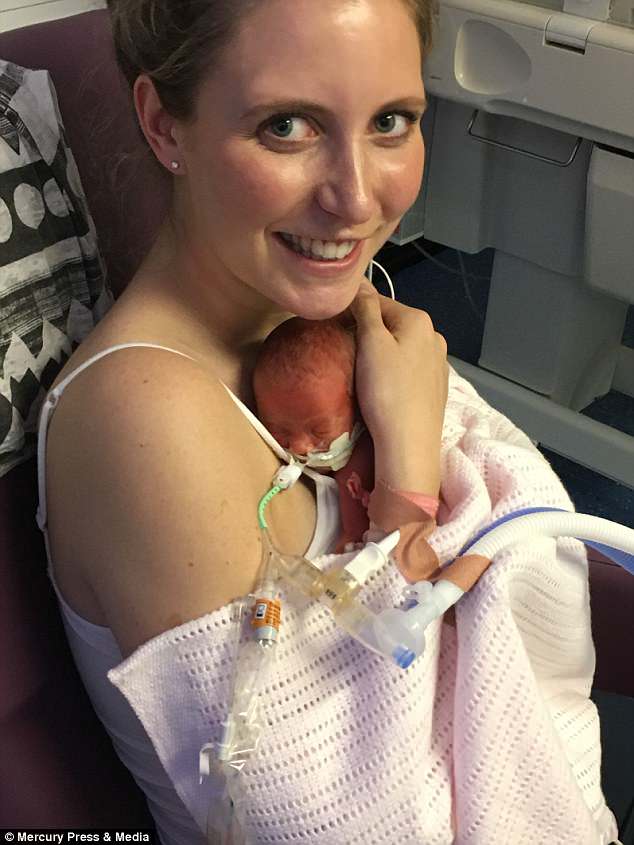 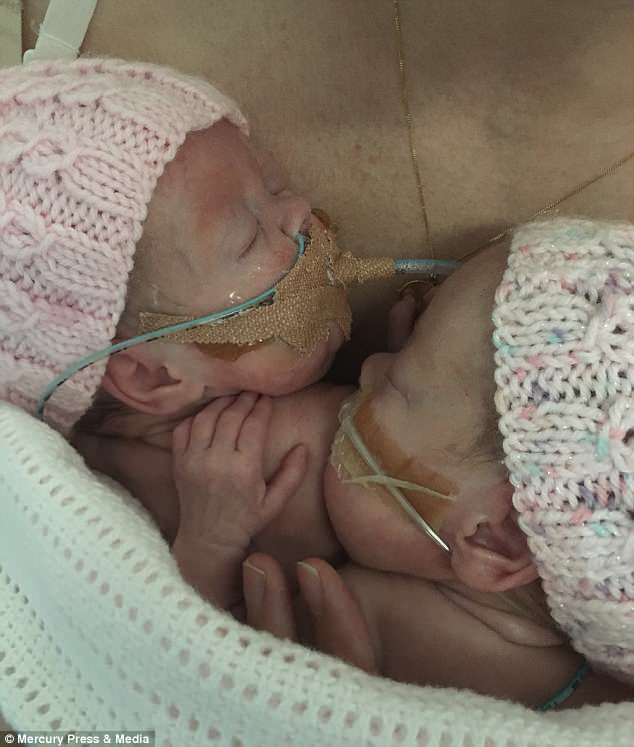 ‘We knew we didn’t want Esme to suffer but how do you decide when to switch off your baby’s life support? It was a massive decision,’ she said.

‘How will you know when to end your child’s life? All I did know was that before she died I wanted them to meet one another.

‘Conor and I had never been able to hold them both at the same time so the nurses arranged to help us out. They were really brilliant the whole way through.’

Describing the special moment that Charlotte embraced her tiny sister, she said:  ‘The nurses placed them on my chest and Charlotte put her arm around Esme and I thought “they love each other”. 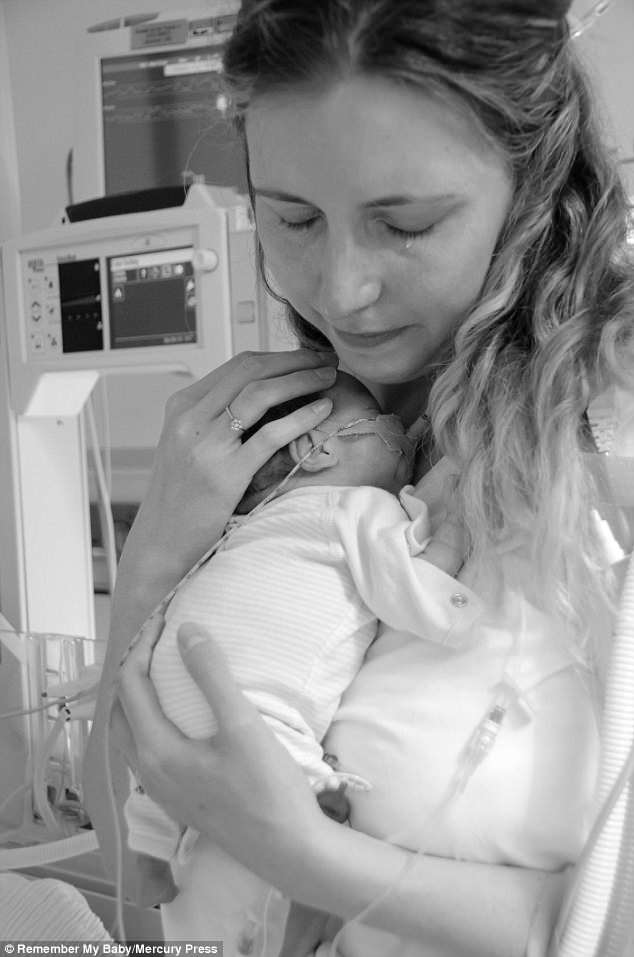 Esme, pictured on her last day before her life support was switched off, had been suffering with a bad infection before doctors discovered the fluid on her brain

‘It was probably Charlotte just getting comfortable but it would be beautiful to think she was giving her sister a big cuddle. She is such a caring girl that maybe she was hugging her.

‘That moment of having them both snuggled up in my arms was the best moment of my life. Despite the devastation of what we had just been told, in that moment everything felt so right.’

After a late evening spent holding their girls, Amy and Conor arranged a christening for Charlotte and Esme on the ward at Leeds General Infirmary on Sunday August 28, 2016.

Still distraught at the thought of having to decide when to turn off her baby’s life support, Amy spent that night sat by Esme’s incubator chatting to her ‘shining star’, her ‘tiny dancer’ – and writing about her baby. 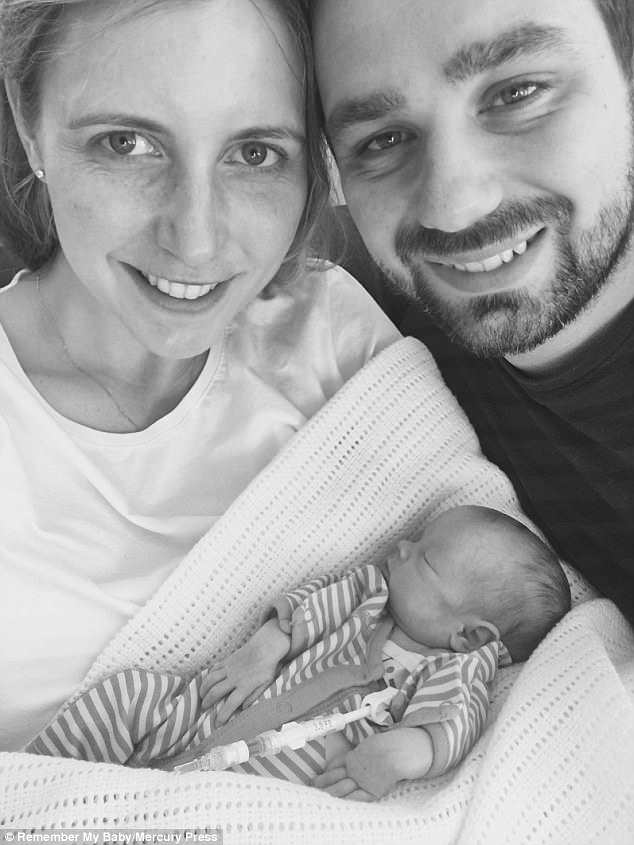 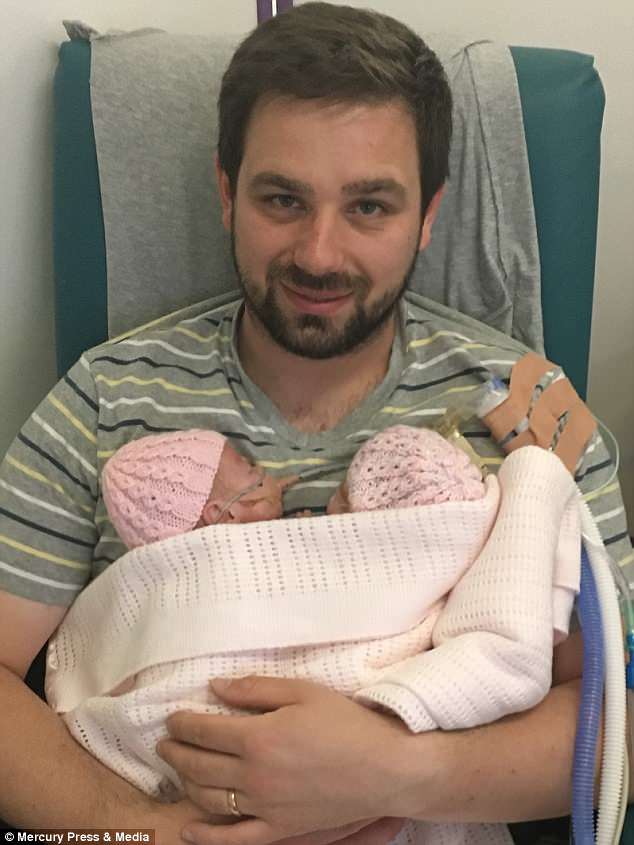 The parents knew the next day it was the right time to put an end to their daughter’s suffering and Amy and Conor held their brave daughter for 12 hours after her life support was turned off until she died in her mother’s arms.

Esme was buried in Charlotte’s christening outfit on September 13, 2016 and Amy planned a celebration of her life in a hall decked out with bunting and photos of their last day together taken by the charity Remember My Baby.

Amy said: ‘The christening was beautiful, all our family and close friends were there.

‘The church was so full that people were having to stand at the back. It felt very special. It made us feel very loved – and that Esme was very loved. 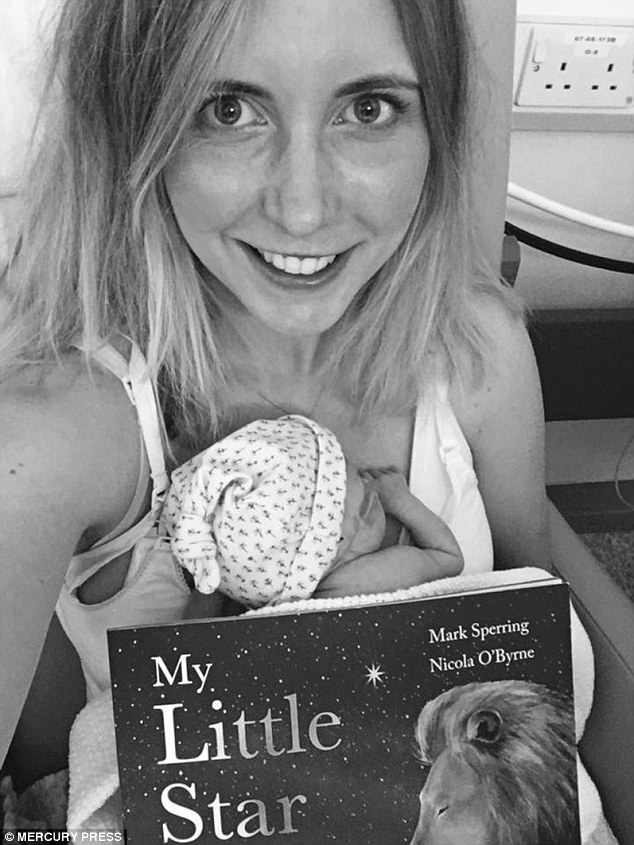 Amy, pictured with Esme, reading a book to her baby daughter, who was born severely premature 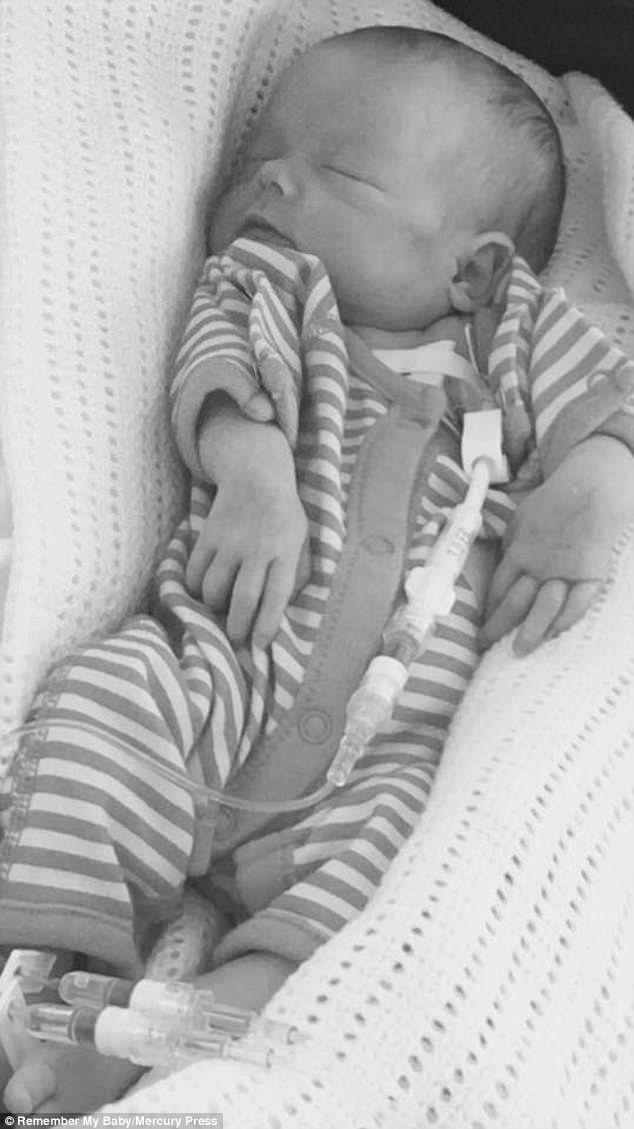 ‘We were going to switch off Esme’s life support after the christening but we couldn’t do it. It was such a lovely day and we didn’t want to remember saying goodbye to her on her christening day.

‘We decided to wait until the next day. By this point she was having really regular seizures and we knew that there was no benefit to prolonging her suffering.’

She continued: ‘That night I couldn’t sleep so I went down to see Esme. I sat by her incubator and asked the nurse for a pen and paper. 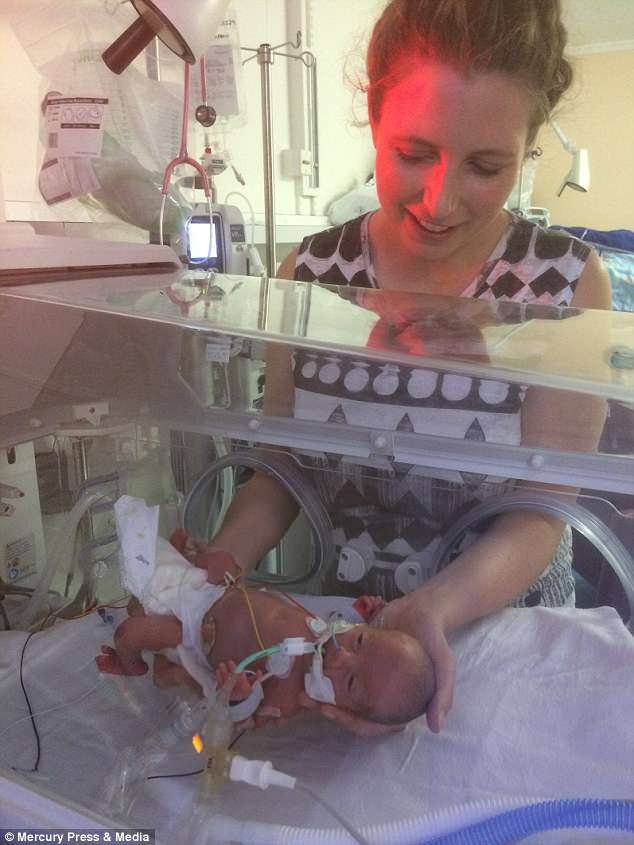 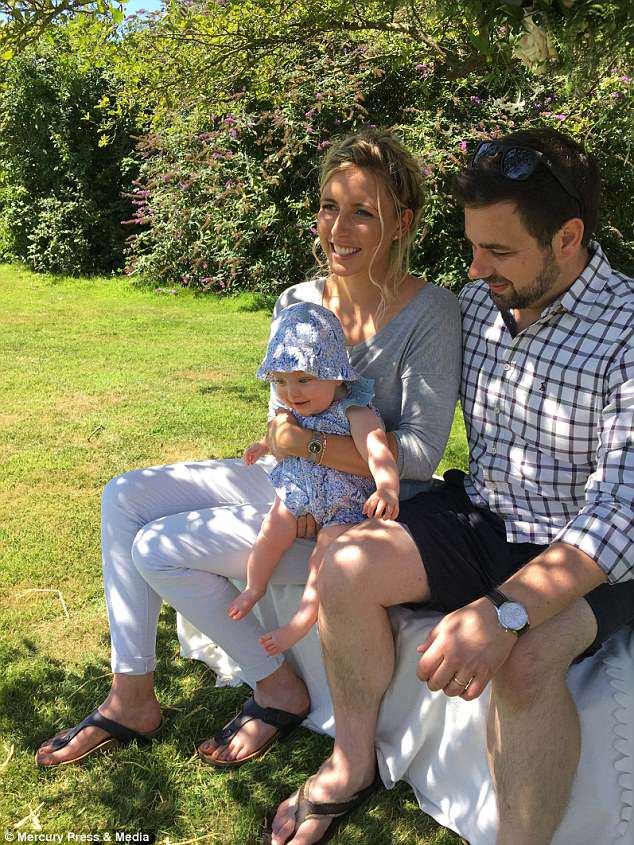 Charlotte, now 22 months, came home with her mum and dad on the twins’ due date

‘I just started to write about her. We always said she would be a dancer or love yoga because she was so relaxed and her little feet were always on the go.

‘After each thing I wrote I would chat to her and ask her ‘come on Esme, what should we write next?’

‘It felt so good to write it all down and capture everything special about her. It also felt like such nice time to have with just the two of us.

‘The next day Conor and I knew we were ready, Conor carried her down to the family room. It is so hard to think about that moment but I knew I had to do it, I had to do it for Esme. 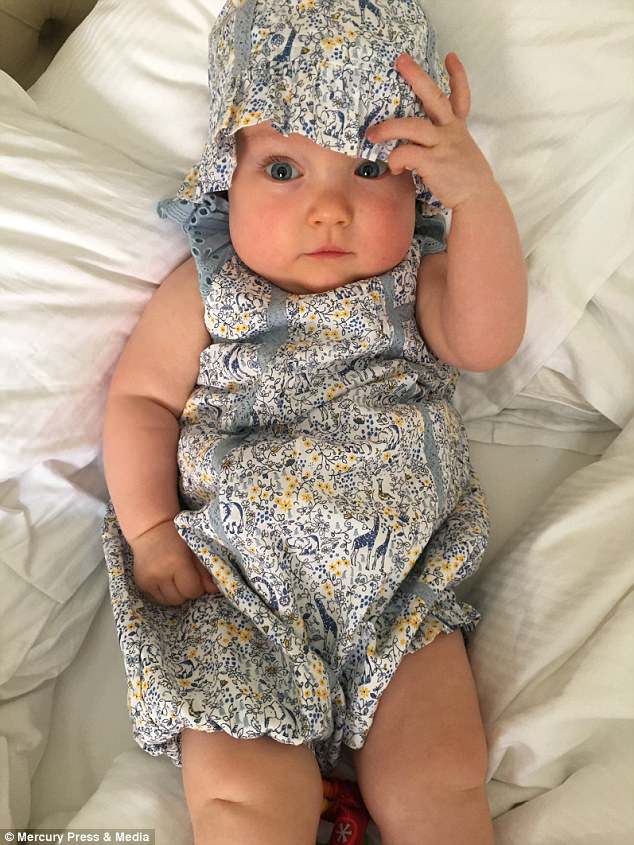 Baby Charlotte has been thriving ever since returning home from hospital, despite being born premature

‘She stayed with us for 12 hours after the life support was turned off. It’s like she needed it to be on her terms, she would decide when she was going to go.

‘I was holding her when she took her last breath. When she died and we realised she wasn’t coming back it was so heartbreaking.

‘But I tried not cry because I wanted her to be surrounded by happiness and love and strength. I wanted her to remember that she had a strong mum and she shouldn’t be scared of where she was going next.

‘I called the piece of writing I did with Esme “My Bright Shining Star” because that is what she had always been since finding out that we were going to have to say goodbye to her. 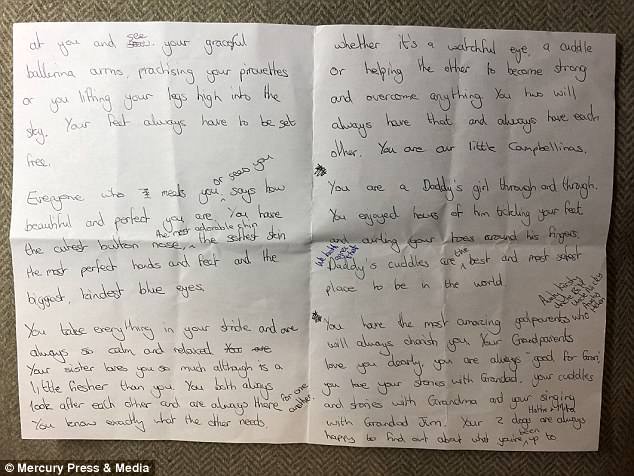 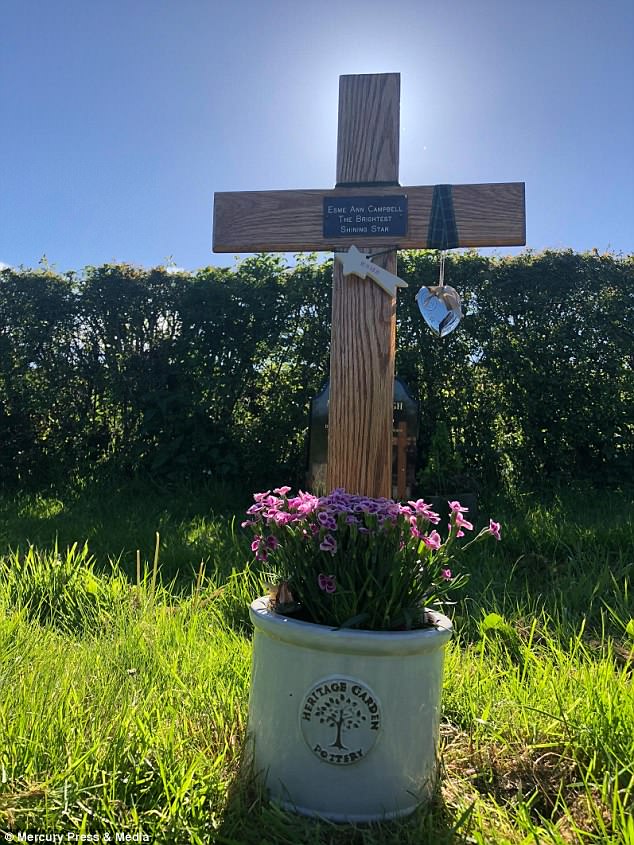 ‘And that night when Conor and I got home this shooting star went across the sky and we knew it was her.

‘I think she wanted us to know that she was happy and loved and it made us understand that we really had done the right thing. It was truly beautiful.’

Conor and Amy, who met 12 years ago on the rowing team at Northumbria University, were over the moon when they found out they were expecting a baby in February 2016.

And at 11 weeks after suffering a bleed, an ultrasound revealed that Amy was expecting twins – much to the couple’s shock and delight. At 24 weeks and three days pregnant Amy was rushed to hospital again as she had gone into early labour and her waters for Charlotte had broken.

The non-identical twins had separate placentas and amniotic sacs but over the next 17 days, while mum remained on bed rest in Leeds General Infirmary, Esme shared her waters with her sister.

Charlotte, now 22 months, came home with her mum and dad on the twins’ due date of October 10, 2016 and has been thriving ever since.

Amy feels that the girls have had a magical bond since before they were born and that Esme will always be there for Charlotte in that special twin way. 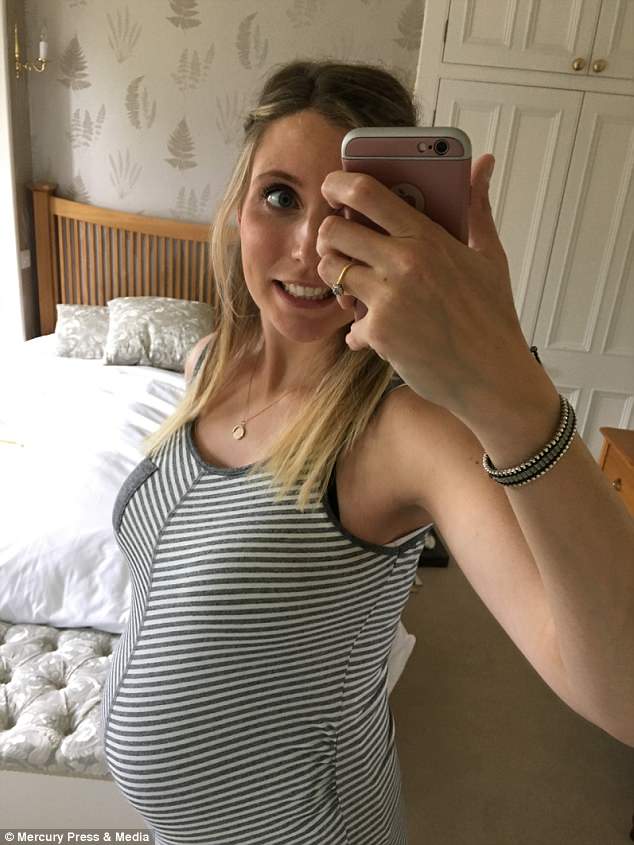 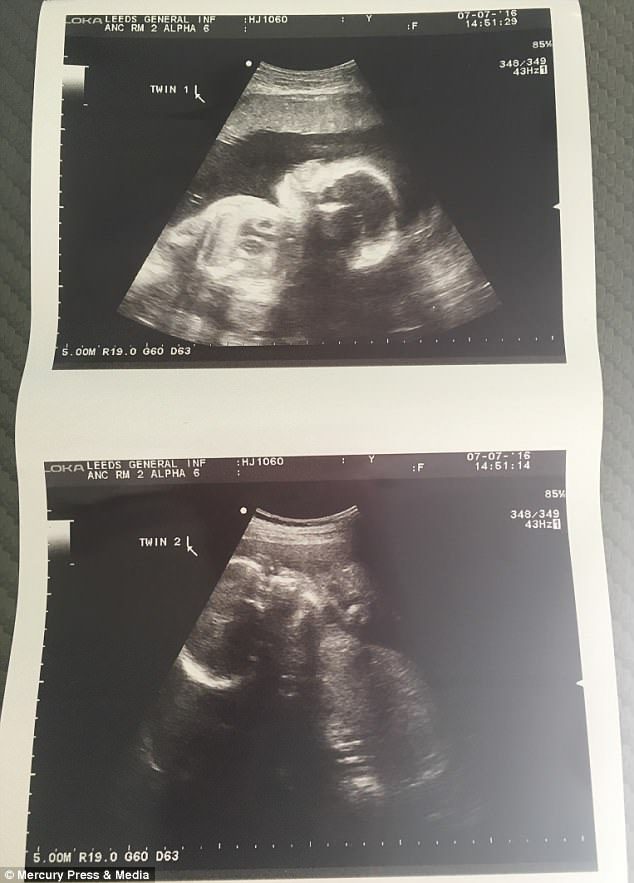 Amy said: ‘When Charlotte lost her waters I was terrified and not sure what was going to happen next but they managed to hold on for another 17 days.

‘When the nurse told us that Esme was sharing her waters with her sister, it was incredible to know the girls were working together. I felt very proud of them.

‘After they were born Charlotte was so poorly. They really struggled to intubate her and we were told that each hour was crucial.

‘Esme was always the stronger one but at about six weeks our week of hell started. They found out she had fluid in her ventricles and no matter how hard she fought it kept getting worse. 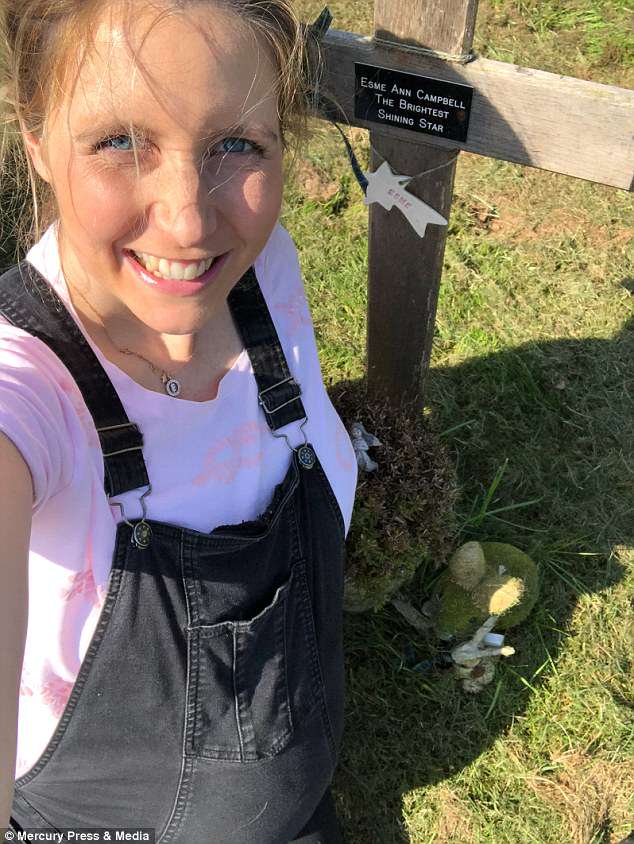 Amy, who is now pregnant with a baby son, and husband Conor have now set up a non-profit organisation in memory of Esme 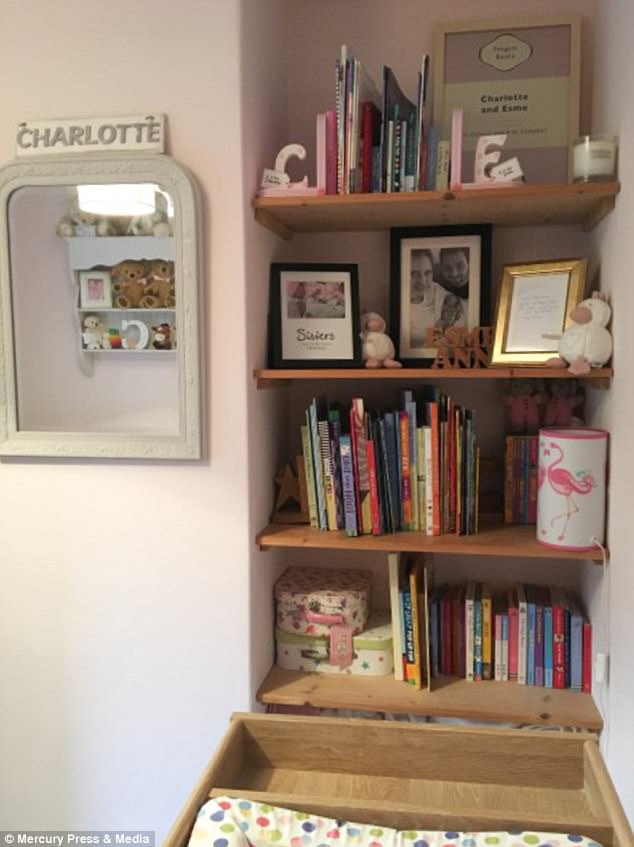 ‘In her short life she taught us nothing but courage and bravery. She taught us what love means in its purest form and the best ways to live our lives. I think she has always looked out for her sister.

‘Charlotte and her baby brother will always know about their sister Esme. We keep reminders of her all around our home to allow it to happen naturally.’

Since losing Esme, Conor and Amy have set up a non-profit organisation in her memory called Campbellinas – their nickname for the twins.

The couple have raise more than £10,000 so far as a way of giving something back and saying ‘thank you’ for all the support they received from the Leeds hospital.

Amy has also set up a blog called This Is My Brave Face to help other families coping with the loss of a child.