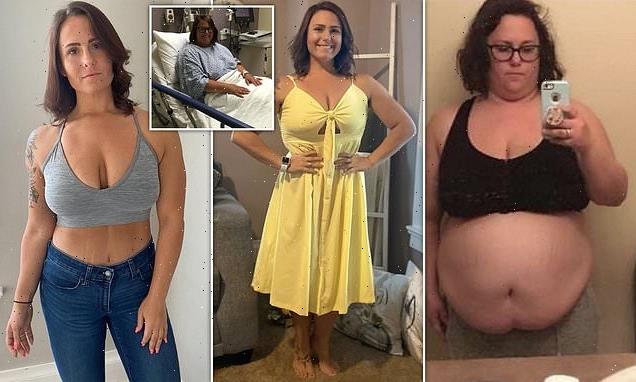 Mother who spent almost $1,000 a month on fast food and would get winded trying to roll over in bed at 252lbs loses more than 100lbs thanks to gastric bypass surgery

A mother who spent around $1000 on fast food a month has shed nearly 100lbs after gastric bypass surgery.

Lauren Nagle, 32, from Canton, Ohio, was trapped in a vicious cycle of binge eating,  visiting up to four different fast-food restaurants a day and tipping the scales at 252lbs as a size 26.

The mother-of-three said she was ‘miserable’ struggling to use the rest room and getting winded when she would roll over in bed due to her size, and in July 2018 decided ‘enough was enough’.

She has since lost over 100lbs, dropped 11 dress sizes and claims she’s often complimented on her new ‘youthful’ appearance, with some even remarking that she’s ‘aged backwards’. 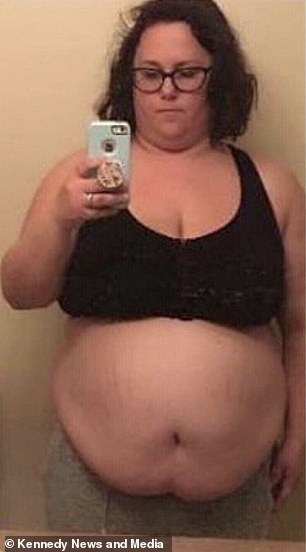 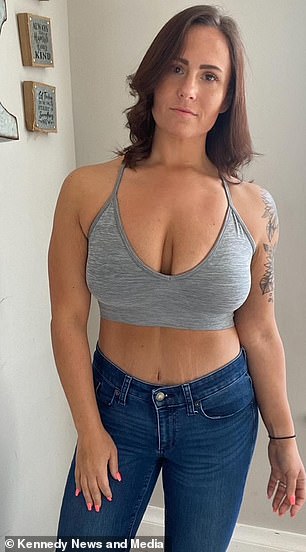 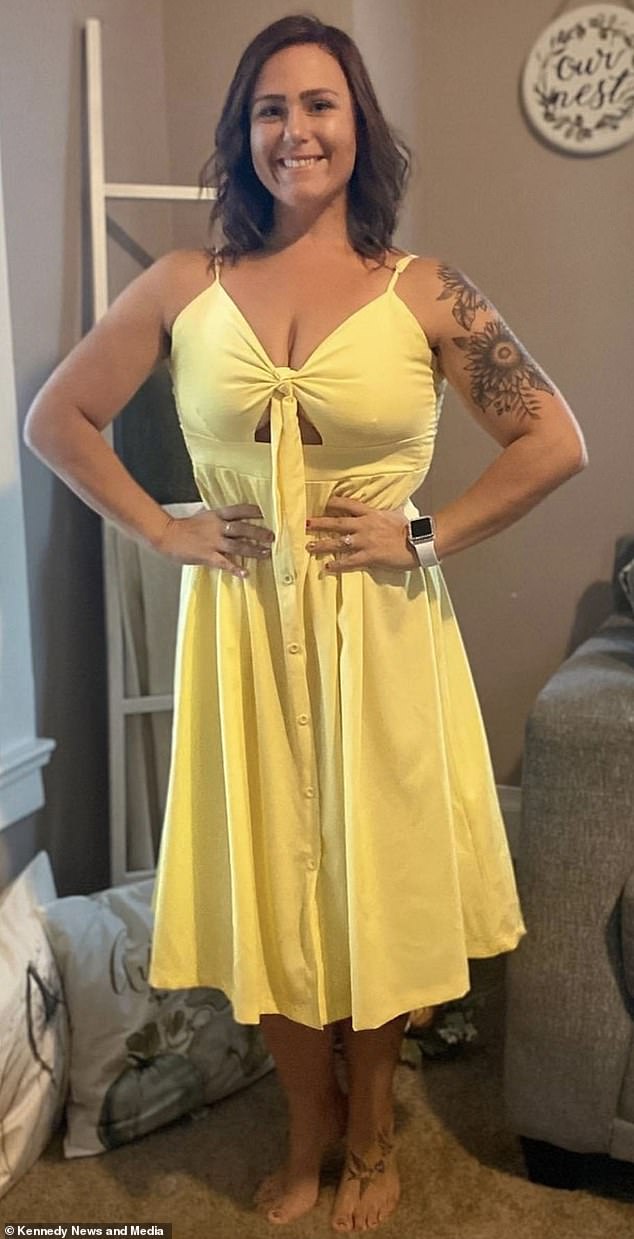 She has since lost over 100lbs, dropped 11 dress sizes and claims she’s often complimented on her new ‘youthful’ appearance, with some even remarking that she’s ‘aged backwards’ 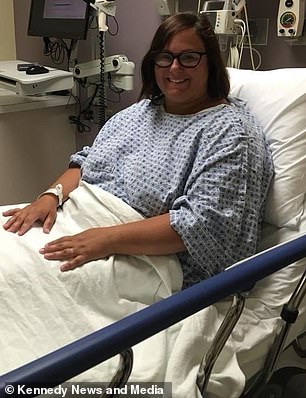 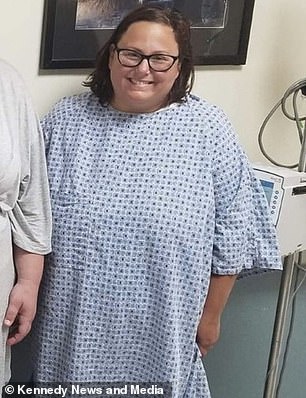 In July 2018 Lauren decided ‘enough was enough’ and after trying various different diets she decided to undergo gastric bypass surgery. She is pictured L-R in hospital ahead of her weight loss surgery

‘I get told that I look younger all the time’, said Lauren, who is now a slender size 4-6.  ‘I’ll get “You look like your own daughter” to “You look ten years younger”.

‘When I look back at photos I absolutely look younger, it’s made me look more youthful. I looked like a middle-aged mother.

‘I think I probably look ten years younger. I’m almost 33 and do look my age, but I think I looked 33 ten years ago.’

Lauren was a size 18 in high school, weighing around 196lbs, and although she didn’t experience extreme bullying, she does remember receiving nasty comments about her weight.no 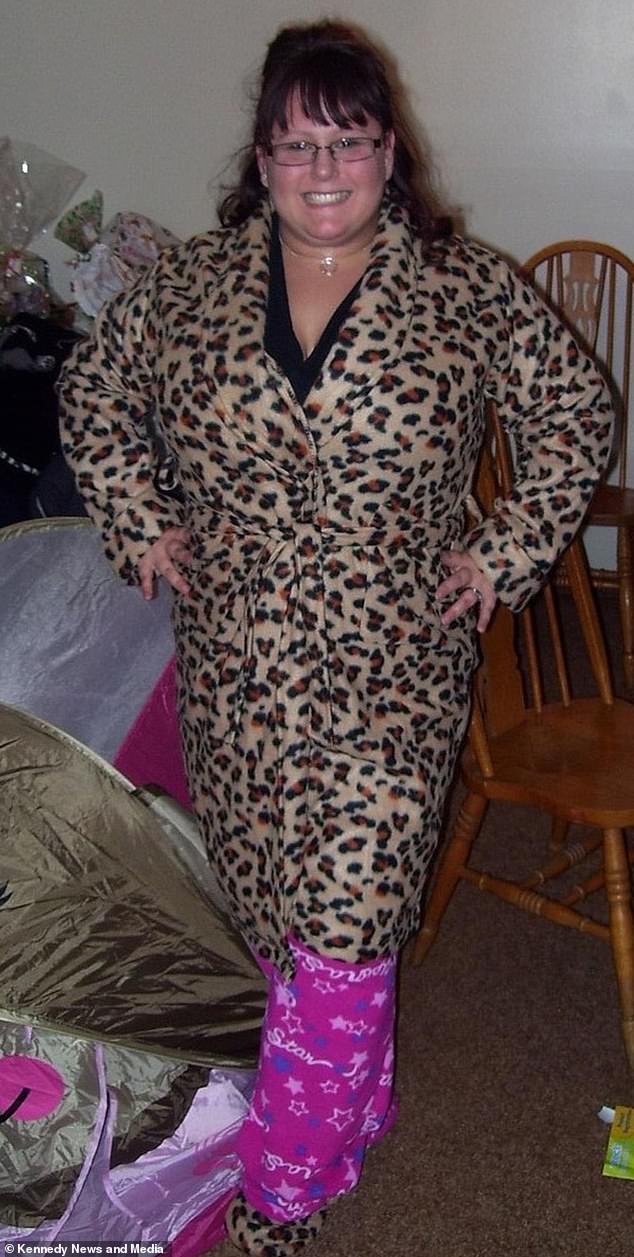 Lauren, pictured aged 21, was trapped in a vicious cycle of binge eating, visiting up to four different fast-food restaurants a day and tipping the scales at 252lbs as a size 26 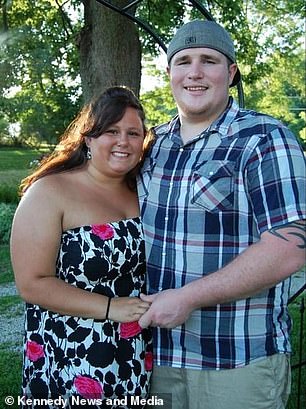 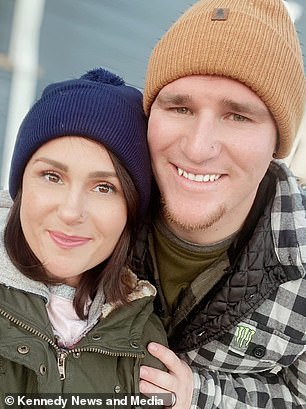 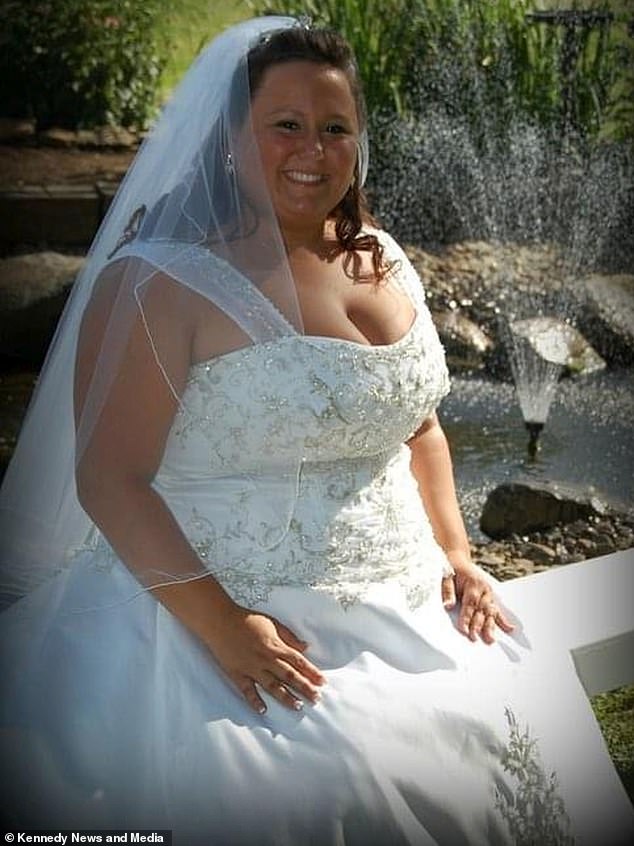 Lauren is pictured on her wedding day in 2011, she was trapped in a cycle of binge eating which would see her spending as much as $1000 a month on fast food 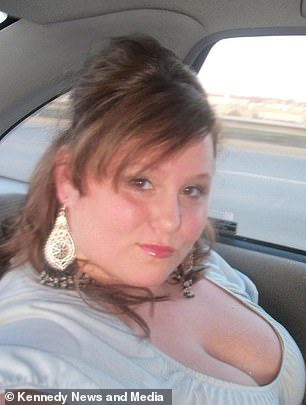 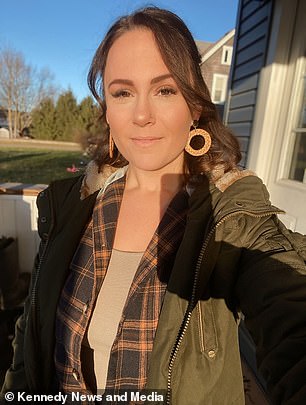 Lauren, pictured right this month, says that while she looks her age, before her weight loss she looked older than her years. She is pictured left at the age of 21 weighing 238lbs

‘In like seventh grade there was a boy that I had liked and I told him that I didn’t like him anymore and he literally said “That’s ok, you’re fat and ugly”,’ she recalled.

‘Looking back, obviously if I remember it the comment still sticks with me. You don’t really forget stuff like that, but at the same time I tried to laugh it off and just move on.

Lauren says she’d been overweight most of her life and as the ‘biggest girl’ in the room would masked her low self-esteem by being the ‘class clown’ at high school.

‘I feel like I always pretended to be that happy fat person,’ she said.

Breakfast: Four Eggo waffles with syrup and butter or Mcdonald’s bacon, egg and cheese bagel with a Diet Coke

Dinner: Takeout such as a large pepperoni pizza or Chinese food with a Diet Coke

‘I was so depressed and had such low self-esteem inside that I didn’t want people to know that so I was always outgoing, laughing and trying to be the centre of attention or class clown. I tried very hard to hide my feelings and emotions for a very long time.

‘But every once in a while there were moments like when I went prom dress shopping and I couldn’t find one to fit me. Moments like that, when you’re standing in a dressing room crying to your mother that you can’t fit anything in the store and the lady is saying “I’m so sorry, we don’t go up to that size”.’

The personal trainer said her binge eating started when she was around 22 and that her depression hit an all time low after having her second child – binge eating takeout food almost everyday for around five years.

‘It wasn’t really any particular type of food. It was more so whatever was in my face I was going to eat until I was sick,’ she said.

‘I would get Chinese food and fill a dinner plate, eat that, and then have a second-round not even five minutes later.

‘I was a big soda drinker. There would be nights where I’d go to the store and buy a Code Red Mountain Dew and the family size peanut butter M&Ms and I would sit and eat the whole bag and the entire drink. I look back and the amount of sugar that’s in that, I can’t believe I am alive.

‘There were some times when my binge eating was at its worst that I’d go to one drive-through and another, and another, and I’d get all kinds of food. I think there was one day that I ate from four different fast food places.

‘I felt comfort in food. It was my way of coping with everyday struggles and when you go to eat those foods it brings you joy. After you eat those foods you feel an immense amount of guilt and shame.’

Lauren said she tried ‘absolutely everything’ and every diet ‘under the sun’ to lose weight and although she managed to at certain points in her life, she’d shortly regain it. 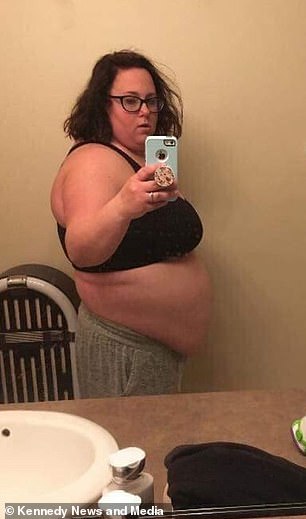 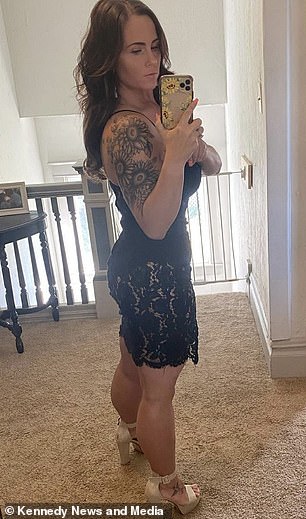 Lauren, pictured left in 2017 before her weight loss weighing 252lbs, says she’d been overweight most of her life and as the ‘biggest girl’ in the room would masked her low self-esteem by being the ‘class clown’ at high school. Right, Lauren now at 140lbs 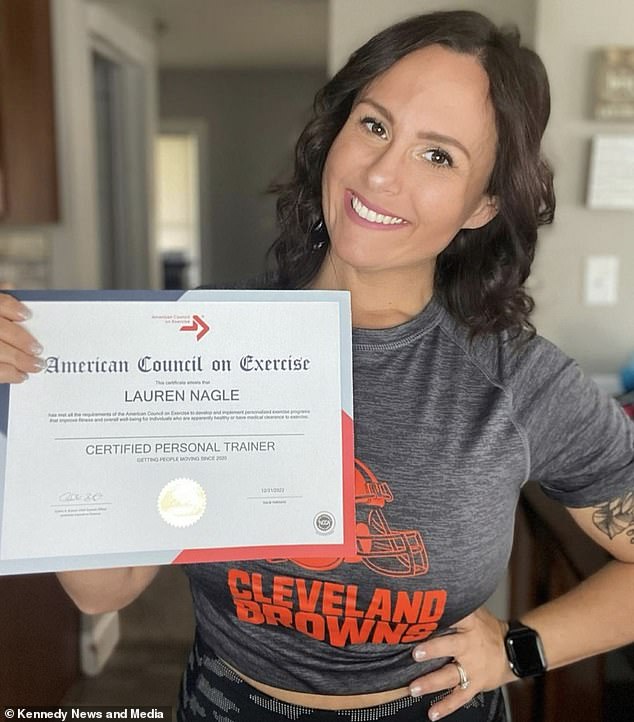 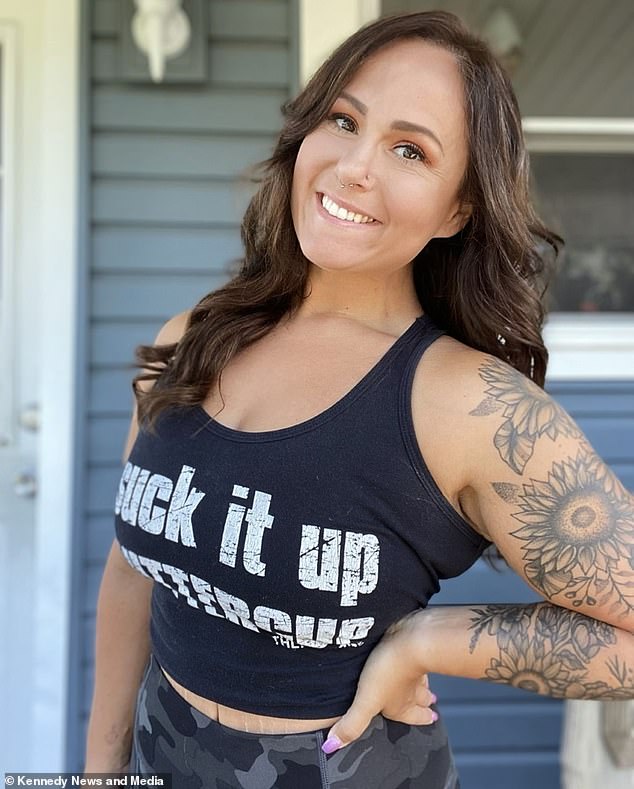 Lauren, pictured in June 2021, now gets joy from exercise instead of comfort eating junk food to cope with stress 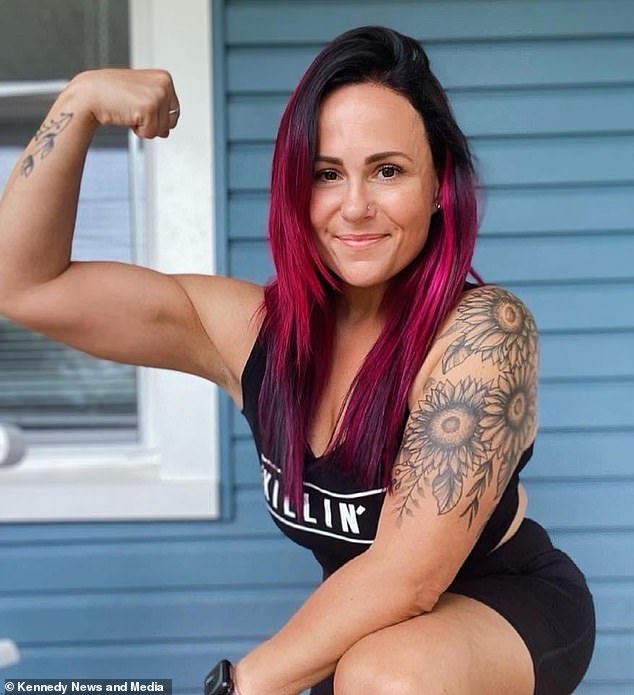 Gym lover Lauren, pictured in June, had gastric bypass surgery three years ago and hit her goal weight of 140lbs seven months after the procedure

The gym lover had gastric bypass surgery three years ago and hit her goal weight of 140 pounds seven months after the procedure.

She’s also since had a tummy tuck in August 2019 and bra line backlift this March.

Lauren said: ‘I was absolutely miserable. Looking in the mirror was awful. I didn’t even recognise who I was.

‘Even trying to use the restroom or taking a shower and trying to clean my body was difficult. I would get winded rolling over in bed. Tying my shoes – I literally couldn’t do anything without feeling like I couldn’t breathe.

Lauren, pictured L-R in December and June at the gym, weighing 140lbs, says her ‘entire life has changed’ since her surgery 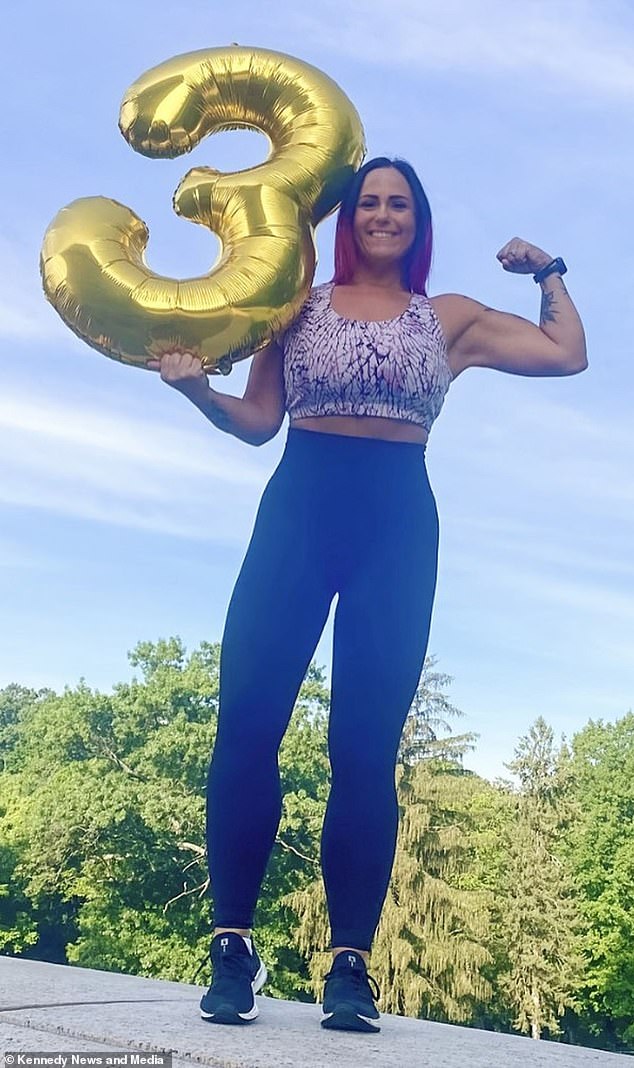 ‘At one point after I had my children I just said enough was enough. Having my kids I realised that I wanted to be able to be alive for them. I don’t mean just alive, I mean truly living.

‘One day my kids were outside playing and my husband was throwing them the ball and I tried to play with them as well and couldn’t even be out there for five minutes without feeling my chest was going to explode. I said this is just not the life I want to live.

‘My entire life has changed. I ended up falling in love with exercise and became a personal trainer. I don’t even know where I would be right now if I wouldn’t have had it.

‘Not only has it affected my own personal health, it’s given me the opportunity to have a new career and help other people.’