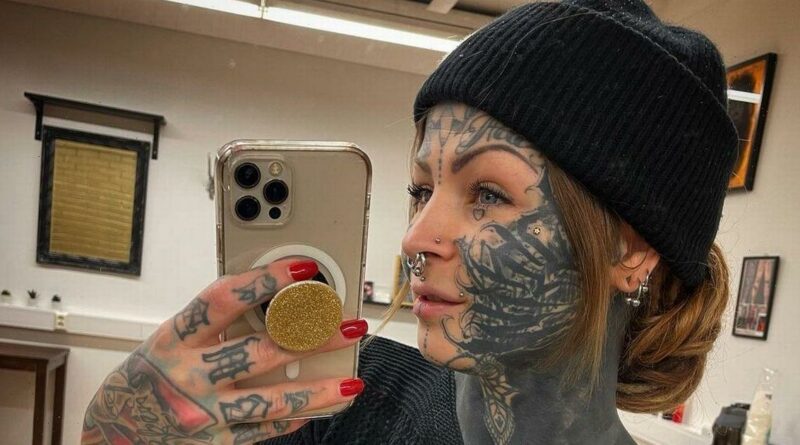 Aleksandra Jasmin boasts a massive following of 179,000 fans on social media where she shows off her ink.

Since she works as a tattoo artist in Finland, she also uses her platform to share some of her creative work.

READ MORE: Tattooed mum shares throwback pic from 13 years ago where she has no ink

But when fans aren't getting the behind the scenes, the mum-of-three is getting her kit off for some racy snaps.

And her latest post is a little different to her usual content as she left admirers gushing and laughing at the same time.

In the photo which shows her posing in front of the mirror, she wrote: "Swipe if you wanna see my shower pic."

When cheeky fans rushed to swipe right to see her nude, Aleksandra put on quite a comical face.

While she was in the shower, the mum squinted when it appeared as though soap went into her eyes.

Her locks were all wet as Aleksandra showed the very top half of her body in the photo.

It garnered just over 5,000 likes in the space of a day since it was shared on Friday.

One admirer admitted: "Shampoo in the eyes is the worst."

Another Instagram fan added: "Best shower pic ever I seen haha," a third follower gushed: "You are so beautiful."

While a fourth social media user commented: "That's me when the water is too hot."

Aleksandra's post got mixed reviews as some were commenting with fire emojis, while others were just giggling.

Previously, Aleksandra got her kit off for a nude snap where she flaunted her multiple ink.

And in the photo, the tattoo artist left little to the imagination.

The snap shows the Finnish beauty posing with a mug as she strategically placed her long locks over her modesty.