The Nationals’ support for fossil fuels is ramping up the risks to Liberal MPs in coastal electorates of NSW and Victoria heading into the federal election, as Resources Minister Keith Pitt cranks up his push for new offshore gas development.

This week the Queensland Nationals MP Mr Pitt opened up the ocean within several kilometres of Victoria’s Twelve Apostles to oil and gas exploration, despite local opposition, and publicly warned the Prime Minister the federal government does not yet have the Nationals’ support to increase Australia’s international climate commitments, as Mr Morrison hinted at the G7 summit. 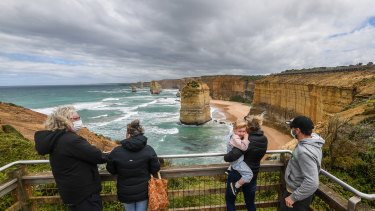 Offshore oil and gas exploration within three kilometrres is shaping as a controversial issue for the federal government.Credit:Justin McManus

Independent MP Zali Steggall, who won the seat of Warringah from former prime minister Tony Abbott after campaigning on climate change, said promoting offshore gas was a “power play” from the Nationals that could damage coastal Liberals’ election prospects.

Mr Pitt is yet to make a final call on the unpopular offshore Petroleum Exploration Licence 11 (PEP-11), which is located off the NSW coast. The licence stretches from Newcastle to Wollongong, and includes Liberal MP Jason Falinski’s electorate.

Prime Minister Scott Morrison and the NSW government said in March that PEP-11 would be terminated, but Mr Pitt said on Thursday the licence renewal is still under consideration.

“I have always said I will give the matter the careful attention it requires,” Mr Pitt said.

When asked if he would support a potential 2050 deadline to reach net zero greenhouse gas emissions and a transition to the “new energy economy” promoted by Mr Morrison at the G7 international summit in the UK this week, Mr Pitt told ABC that “it would require agreement and that has not been reached” with the Nationals.

Ms Steggall said the government’s support for offshore exploration was “a major issue for the local Liberal members along the east coast”. 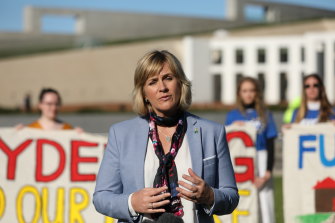 “It’s a power play by the Nats in the Coalition to show they don’t care about the damage they inflict and they’re prepared to put everyone at risk.”

Liberal Senator Sarah Henderson lost her lower house seat of Corangamite to Labor at the 2019 election despite her opposition to offshore drilling. Labor MP Libby Coker warned of environmental risks during her successful election campaign, where she was aided by the Greens and an Independent candidate who also opposed drilling and attracted 9 per cent and 5 per cent of the vote, respectively.

However, a proposed boundary shift is expected to move the Twelve Apostle gas exploration issue into the safe Liberal electorate of Wannon, held by Trade Minister Dan Tehan.

Mr Falinski said he wanted PEP-11 terminated, which is in the powers of Mr Pitt.

“PEP-11 is not going ahead, the PM has made that clear,” Mr Falinski said. “I’ve said from the beginning my community deserves some certainty around this issue and I would prefer that decision to have been made. But the Minister has to go through a process lawfully.”

Wilderness Society manager of policy and strategy Tim Beshara said offshore oil and gas exploration in NSW and Victoria would “be a rallying point” for campaigners in battleground seats.

“Bringing oil and gas this close to the Twelve Apostles will be an own goal for industry and for the government. It will certainly be a rallying point that will bring incredible attention onto the industry and how they are regulated,” Mr Beshara said.

“Right now we’ve got local coastal councils with actively supported campaigns opposed to oil and gas fields in the Great Australian Bight, Sydney and Newcastle, King Island and the Surf Coast. All of these areas have marginal seats.“