When The Notebook hit theaters in the summer of 2004, I was just about to enter my freshman year in high school. Young, impressionable, and obsessed with the notion of true love and second chances, I saw the movie in its opening weekend with a group of girlfriends who sobbed during it as often as I did. I walked out of the theater, still wiping tears from my naïve little eyes, thinking that The Notebook was perhaps the most romantic thing I had ever seen. For the rest of the summer, I obsessed over the incredible love story of Noah and Allie, so much so that I even made my mom take me to the bookstore so I could get my hands on the original source material. But then I actually read Nicholas Sparks’s novel, and without Ryan Gosling’s dreamy face and gorgeous body to distract me, I quickly realized the romantic hero of the film, my romantic hero, wasn’t a hero at all. In fact, I think it’s finally time we talk about how Noah from The Notebook was actually a total creep.

Listen, I understand this might not be the most popular opinion. If you, like me, saw Rachel McAdams and Ryan Gosling’s movie version of The Notebook first, chances are it swept you off your feet, and how could it not? On the surface, it’s a sweet love story about a second chance romance between two attractive characters you certainly don’t mind looking. But underneath Gosling’s washboard abs and McAdam’s winning smile lurks a much more problematic narrative. It took reading Sparks’ original novel, and growing up a bit, to recognize, but now that I see Noah for what he is — an obsessive creep with a penchant for dramatic, unwanted gestures and an inability to take no for an answer — I can’t stop thinking about my original interpretation of The Notebook and why I so wrongly believed it to be a true love story. 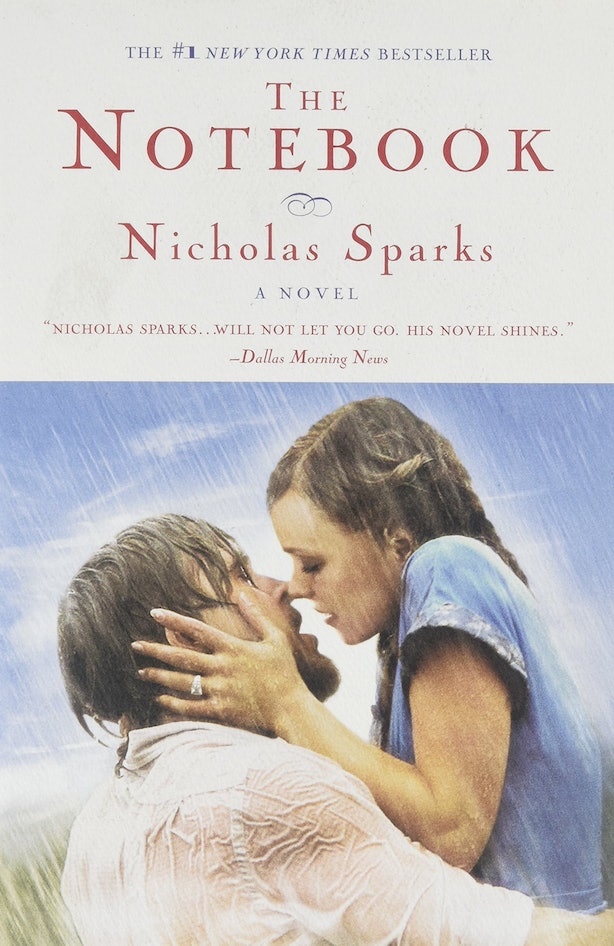 The Notebook by Nicholas Sparks, $12, Amazon

In the movie version of The Notebook, we meet Allie and Noah during the summer they fall in love. From the start, Noah is obsessed with Allie, and dogs her daily to go out with him. When she says no, multiple times, he persists, and even warns her that he is done asking. Then, at a carnival while Allie is with another date, Noah scales a Ferris wheel and threatens to throw himself off the top if Allie doesn’t agree to go out with him. She obviously agrees, not wanted to be responsible for the death of some guy she barely knows, and it signifies the first of many grand and totally inappropriate gestures.

At first glance and from far away, Noah’s actions seem like a grand romantic gesture, one that would many anyone swoon. Upon closer look, though, they can be seen for what they really are: coercion, harassment, and emotional abuse. Not only is Noah continually trying to pressure Allie into dating him, but his threats on the Ferris wheel reinforces the toxic belief that when men act badly, dangerously, or irresponsibly, the women they love (or are attracted to) are to blame. He essentially bullies Allie into dating him, a common trope in movies and books that buy into the "it’s all about the chase" ideology that puts women in incredibly uncomfortable, even dangerous situations.

In Sparks’ original novel, the start of Allie and Noah’s doesn’t play out in the same way. In fact, in the book, there is far less drama: Noah and Allie have a normal interaction when they meet, and spend the entire night together at the carnival, no Ferris wheel stunts needed. From that sweet, antic-free evening, a stable and heartfelt relationship is born, one without all the fighting, crying, and jealousy you see play out on screen. So why then did Hollywood decide to change a seemingly innocent love story into one filled with volatility, abuse, and obsession? As they say in the business, drama sells, but it also reinforces dangerous stereotypes about gender dynamics and power structures in romantic relationships.

The movie adaptation of The Notebook doesn’t stop tainting the original love story at the carnival, not even close. In the film, after Noah finally convinces Allie to go on a date with him — again, by threatening to harm himself and possibly others below by jumping of a damn Ferris wheel — its unsurprising to learn that their relationship is tumultuous, to say the very least. They fight constantly, openly argue in front of others, and even get into physical altercations on the street. In its portrayal of their conflicts, the film pairs each fight with upbeat music and subsequent shots of them making up, so it appears the fighting is romantic. The movie again reinforces the dangerous notion that relationships are stronger if the people in them have gone through hell and back with or for one another. It says to the viewer, like so many other toxic on-screen or in-book relationships do, that strong love, true love, is born out of conflict.

That doesn’t seem to be the message Sparks’s original book was trying to send. Instead of focusing on, or even mentioning, disagreements between the two, the author focuses on the growth and maturity of their love. There are no street side screaming matches, no ice cream cones shoved in each other’s faces, no bickering. Even there breakup is drama free. Instead of being a passionate, tear-filled fight, it’s an amicable parting of the ways. You know, like mature couples do. In Hollywood’s hands, however, the breakup was rough and bitter and honestly hard to watch, because neither Noah or Allie walked away from it looking like the bigger person.

Despite these two major changes that put the film in a much worse light than the novel, there are two extremely problematic moments both the book and the movie share: Noah’s persistent letters to Allie, and his decision to buy her dream house without her. Again, at first glance, these emotional acts seem sweet, thoughtful, and deeply romantic, but at their core is an unhealthy and unwanted obsession from Noah directed at Allie. Despite the fact they are broken up, Noah can’t let Allie go.

For a year, he writers her nonstop — every day in the movie, and every month in the book — without ever getting a response. Sure, in the end it was revealed Allie’s mother kept the letters hidden from her, but that isn’t a fact Noah was aware of. All he knows was that, despite his repeated and unwanted attempts to communicate, his ex did not respond. In other words, he was harassing her and forcing his presence into her life without her permission. He is, in essence, every hookup or every ex who has ever slid into your DMs without notice, and we all know those people are total creeps.

Despite being apart for years, Noah still buys the house he and Allie made love in for the first time, and fixes it up to look like her dream home. For months, he toils away on the property, fixing it up and thinking of nothing but Allie, a girl he dated years before and hasn’t spoken to since. If that isn’t an unhealthy obsession, I don’t know what is. Maybe it appears to be a sweet gesture, to hold out hope that your supposed true love will come back, but in reality, it’s just another way Noah tries to manipulate Allie’s emotions, and it works. In the book and the film, it’s news about his completed house that brings Allie back to Noah. Was that his plan all along? It’s impossible to say, but what is quite clear is that Noah has a very obvious toxic pattern of behavior where he bullies, tricks, and abuses his way into Allie’s life. I don’t know about you, but that doesn’t sound like true love to me.

So why did I think The Notebook was the perfect love story? I think it was a combination of my naïveté upon first seeing the film and the fact that Hollywood continually reinforces dangerous romantic stereotypes that put women in danger. I was perfectly primed to experience it as nothing short of romance. But now that I’m older, now that I’ve read the source material and seen the story for what it is, it’s time we faced the facts: Noah Calhoun isn’t an ideal romantic lead, not even close. He is toxic, dangerous, and emotionally abusive in the film adaptation of The Notebook, and he is a possessive, obsessive love interest in the novel. The truth is, is a long history of romantic book "heroes" who actually assault, abuse, or harass the heroine, and The Notebook is just one of many examples. The time to talk about them is long overdue.