Netflix has released a new trailer for the third 365 Days film which promises fans more steamy romps in the third instalment in the franchise.

The Next 365 Days, out on 19 August, will show the progression of the relationship between Laura Biel (Anna-Maria Sieklucka) and Mafia boss Massimo Torricelli (Michele Morrone).

Despite enormous controversy surrounding the release of the first film, Netflix has pressed ahead with the franchise’s third installment.

The second film in the trilogy was released in April 2022, which came to  a dramatic end when Laura was dramatically shot by Massimo’s ex-lover Anna.

The new trailer confirms Laura made it through the shooting, with the new film set to explore their relationship further.

But clips appear to show Laura’s turmoil as she has to make a decision about the future of her relationship.

When we left the couple at the end of the second film, Laura had become the object of Nacho’s affections – and it seems that storyline will unfold further in the third installment.

In one shot of the trailer, Laura, dressed in a little black dress, stands at a square bar in a sleek club, where Nacho can be seen staring at her from the other side of the bar.

However, Massimo immediately steps into shot to block his beau’s view of the love rival, giving an insight into the difficult decisions Laura will have to make in the film.

Laura, played by Anna-Maria Sieklucka, will have to make some tough decisions in the newest film in the trilogy

Tension appears to build between the pair as, in a later clip, Massimo says: ‘I think you’re hiding something from me’ before throwing a glass on the floor.

Another clip shows Laura playing with fire as she is led across the side of an outdoor swimming pool by Nacho – and things get very close.

As she walks with Nacho, a voiceover says: ‘A woman that lives only for her man will be unhappy forever.’

Laura also says: ‘I need to figure out what I want.’

She is later pictured telling Massimo: ‘There is no us.’

Although viewers will have to wait a little longer to find out Laura’s decision, they can be sure to be entertained by yet more sultry scenes in the new film.

Several clips in the trailer show Massimo and Laura caught in the throes of passion, while the couple visits a pole dancing club in another scene. 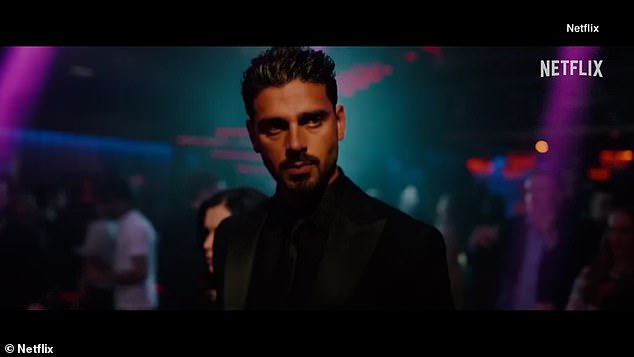 In the first film Massimo (pictured), played by Michael Morrone, kidnaps Laura and holds her hostage for a year 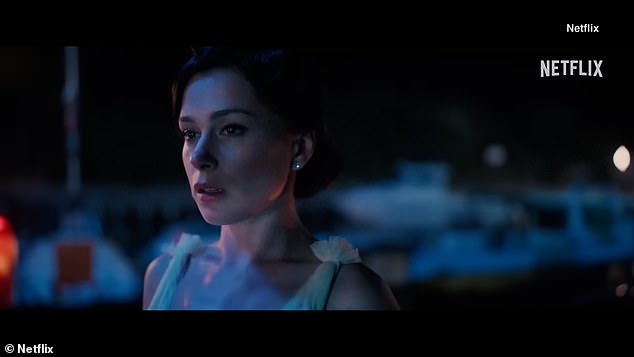 Laura will have to choose between Massimo and Nacho, who has shown an interest in her since the second film in the franchise

When the first 365 Days film came out on 2020 it was slammed by campaigners who argued it glorified rape and trafficking as the storyline followed Massimo kidnapping Laura while she was on holiday in Sicily and giving her a year to fall in love with him while she is held hostage.

The films are based on a book trilogy by Polish author Blanka Lipinska.

As well as the controversial storyline the film also made headlines for its incredibly graphic sex scenes, with one seeing Laura tied up in a room so she can watch Massimo have a steamy encounter with a sex worker.

In one of the movie’s most memorable scenes the pair finally have sex in a boat as Laura begins to fall under Massimo’s spell.

Viewers were left open-mouthed by the racy sex scenes, claiming it made Fifty Shades of Grey look ‘PG’.

But their dysfunctional relationship doesn’t always run smoothly, as Massimo lashes out at Laura by dragging her into the bedroom after she sees one of his exes at a function.

Despite several complaints about the content of the film and a petition to remove it from Netflix gaining thousands of signatures, the streaming service stood firm.

A spokesperson said at the time: ‘We believe strongly in giving our members around the world more choice and control over their Netflix viewing experience,’ the spokesman said in emailed comments.

‘Members can choose what they do and do not want to watch by setting maturity filters at a profile level and removing specific titles to protect from content they feel is too mature.’