Spoilers for the April 22 episode of Fear The Walking Dead. Fear The Walking Dead Season 4’s premiere ended with a cliffhanger that demanded a major rewind — which the narrative provided in Episode 2. There’s a reason that the Clark family is out ambushing innocent travelers like Morgan Jones, one that is going to be explored. Who are the Vultures on Fear The Walking Dead? Their idyllic Austin community was visited by a new threat.

The group is lead by a character named Mel. He is played by Kevin Zegers, who you may recognize as a ’90s kid star from movies like Air Bud and Treasure Island or from films like Transamerica and The Jane Austen Book Club. This new big bad quickly establishes himself as having a kind of Austin, Texas hipster cool that you can’t quite get on the original Walking Dead series. Even Negan doesn’t have this much style.

Other than Mel’s overall vibe, however, this whole scenario feels a lot more Walking Dead than the Fear fans are used to on the show. The group isn’t from the comics, but just the name "Vultures" sounds a lot like the East coast and comic book villains like the Wolves, the Whisperers, the Claimers, the Termites, and of course the Saviors. The Vultures spray paint numbers, presumably of communities they have overcome on flags, and ominous markings are a stable of many Georgia and Virginia-based groups. Plus, Madison uses a walkie talkie better than Rick Grimes ever could.

Speaking of Madison, if you’re wondering what happened in that time gap between the dam exploding and the gang setting up shop in a baseball stadium, the matriarch quickly summarizes. They were separated and they found each other again. In the words of David S. Pumpkins — any questions? 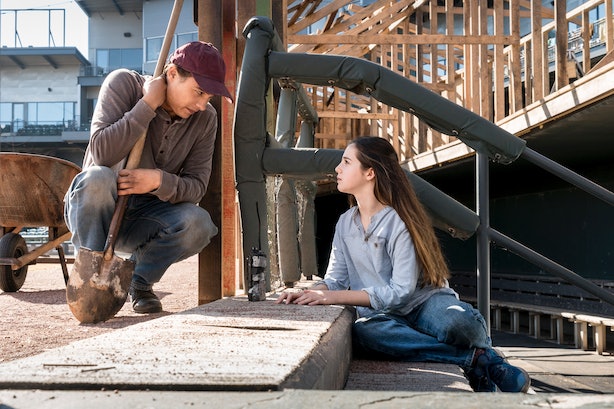 Unfortunately, all of the growth that the Clarks have done as a family and as post-apocalyptic survivors doesn’t stop them from getting played by a child. They take in a girl named Charlie who, unbeknownst to them, leads the Vultures right to their door. Dramatically, too, as Mel does a whole bicycle routine before settling down with a beer and waiting for Madison to come to him.

That’s what the Vultures do — they wait. Mel tells Madison that they’re there to take out their entire community, but not exactly by force. They’re patient. They know that Nick’s crops are dying. Either Madison and her group can join the Vultures, Mel says, or the Vultures will wait for them to die and take everything they have. The Walking Dead franchise doesn’t usually have passive aggressive villains, so it’ll be interesting to see how this plays out.

"There will be some new, unexpected adversaries," said co-showrunner Andrew Chambliss in an interview with Entertainment Weekly not about the Vultures specifically, but about Season 4 Fear The Walking Dead villains in general. "They may be adversaries who it’s not entirely clear how to deal with them. It may not be as simple as picking up weapons and going to war with them."

At the end of the episode, a flash present reveals that Maggie Grace’s character Althea has one of the Vultures flags. The group assumes she is one of them and is ready to kill her for it — so we know that the Clarks haven’t joined the Vultures yet — but Al doesn’t know what the flag means. She offers to tell them where they found it, and this group: which includes Strand, Alicia, Morgan, Nick, Luciana, and John Dorie as well as Althea is on the road again.

Where’s Madison? That’s a question that Fear The Walking Dead has yet to answer. These new villains have clearly changed our once noble heroes, and possibly separated them yet again. What exactly they’ve done should be exciting and terrifying to uncover in Season 4.