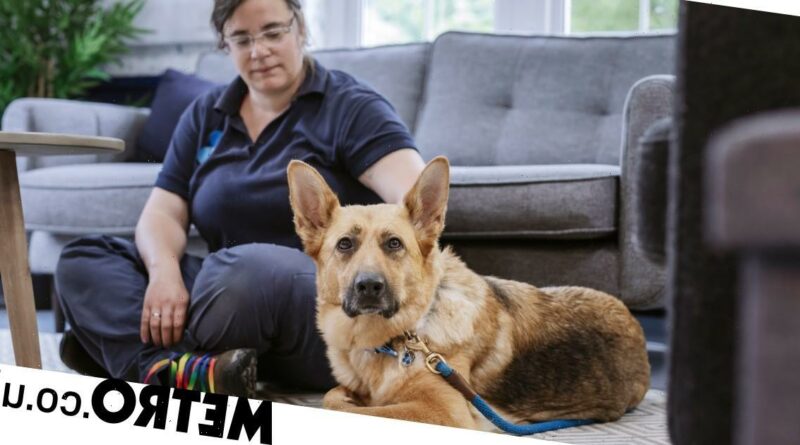 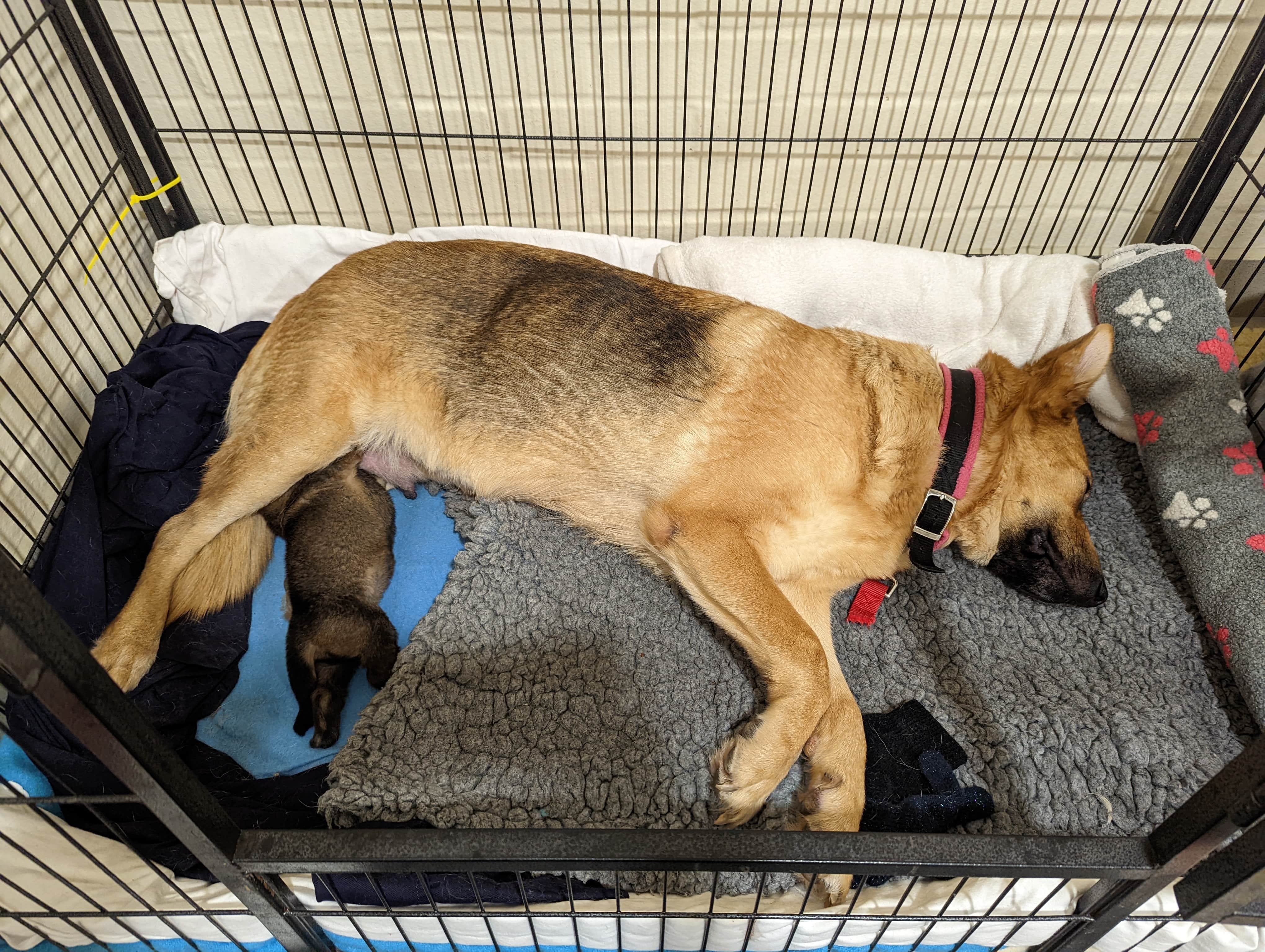 A puppy and her mum found abandoned under a bush are starting their new lives in loving new homes this Christmas.

The three-day old German shepherd puppy and her mum were taken to the Blue Cross at Burford, Oxfordshire, where they needed expert care.

Rachel Hazley, Rehabilitation Trainer and Behaviour Advisor at Blue Cross, explained: ‘We suspect that the mother, who we named Mila, had been used as a breeding bitch and dumped because their so-called owner saw no financial incentive to keep and support her and her one surviving puppy, who was born with an open hernia.

‘Mila was so scared. She would just cower in the back of her kennel and bark or growl, out of fear. It took two weeks to get near to her.’

The tiny pup, who was named Mitzi, wasn’t getting enough milk and would have died without intervention, so staff stepped in to provide supplementary feeding.

Mila also showed signs of separation issues, and while she remained scared of everyone, she needed human company and reassurance from afar to nurse. So, her carers took it in turns to stay overnight in the kennels.

‘We initially tried supplement feeding Mitzi through the night,’ said Rachel. ‘But Mila became increasingly stressed about us doing this, and although she was feeding during the day, she was not providing any other maternal care at all.’

The decision was made, when Mitzi was two weeks old, to separate her from mum. Mitzi went into foster care where she was fed every three to four hours, round-the-clock, and received all the socialisation she needed.

Within a month, she was eating from her carer’s hands.

Rachel said: ‘We started to see improvements in Mila’s confidence every day, and little bits of her personality started to show.

‘We knew she had a cheeky and intelligent side in there somewhere and to see her playing with another dog or out in the sunny countryside gave us a lovely glimpse of the dog she would grow into in time.’

Thanks to the sleepless nights, hard work and dedication of the Burford team, Mitzi survived, and Mila learned that humans could be kind.

Both are now in happy, loving homes where they will be spending their first Christmas with their families knowing they are safe and loved.

Mitzi is now called Ash and is living with another dog, Poppy, and cat, Dave, who was also rehomed from Blue Cross and comes into the centre regularly as an ambassador to help other kennel dogs.

New owner Alison, whose daughter also volunteers at the horse unit in Burford, said: ‘Ash has become a very big part of our family in a very short space of time and it is very easy to forget sometimes that she is still just a big puppy.

‘She is an incredibly loving and affectionate dog with everyone she meets, and for a puppy who grew up without litter-mates, she is also remarkably respectful and gentle when saying hello to any friendly canines she may meet when out and about on her walks.’

Like many German Shepherds Ash is loyal and loves to learn and help, so her owners hope she may one day be able to become an ambassador dog too. For now, she’s loving her first family Christmas.

‘She has absolutely loved her first foray into the world of snow and her first Christmas with us will involve the obligatory family dog walk on Christmas Day, as well as unwrapping a few presents from Santa,’ said Alison.

‘I am also sure there will be a bit of turkey to be found in her food bowl at tea time.’

She added: ‘It would be very hard to imagine family life without her now.’

Mila, now named Tessa, has also settled into her new home with her new family.

Owner Richard said: ‘She is a very gregarious and sweet natured dog. She knows how to tell the time now and follows us around when it’s approaching walk time.

‘When meeting other dog walkers she is in her element, she wants to play with every dog she meets.

‘She responds to “biscuit” no matter where she is in the house, and another endearing trait is her tail wagging now which is spontaneous and she also makes eye contact.’

Tessa will be well and truly spoilt this Christmas, with Richard treating her to a new fleecy blanked along with a selection of ‘indestructible’ toys as she loves to chew. She’ll also have a big bag of dried duck fillets – her favourite – waiting for her in her stocking.

After a tough year for both dogs, they’ve made fresh starts and can look forward to a brighter future.