Home » Lifestyle » ‘No jab, no play’ for theatre performers

All performers in the award-winning musical Come From Away, which closed its doors in Sydney on June 27, will have to be vaccinated before they return to the stage when NSW begins reopening next month.

The show is the first Australian theatre company to mandate vaccinations, which also extends to the crew. 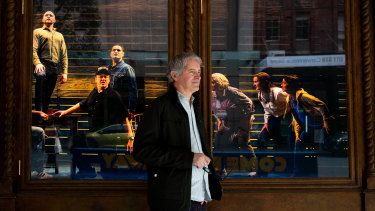 “We want to lead by example,” said producer Rodney Rigby. “We want to be a safe house and get back to work as fast as we possibly can.”

The move comes after productions on Broadway and in London’s West End introduced similar “no jab, no play” rules for performers earlier this year.

Come From Away has been dogged by COVID shutdowns for its entire Australian run. It was closed down in Melbourne and Brisbane before being hit once again in Sydney.

“Our employees have spent more time this year stood down without pay than working and we want to do everything we possibly can to create the safest possible working environment for everybody on Come From Away,” said Rigby. “It’s been devastating to us. We have only played to seven per cent of our potential audience in Sydney.” 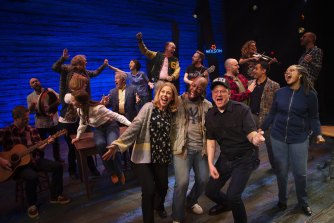 The cast of Come From Away has been stood down without pay due to the pandemic.

Rigby said the production was on target to have almost all 60 performers and crew vaccinated by October 4.

Media Entertainment and Arts Alliance chief executive Paul Murphy said the union was in favour of vaccination for all workers “where it is reasonable and safe to do so”.

However, he urged employers not to rush the process.

“They must engage with employees and contractors and explain their situation respectfully as consultation is critical to ensure everyone is informed and moving in the right direction,” he said. “Every workplace will be different and it is not possible to make a blanket policy when there are so many variables.”

A spokesperson for NSW Health said it was too soon to give definitive guidance on vaccine requirements for theatre performers but that there would be clarity on the issue once health orders were finalised.

Michael Cassel, the Australian producer of Hamilton said Thursday’s roadmap “was pretty clear regarding what is required of audience and staff in venues so we’ll be adhering to that”. He said plans for the resumption of performances would be announced soon.

And outgoing Opera Australia CEO Rory Jeffes said vaccination would be a “critical factor” for the company getting back to work, adding that OA was still consulting with employees about a potential vaccine mandate.