Home » Lifestyle » Northern Lights TONIGHT: The best places in the UK to see the aurora borealis 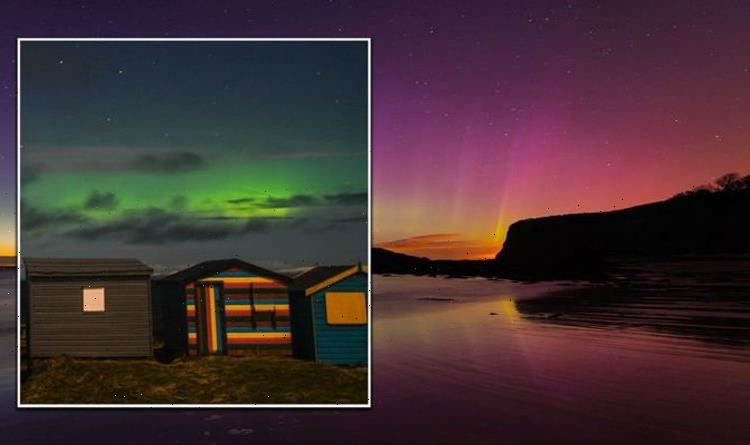 Carol Kirkwood reveals where you 'might see Northern Lights tonight'

The Northern Lights could be visible to residents across the UK this evening, with the Met Office predicting the natural phenomenon could spread as far as Devon if skies remain clear. This will be the second time this week that the colours of the aurora borealis have lit up skies across the UK.

On Wednesday, the lights were spotted in parts of southern England due to what the Met Office describes as a “coronal mass ejection”.

Should conditions continue as they are, the Met Office predicts the Northern Lights may appear again as the skies darken on Thursday evening.

She said: “As was predicted by the Met Office Space Weather Operations Centre, a coronal mass ejection impacted with the Earth yesterday.

“The resulting strong geomagnetic storm meant the Northern Lights were visible across large areas of the UK overnight last night.

“We’ve had reports that the aurora could even be seen in some central areas of the UK, which is possible when a storm of this magnitude impacts the Earth.

“This means there is the potential for further sightings of the Northern Lights overnight, although there will be spells of patchy cloud over Scotland which could limit visibility in places.”

As the name suggests, typically the Northern Lights are most visible in the north.

However, the Met Office said people are more likely to see them further south than usual at the moment.

According to forecasters at the Met Office, the stunning light display could be spotted between the late hours of Thursday evening and the early hours of Friday morning.

Where can you see the Northern Lights?

Sightings in the UK are commonly reserved to the north of the country, with Scotland one of the most popular places to see aurora borealis.

However, the display is likely to appear in certain parts of the south too, according to the Met Office.

Natural Trust lists some of the hotspots across England and Wales where the Northern Lights have been known to appear before.

But the Northern Lights have also been known to appear in Cornwall, Devon and even the Yorkshire coastline in recent years.