New federal Education Minister Jason Clare says he is not interested in stoking culture wars over the national curriculum and has pledged to be a strong defender of teachers after Opposition Leader Peter Dutton vowed to reignite the “values” debate over what students are taught.

Clare, who was Prime Minister Anthony Albanese’s surprise pick for the education ministry, took the reins this week after a turbulent period that saw the portfolio change hands twice during the COVID-19 pandemic under the Morrison government. 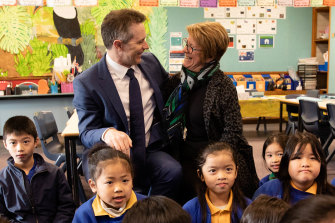 Speaking on his third day in the job, Clare sought to draw a line under the curriculum battles that raged during the last parliament, which saw then-ministers Alan Tudge and Stuart Robert lead a successful push for the new syllabus to elevate the study of Australia’s Western and Christian heritage.

“The former government formally endorsed the revised curriculum two months ago on the first of April. It’s now been endorsed by all of the education ministers across the country.”

Dutton said this week that prosecuting a “values argument” over the new national curriculum would be one of the main areas of focus for the party over the next three years, as he criticised “extremism” among some educators and condemned Labor as being beholden to the teachers’ union.

“If it was limited just to environmental issues or just to climate change, then it would be bad enough. The extremism of some of the teachers and the language that they use, the approach that they take – it’s across a broad range of policy areas,” Dutton told Sky News’ Bolt Report in one of his first interviews since securing the Liberal leadership.

His comments come several months after Robert, who was then-acting education minister, blamed “dud teachers” from public schools for the decline in the academic results of Australian students while praising private schools for employing only quality teachers.

Clare, who describes himself as a “proud product” of the public education system, delivered a different pitch, saying: “You won’t hear me say a bad word about teachers.”

“My own story shows the importance of education. I’m the first person in my family to finish high school. In western Sydney in the 1960s, not a lot of kids from working-class backgrounds went on to finish high school or go to uni. Certainly, my mum and dad never dreamed that that’d be possible for them,” he said. 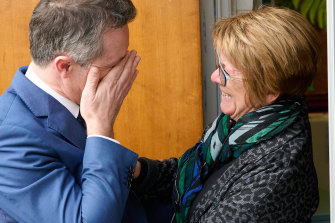 Clare, who had an emotional reunion with Fry, says: “You won’t hear me say a bad word about teachers.” Credit:Michael Quelch

Among the challenges confronting the new minister will be renegotiating the next four-year state-federal funding deals for public and private schools, which will kick in when the current agreement expires at the end of next year. Clare said he spent the first days in the job meeting and speaking with his state and territory counterparts, and contacting university vice-chancellors.

He said his immediate priority was steering the government’s childcare reforms, which will increase subsidies for 96 per cent of families, through parliament by the end of the year.

Clare first entered parliament in 2007 as the member for Blaxland, former prime minister Paul Keating’s old western Sydney seat, and was a minister in the Rudd-Gillard governments. In opposition, he most recently held the housing portfolio and was widely regarded as one of Labor’s strongest performers during the election campaign, taking a leading role when Albanese was sidelined with COVID-19.

Nonetheless, his appointment as education minister surprised colleagues as Tanya Plibersek had held the portfolio in opposition for six years. Plibersek, long considered a leadership rival to Albanese, was shifted to the environment and water portfolio.

Clare said being made education minister was a “dream come true”. On Friday, he made an emotional return to his old primary school, Cabramatta Public, in Sydney’s west, visiting his former teacher Cathy Fry.