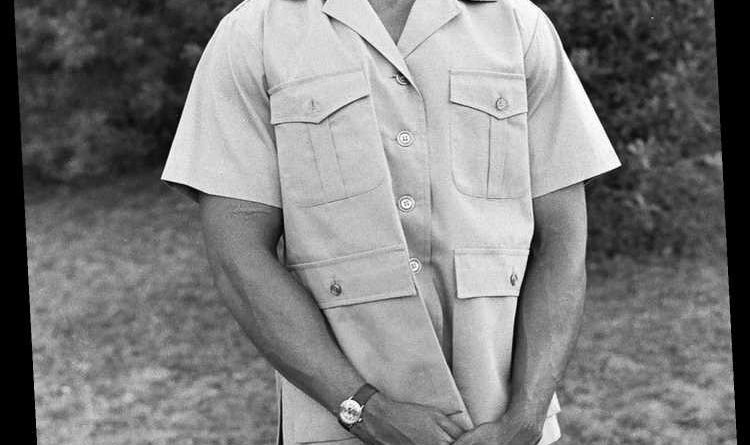 The co-founder of the Black Panther Party (BPP) was born in Monroe, Louisiana, and grew up in Oakland, California, before attending Merritt College, where he played a role in getting the first African-American history course added to the school’s curriculum, according to the National Archives. Then in 1966, Newton and Bobby Seales founded the BPP, which was organized to help defend the lives of African-Americans in the United States.

“We’ve never advocated violence, violence is inflicted upon us,” Newton told the New York Times in 1970. “But we do believe in self-defense for ourselves and for Black people.”

Thought to have been inspired by Malcolm X, Newton adopted and advocated armed self-defense in Black communities, according to the New York Times. “They would patrol the streets, guns drawn, turning them on drug dealers and police officers alike,” the Times reported of the BPP under Newton.

The party grew to international fame — even overseas in China, where in 1970, Newton was greeted by thousands of Chinese citizens who supported the BPP.

Newton’s last words before getting shot and killed by Black Guerilla Family member Tyrone Robinson were, “You can kill my body, and you can take my life but you can never kill my soul. My soul will live forever!” The activist was laid to rest in 1989 at Evergreen Cemetery in Oakland, and will always be remembered for his heroic fight to protect and help foster the Black community. The Nobel laureate and author of treasured novels such as Beloved, The Bluest Eye and Song of Solomon, was born Chloe Ardelia Wofford in Lorain, Ohio, in 1931. “Toni” was a nickname that came from her Catholic name Anthony, after St. Anthony of Padua, and “Morrison” came from her ex-husband, Harold Morrison, whom she married in 1958, then divorced in 1964.

The beloved author died at 88 and was the only African-American woman to earn the Nobel Prize for literature, according to The Guardian. She was also awarded the Pulitzer Prize for fiction in 1988. After graduating from P.D. Jackson Olin high school in 1992, Flowers became the first person in her family to attend college. She accepted a Track and Field scholarship to the University of Alabama at Birmingham, where she would become the school’s first seven-time All-American, according to her website. She then went on to try and qualify for the 2000 Olympic track team, but didn’t make it. However, a twist of fate put her on the path to bobsledding.

Two years later, Flowers and teammate Jill Bakken beat out two front-runner German teams to win gold at the 2002 Olympics. They became the first American women to win, and Flowers became the first Black athlete ever to win a gold medal in the winter Olympics.

”I didn’t know I was the first,” she told the New York Times after her win. ”I hope this won’t be the end of it. I hope you’ll see other African-American girls and boys who want to give winter sports a try because there are not a lot out there.” The trailblazing journalist, novelist and playwright — once described by Langston Hughes as “a strangely brilliant Black boy, who had read everything and whose critical mind could find something wrong with everything he read” — moved to New York City’s Harlem neighborhood in the early 1920s and was regarded as one of the most forward-thinking literary minds of his day.

He became the circulation manager of a white-run magazine, The World Tomorrow, a rare position for someone of color at the time, and also founded two magazines (Fire!! and Harlem) before one of his short stories was adapted for Broadway.

Cordelia the Crude: A Harlem Sketch opened as the play Harlem on his day in history and went on to have 93 performances before it went on tour, according to the Kennedy Center.

His most notable books include Negro Life in New York’s Harlem, The Blacker the Berry and Infants of the Spring. Born Malcolm Little in Omaha, Nebraska, in 1925, the human rights activist became one of the most popular figures during the civil rights movement. He was killed while standing at a podium about to give a speech inside the Audubon Ballroom in N.Y.C. Three men were convicted of the crime: Mujahid Abdul Halim (known as Talmadge Hayer and Thomas Hagan), Muhammad Abdul Aziz (known as Norman 3X Butler) and Khalil Islam (known as Thomas 15X Johnson). All were sentenced to life in prison.

However, prosecutors announced in February 2020 that they would reopen the investigation into his assassination following the release of a docuseries about the 1965 killing. The six-part Who Killed Malcolm X? first aired on Fusion but began streaming on Netflix, and proposed that two of the three men convicted of the crime were innocent, and were not even present when Malcolm X was killed. The hip-hop duo’s “Parents Just Don’t Understand” was the first hip-hop song to ever get nominated for a Grammy. DJ Jazzy Jeff and The Fresh Prince, a.k.a. Jeff Townes and Will Smith, made history as the first-ever best rap performance Grammy winners, but declined to pick up their award when they won.

“We chose to boycott,” Smith told the New York Times at the time, as a response to the Grammys choosing to not televise the inaugural category and their win.

“You go to school for 12 years, they give you your diploma, and they deny you that walk down the aisle,” he added. From law clerk to Federal Court judge, Motley had an incredible career that set the path for many to follow. Born in 1921, the famed civil rights lawyer started as a law clerk at the National Association for the Advancement of Colored People Legal Defense and Education Fund, where she clerked for Thurgood Marshall, according to the National Women’s Hall of Fame. She rose up in the ranks and became the first Black woman to serve in the New York State Senate, and the first woman and Black person to serve as Manhattan Borough President. Then in 1966, President Lyndon Johnson named her a Federal Court judge and she became the first Black woman to serve in that position, as well.

“As the first Black and first woman, I am proving in everything I do that Blacks and women are as capable as anyone,” the organization reported her saying.

Motley died in 2005 from congestive heart failure at 84 years old.