The set-up is guaranteed to bring today’s helicopter parents out in hives — hordes of gleefully unfettered pre-schoolers charging about outdoors, jumping in puddles, brandishing pointy sticks, even toasting marshmallows on campfires.

Welcome to Little Forest Folk, London’s first outdoor nursery. Yes, an outdoor nursery. In which children aged from two to five learn and play outside in a wild part of Wimbledon Common from 9.30am to 3.30pm, rain or shine, which — inevitably — means a fair bit of rain. Children play together outside at Little Forest Folk in Wimbledon, which is London’s first outdoor nursery

‘Children don’t tend to notice or feel weather as much as adults. We provide Scandinavian outer layers and each week send parents an email detailing the weather the coming week.

‘There’s an old Scandinavian proverb: “There’s no such thing as bad weather, only bad clothing.” We wholeheartedly agree” ’.

And she’s far from alone. Earlier this month Ofsted’s Amanda Spearman gave a speech in which she underlined the importance of encouraging young children to ‘do what children do best. Running, jumping, skipping, scooting and climbing’.

‘He has said he thinks this is an incredibly valuable thing and the children will recognise this when they look back on the experience,’ says Leanna.

She and James are also winners of the 2018 Queen’s Award. So it’s no surprise that they have a waiting list that’s 2,100 strong. 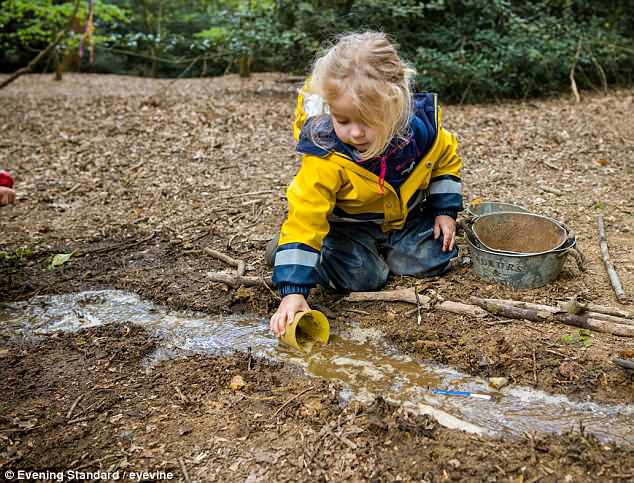 Leanna and James, who met while working in a safari camp in Botswana, southern Africa, came up with the idea of a forest nursery in the autumn of 2011 when their first child, Ella, now seven, was six months old.

‘When she started crawling, she wanted to go outside all the time. We were living in London and it was not the way we had grown up.

‘She would be banging on the patio doors and playing on this tiny patch of grass. We wanted her to have a childhood like we’d had, but we didn’t want to move to the country.’

Leanna, 40, grew up in Merthyr in Wales, while James, 39, was from the countryside in New South Wales in Australia. She returned to work as an analyst in the Home Office when Ella was nine months old, and the couple discovered that the kind of childcare they wanted for their daughter simply didn’t exist. 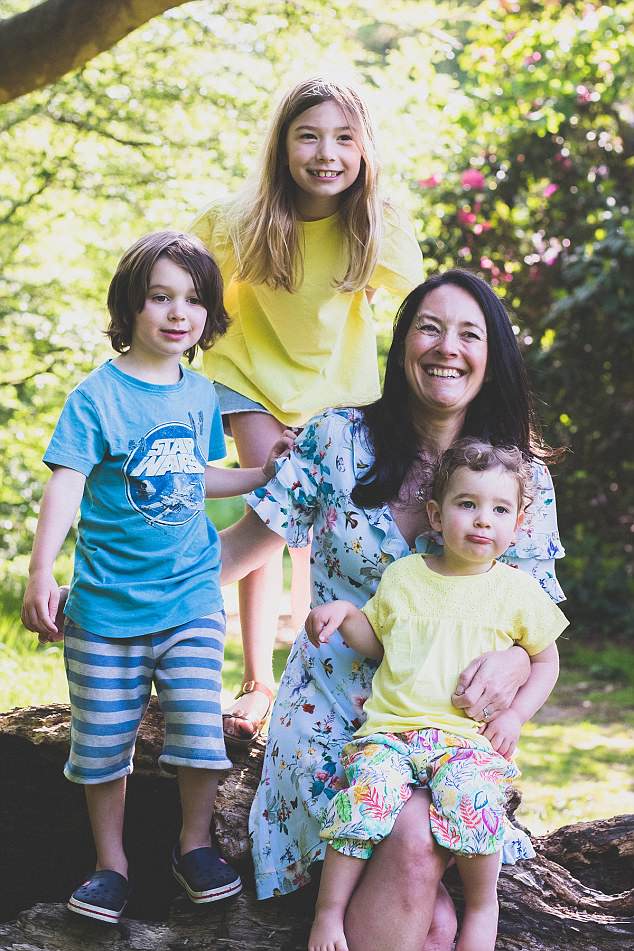 ‘We thought we needed to create some way of her being outdoors all day long. We liked the Scandinavian system. We wanted to do something like that.

‘I must have been Googling and we talked briefly about moving to Scandinavia so that she could have that type of education. Then we kept coming back to “but we like our lives here”,’ recalls Leanna, who talks nine to the dozen and fizzes with energy.

When their second child, Jack, arrived in 2013, they decided to make this dream a reality. Leanna did not return to her job, and they drew up a business plan.

‘It was an unheard of thing then — now it is much more popular,’ says Leanna.

None of the banks would lend the couple any money and they didn’t qualify for a government start-up loan either because you have to have been trading for three months before you can apply, which was impossible in their case.

‘So we decided that we would remortgage the house. We thought: “We are doing this to try to get our kids to have an outdoor childhood. So if the worst thing happens and it completely fails and we lose all the money, we’ll sell the house and we’ll move to the country so our kids are still outdoors.” ’ 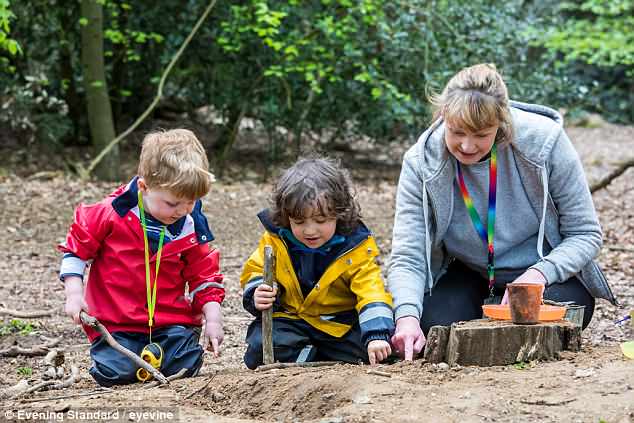 At this point James was still working as a policy adviser in the Department of Energy and Climate Change. ‘He was our accountant, Finance Director and everything else by night,’ recalls Leanna.

With the money and the drive to succeed, the couple were half-way there, but what they needed was a suitable site.

‘Opening in Wimbledon was really hard, as there was nothing like this anywhere. We just had to keep on talking to Merton Council,’ Leanna says.

In January 2015, the first Little Forest Folk opened in Wimbledon with Leanna, three staff and ten children (including Ella).

The children would play outside all day whatever the weather, dressed in their brightly coloured Didriksons waterproof dungarees, jackets and waterproof boots. (Hoods and tarps would be put up if it rained.)

For the first year, James was still working and I was trying to run the business with Jack [then 21 months] with me.

‘A lot of the time I couldn’t do stuff in the day as I’d have to look after him, so I’d have to do things when he was sleeping or at night. We both worked until midnight or 1am every night for at least a year.’ 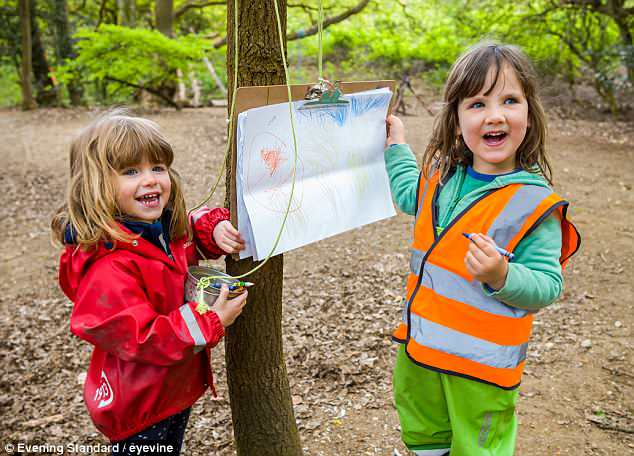 That first year they applied for the Big Venture Challenge, a Lottery-funded initiative that helps social entrepreneurs in education to grow their business quickly.

Through that, they found an investor who has since become a valued friend and adviser.

Then, the applecart was overturned: ‘The day we were due to go to the big launch evening, we found out I was pregnant with Indie!’ laughs Leanna.

In these early days Leanna cooked all the snacks and lunches for the children. Naturally these were (and still are) healthy, seasonal and homemade.

‘One of my long-standing memories of how hard that time was is making fish croquettes with morning sickness. It was horrible!’

Leanna’s far too busy to be cooking for the nurseries these days. That important job has gone to one of the mothers at Ella’s primary school, who now cooks breakfast, snacks, lunches and dinners for their five nurseries in Wimbledon, Barnes, Wandsworth, Chiswick and Fulham. What started as a couple’s dream, and a ragtag crew of ten children has blossomed into 120 children, 63 staff and five sites. 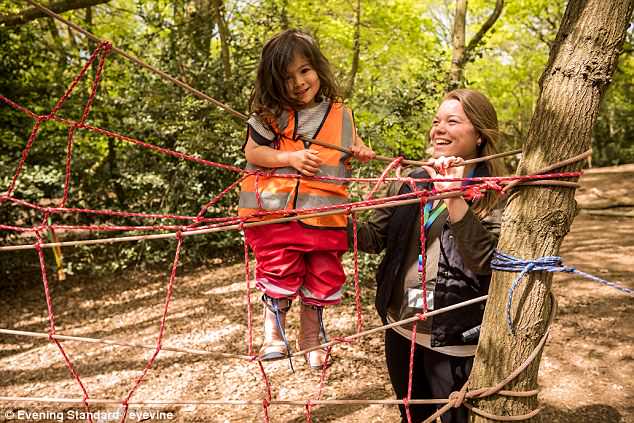 As well as the branch in Wimbledon, they now run nurseries in Barnes, Wandsworth, Chiswick and Fulham

The fees range from £62-£93 per day depending on the site, with 12.5 per cent of places being free of charge to children from deprived backgrounds. Not that it has been plain sailing. ‘When I was in labour with Indie, James got the call that the Wandsworth site we were meant to be opening had just decided to change their mind. Thank goodness he didn’t tell me. He was really weird during the labour and part of me was thinking: “What is wrong with you?” But then you don’t pay attention after a while. He didn’t tell me for a month.’

Leanna worried for the first six weeks after having Indie that she would find it hard to get back her enthusiasm for the project. ‘It only works at this intensity because we love it,’ she says.

What’s more, she spent two weeks in intensive care after giving birth, for HELLP syndrome (a form of pre-eclampsia), on top of a pregnancy involving obstetric cholestasis and gestational diabetes.

Then came the call for their first Ofsted inspection when Indie was just six weeks old. Leanna had to go to the Wimbledon site with her baby strapped to her. But it was worth it — the nursery was certified as outstanding by Ofsted.

What Leanna and James started has now become something of an educational movement, and they are inundated with requests to open more nurseries. Being outside certainly stirs the creative juices. Leanna recounts how a group of little boys at the Wimbledon nursery made a time machine out of a palette, bin lids, ropes and log stumps so they could go back in time and compare the Cretaceous period with the Jurassic period. 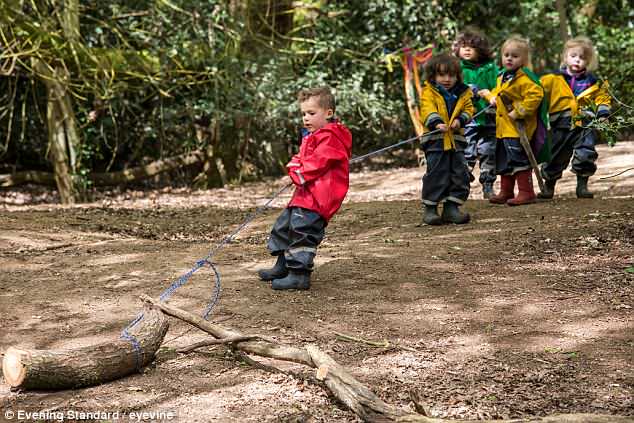 ‘When they said they were going to the Jurassic period, the adults suggested they got their faces painted and they all went and hid in the bushes and played dinosaurs for a while.’

Winning the Queen’s Award for innovation 2018 has been the icing on the cake. ‘We get to go to Buckingham Palace for a reception on June 28,’ she says.

The Palace will also send someone to one of the nurseries (probably Chiswick) to present the award. ‘That is when we can get all the parents along,’ says Leanna, beaming with pride.

Not content with revolutionising nursery education, the couple plan to open a project-based primary school in January 2019.

The school will start with 16 reception age and 16 years one, two and three children, who will learn in mixed age groups. Leanna has spent the past few months penning the curriculum and plans to be headmistress while it gets off the ground.

Jack and Ella, now five and seven, will be among the school’s founding pupils.

‘Essentially everything I am doing is for my own children,’ jokes Leanna, but luckily hundreds of other youngsters benefit along the way.