Is the stars’ favourite sweetener as healthy as it seems? Nutritionist reveals the truth about sugar substitutes loved by the likes of Victoria Beckham

It’s been hailed as the healthiest ever sweetener that is beloved by celebrities such as Victoria Beckham, a natural sugar substitute without the health disadvantages or the calories of the real thing.

But is stevia, a plant extract that is 200 to 300 times sweeter than real sugar, really as virtuous as some claim it to be?

It is available in liquid or powder form, and became the talk of the online fitness community when fashion entrepreneur Victoria recently posted an Instagram story professing her love for SweetLeaf Sweet Drops Liquid Stevia, which is widely available at health shops in the US and UK in flavours such as chocolate.

Now Harley Street nutritionist Rhiannon Lambert has analysed the 10 most widely-used sweeteners for FEMAIL to find out if Stevia is as healthy as it seems.

She also reveals which commonly used artificial sweeteners are a truly healthy alternative to sugar, and which come with their own health detriments. 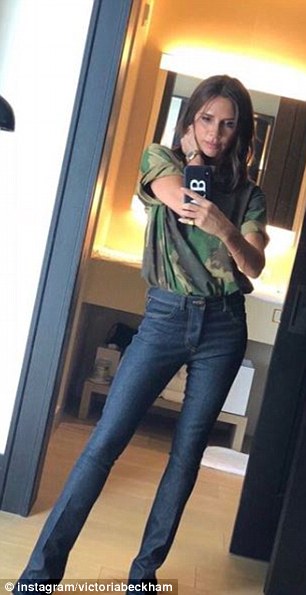 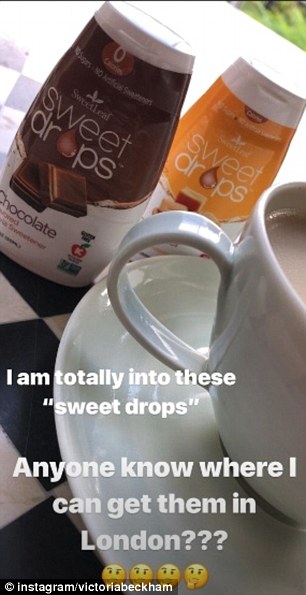 Victoria Beckham has famously cut sugar from her diet and avoids traditional sweet treats such as chocolate. She recently revealed what she uses as a sugar substitute in an Instagram story: liquid stevia. She raved about Sweet Drops, and asked her followers where she could buy them in London 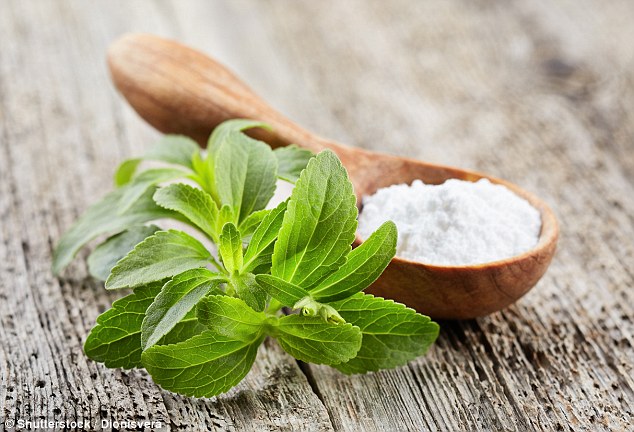 Stevia, which is 200 to 300 times sweeter than sugar, is an extract from the leaves of the plant species Stevia rebaudiana (pictured). It contains no calories because it cannot be metabolised by the body

Stevia-based sweeteners use purified extracts from the leaves of the stevia plant called steviol glycosides.

The plant extract – which is 200 to 300 times sweeter than sugar and is also calorie-free – has been used as a sweetener for many years in Asia and South America.

When used as a table-top sweetener, steviol glycosides are often mixed with other artificial sweeteners for texture and to mask their sometimes bitter aftertaste.

Steviol glycosides were approved by the EU in 2010 after the European Food Safety Authority (EFSA). The EFSA’s reviewing panel concluded that steviol glycosides are not carcinogenic or toxic.

Rhiannon, the author of Re-Nourish: A Simple Way to Eat Well, said that stevia does seem to be a healthy alternative to sugar, even though it may still encourage sugar cravings by sending signals to the brain which trick it into thinking you have eaten sugar.

She said: ‘Stevia is a zero-calorie sweetener that is extracted from the leaves of a plant species called Stevia rebaudiana.

‘Because of this reason, people often assume as Stevia comes from a natural source, they may deem it ‘healthier’ than other artificial sweeteners such as aspartame.

‘Some studies have indicated that taking steviosides (part of stevia) could potentially reduce blood pressure, and there is also evidence surrounding insulin, suggesting it may lower blood glucose levels and be of benefit to those with type 2 diabetes.

‘But some have suggested that stevia may still send sugar signals to the brain, like sucrose.

‘Even if this is the case, studies have failed to show that this increases eating, hunger or satiety.’

Now Rhiannon has analysed the top sweeteners to reveal which are healthiest and which are only best eaten in moderation. 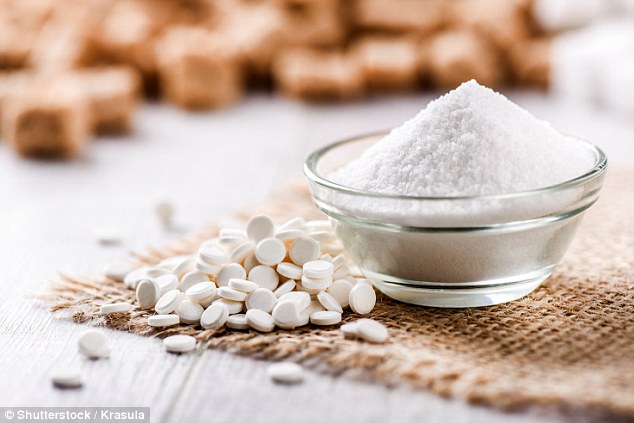 Sweeteners often come in tablet or powder form and are often much sweeter than real sugar. However some artificial sweeteners can come with health disadvantages, including being toxic in large doses, being carcinogenic to animals, and having a laxative effect

Rhiannon says: ‘Low calorie and can be used in an abundance of products. It cannot be used in baked or cooked foods, as it is unstable with prolonged heating.

‘Although it has been the subjects of controversy in regard to safety, the only carcinogenic studies were animal based, and it is therefore still considered a safe sweetener to use in many counties worldwide.’

Rhiannon says: ‘Zero calorie as it cannot be metabolised by humans. It is heat stable, so suitable for baked and cooked foods, but it can have a bitter after taste if not combined with other ingredients, e.g. blended with other sweeteners such as sucralose.’

‘A breakdown of one of the products is acetoacetamide which can be toxic if large quantities are consumed.’

Rhiannon says: ‘This contains zero calories as it cannot be metabolised. It has a very similar profile to sucrose, so it is a good replacement option.

‘It can discolour at high temperatures and little to no evidence of toxic or carcinogenic effects have been found.’

Rhiannon says: ‘This is low calorie and is only sparingly soluble in water, and also has a bitter taste. Previous attempts to ban it were driven by the FDA due to cancer studies in rats.

‘However no causal relationship has been found with normal doses in humans. For this reason, products must state the amount and ingredient saccharine in the ingredients list.’

Rhiannon says: ‘Very low calorie. Excessive consumption has been linked to laxative effect. It contains similar properties to sugar and is fairly new in the UK – approved in 2015.’

Rhiannon says: ‘Zero calorie, and doesn’t break down so is useful for baked and cooked foods.

‘In comparison to other sweeteners, it does seem that stevia is the healthiest option, being naturally derived, very sweet, and not associated with negative health implications.’

Rhiannon says: ‘Low calorie, and mainly used in gum, mints and oral care products. It has been linked with positive dental health due to reduction in cavities and tooth decay.

‘It may also increase collagen production and may increase bone volume mineral content.’

Is Taylor Swift Pregnant? Some Fans Think So

Ellen DeGeneres’ show’s future up in the air depending on investigation findings, experts say
World News