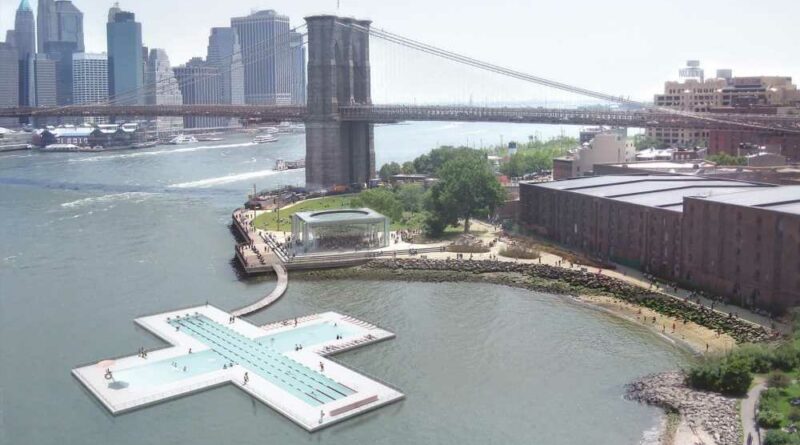 This watery venture just scored a formal street address in the middle of the East River.

Futuristic floating swimming-hole project Plus Pool (+ Pool) has officially been given a city-approved location to drop anchor slightly north of the Manhattan Bridge, in the water adjacent to the Lower East Side, Curbed reported.

The project was first conceived in 2010 when four friends at design firm PlayLab floated it by two members of architecture firm Family.

“It started as a simple idea: Instead of trying to clean the entire river, what if you started by just cleaning a small piece of it?” states a project history on Plus Pool’s official website. “With this thought in mind, four designers proposed + POOL — a floating plus-shaped pool in the inner harbor of the NYC waterfront, designed to filter the very river that it floats in through its walls, cleaning more than 600,000 gallons of water every single day.”

The friends then crowdsourced over $40,000 for their giant East River Brita-filter idea, tested some of its filtration mechanisms at Brooklyn Bridge Park in 2011 and pitched it to city officials.

With approval from the city, a 2013 Kickstarter campaign raked in over $300,000, which funded a prototype that tested in the Hudson River in 2014. After various Economic Development Corporation paperwork was filled out, Plus Pool was moving along smoothly until the pandemic ground progress to a halt.

This month, though, marked a new beginning for the exciting project.

“We have an official confirmation to succeed with the next steps for the project,” Plus Pool managing director Kara Meyer told Curbed on Friday. “We have a home. Mayoral candidates are talking about it . . . We are going to move forward.”

The next big hurdle, Meyer continued, is regulation and funding — to the tune of $20 to $25 million.