In their first gathering after the six-week winter break, MPs sought clarity about the opposition’s stance on border closures and some expressed concern about the impact on border communities and the state’s economy. 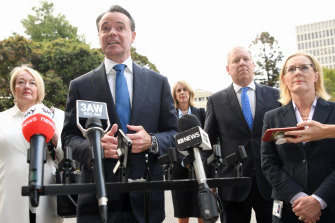 Michael O’Brien with his leadership team earlier this year.Credit:Justin McManus

“It was colourful and energised,” said one MP, who described the Opposition Leader as a “deer in headlights” during the meeting.

Mr O’Brien told The Age last month that the Andrews government could have avoided the state’s fifth lockdown if it had closed the border with NSW sooner.

That attack was a departure from the Liberal Party’s repeated criticism of drastic public health responses that hurt the economy and livelihoods but reflected the growing view among experts in the field that quicker action is needed to combat the Delta variant.

Victoria closed its border to free travel from NSW on June 25 and has twice tightened its cross-border bubble over the past week. On Monday border residents were banned from moving states for anything other than essential reasons.

Mr O’Brien backed that tightening of the border bubble because it prevented people from NSW border areas travelling to Melbourne unnecessarily, but he said common sense needed to be used to ensure essential travel was allowed.

According to eight MPs at Tuesday’s Zoom meeting, who spoke anonymously because they are prohibited from publicly discussing details of party room gatherings, MPs from differing factions put forward their opposition to border closures.

Georgie Crozier, the Coalition’s health spokeswoman and a member of Mr O’Brien’s leadership team, did not directly challenge the party’s policy but said the pandemic would continue for the long term and ongoing border closures were unviable. 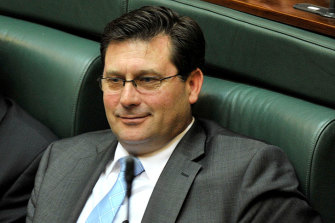 Mr Tilley, whose electorate of Benambra covers a long stretch of the border including Albury-Wodonga, said sudden border closures were “the biggest act of political bastardry” and should be opposed at every step. He told colleagues they had to understand the experiences of those on the border, where it is now illegal to cross for basic activities such as a haircut or going for a meal.

“Bill is under the pump up there and you don’t realise in Melbourne how reliant locals are on the cross-border bubble,” one MP said.

“I was trying to get people to comprehend how intrinsically linked our communities are and how damaging closures can be. We should not be divided by the Murray River.”

Another MP said the meeting was “feisty” but it was healthy for “adults” to air differences of opinion in a political party to reach sound policy decisions.

“It’s better than what happens on the other side. Imagine a Labor MP raising their voice in a caucus meeting. The dictator wouldn’t allow it,” they said.

The Opposition Leader has faced internal pressure over his performance in recent months and there is the prospect of a second leadership challenge against him, with two anti-O’Brien camps in agreement that leadership change is required. Opposition leaders around Australia have struggled to make headwind against incumbents during the pandemic, when voters have rewarded strong interventions to minimise COVID-19 deaths.

The Liberals have spent the best part of the past year basing their political attacks on alleged incompetence by the Andrews government that led to outbreaks and lockdowns. However, Mr O’Brien’s strategy is blunted by the outbreak in NSW, which was arguably caused by the NSW government not locking down quickly enough. The Victorian Liberals long held up Gladys Berejiklian’s government as an exemplar of pandemic management.

Mr O’Brien has said the changed stance on border closures, which he revealed to The Age last month, partly reflects the rapid spread of the Delta variant and the need for quicker action to halt outbreaks.

But what some might have considered a pragmatic shift was viewed with derision by some MPs who believed it was an affront to the small-government values of the party, which has campaigned for proportionate public health rules and against knee-jerk responses.

“I think we need to bear in mind that most communities are 300 to 400 kilometres away from Melbourne, and they’re 700 kilometres away from Sydney. They have not had a COVID case in 12 months. Why should they be made suffer because Daniel Andrews wants to get in competition with Sydney as to who’s the toughest?” he said.