“Menstrual hygiene is a right, not a privilege.”

That’s the message that youth activists hope to take nationwide for the first National Period Day, Oct. 19, as they campaign to end the tax on menstrual hygiene products.

Rallies are taking place on Saturday across all 50 states, where women are gathering in hopes of shifting a culture of silence around periods and demanding policy changes that will help inch toward an economy of gender equity.

What is the tampon tax?

Right now, 35 states still have the “tampon tax,” a catchy nickname for the sales tax imposed on tampons and other menstrual products, since they are considered non-essential goods. Though there is no specific tax for those products, products like pads, liners and cups are all subject to taxes as non-essential items in many states. Viagra, Rogaine, lip balms and candy, meanwhile, are considered basic necessities and are exempt from sales tax in some of these same states.

Critics of the tax have said this is an injustice that needs to be corrected.

Take 21-year-old activist Nadya Okamoto, who has been vocal in the movement to push legislators to eliminate the tampon tax.

“Menstrual hygiene is a right, not a luxury, and the tampon tax tells us that it’s essentially a luxury,” Okamoto told “GMA.” “That assumption is one of our biggest barriers in front of us, so we need to take that down so we can continue to fight for menstrual equity.” 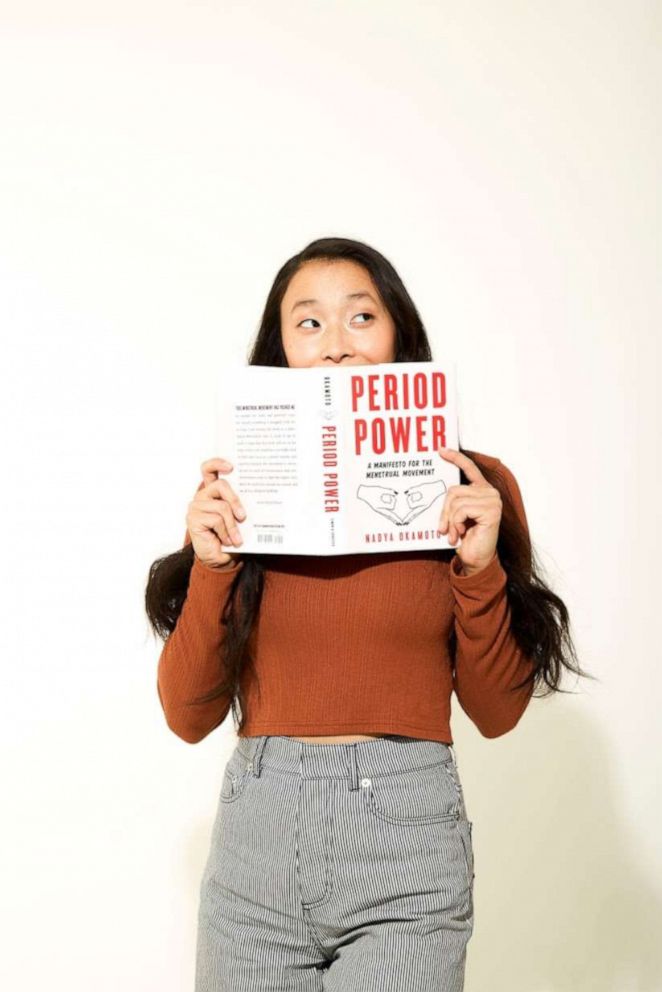 In 2014, Okamoto’s family experienced legal homelessness after her mother left her job. Okamoto’s commute to school went from 20 minutes to more than two hours. On her journey through downtown Portland, she said she would often pass by homeless shelters where she made conversation with some of the women she met. It was there where she learned about period poverty, the lack of access to menstrual hygiene resources.

Ever since then, she “became obsessed with periods,” she said.

As she researched the topic more and learned about issues people face regarding menstruation, the tampon tax stuck out to her.

“Advocating against the tampon tax and once and for all getting our government to actually recognize menstrual products as a necessity is really important,” Okamoto told “Good Morning America.”

From there, she added, they can work on solving other problems, from providing “freely accessible period products in schools, shelters and prison,” to getting benefit programs to cover feminine hygiene products that many don’t currently cover.

For example, federal assistant programs like the Special Supplemental Nutrition Program for Women, Infants and Children, aka WIC, don’t include access to menstrual hygiene products. 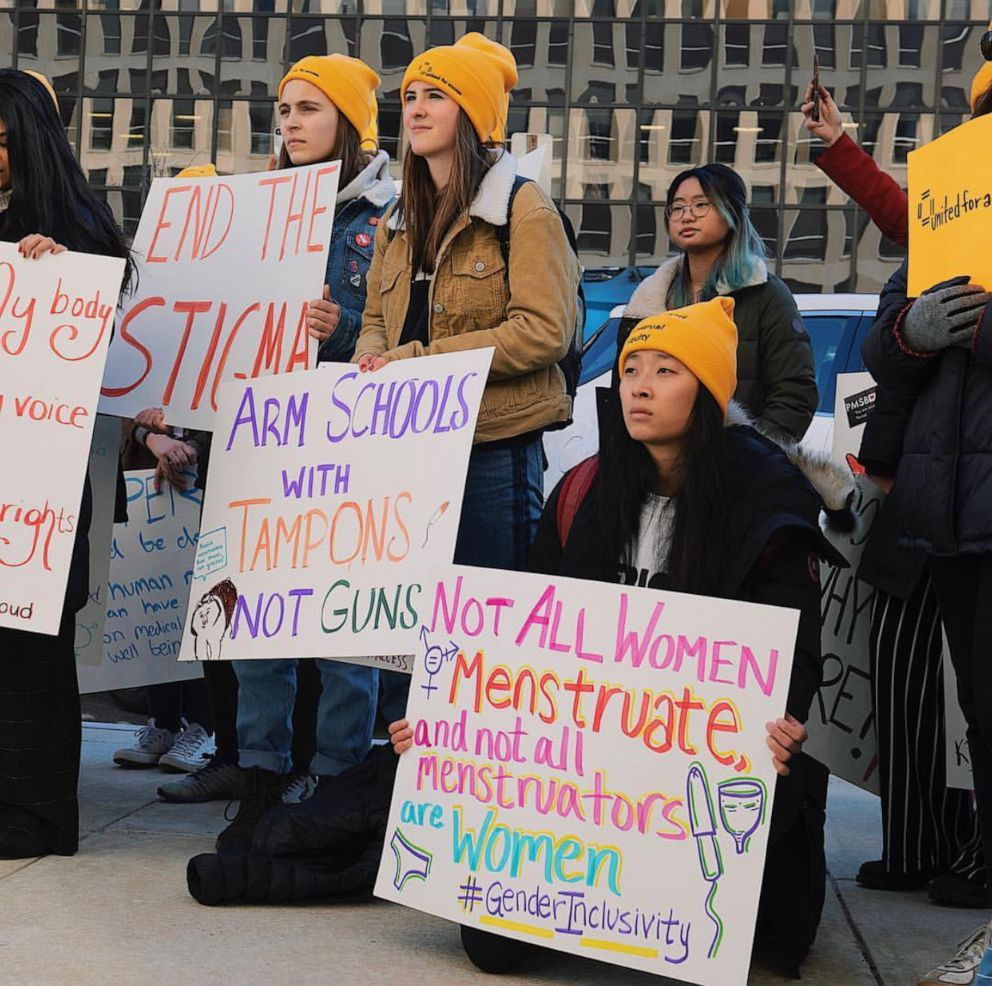 A common hurdle in this legal fight, Okamoto said, is that “often cisgender male legislators” either don’t understand the issue or are hesitant to talk about periods in a public setting.

“So a big part of this fight is just getting the culture ready to talk about periods,” she explained. “So legislators can come out and speak freely about it without having to think they’re the ones who have to do all the heavy lifting on destigmatizing menstruation.”

Momentum to repeal the tampon tax

In recent years there has been momentum to repeal the tax. States like Connecticut, Maryland, Massachusetts and New Jersey passed laws to eliminate the tax. In this past year, progress has been made in Rhode Island where the tax was eliminated in their budget effective in June of this year, and in California where a budget bill is passed in which period products were exempt from a tax for two years.

When she first came up with the proposal she said people dismissed it and made fun of her. “People would say, ‘Oh, it’s going to be a bloody fight,’ and they started calling me the tampon lady,” Garcia told “GMA.” 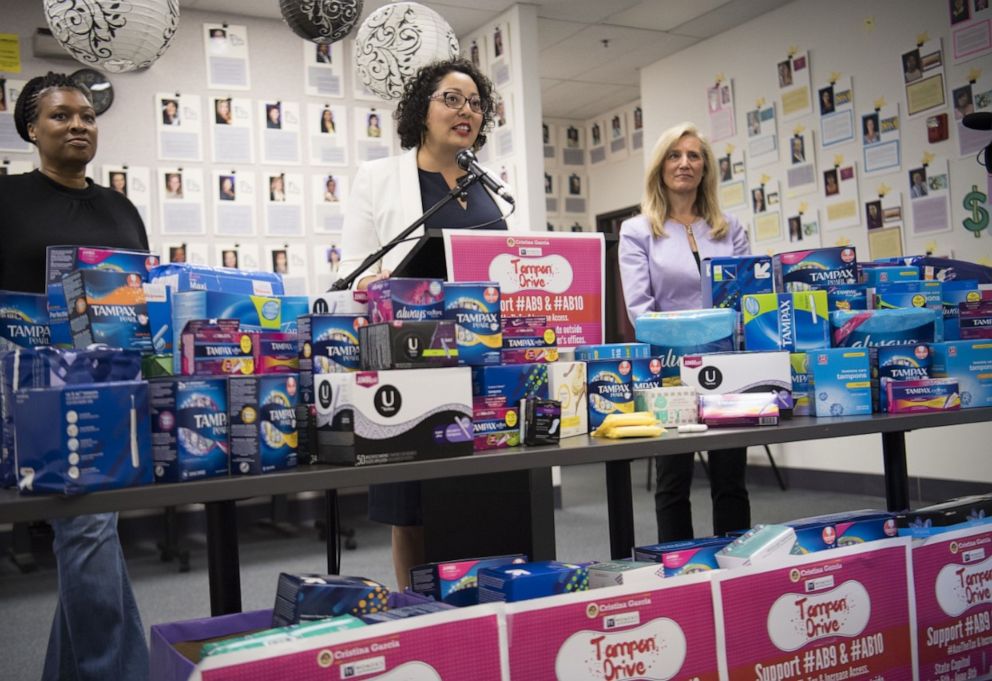 Opponents have said the main problem is the loss in revenue.

Katherine Loughead, a policy analyst at the Tax Foundation, a think tank based in Washington, told “GMA” that abolishing the tampon tax may force governments to apply higher sales tax rates to other items.

In large states like California and Texas, taxes on menstrual products alone can generate more than $20 million annually. To make up the difference, lawmakers have suggested raising taxes on alcohol and tobacco. But no change has been made.

The danger of creating so many exemptions is that “ultimately it leads to a slippery slope, where do we draw the line? There’s a lot of things that are a necessity to other people,” Loughead said.

However, Garcia argues if people were able to keep the taxed money, they could spend it on other taxed products, thus adding to the state’s tax revenue.

“But more importantly, my uterus should not be used in balancing the budget,” she said.

As it turns out, this issue is not unique to the U.S.

Half of the European Union countries still impose a value-added tax, or VAT, rate on menstrual hygiene products although some have reduced that rate. Other countries, including Australia, India and Canada, have abolished the policy.

At the end of the day, Garcia said, this fight is about much more than tax revenue or the affordability of period products — it’s about the larger conversation of equality under our system and how we as a society value a woman’s body.