Glasgow: The way Boris Johnson told it, Scott Morrison’s decision to formally adopt a target to reach net zero emissions by 2050 was nothing short of heroic.

The British Prime Minister, a man known for a turn of phrase that veers Churchillian, was addressing an audience of school children at Downing Street in the hours after news came through that whatever the Nationals made of it, the Australian PM would travel to Glasgow for the United Nations climate talks with a commitment to reach net zero emissions by 2050. 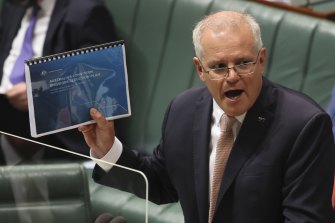 Scott Morrison will tell other countries at Glasgow that Australia will do its bit on climate but on its own terms.Credit:Alex Ellinghausen

Johnson was thrilled, even if the broad international ecosystem of climate scientists and activists was less impressed.

“I do think that world leaders are really starting to listen and see how urgent this is and what an emergency this is,” Johnson told the children.

“[The Coalition’s new net zero by 2050 policy] was actually very difficult for Australia to do … because Australia is very heavily dependent on coal and on lots of carbon-producing industries.

“They’ve done a heroic thing, the Australians, in getting to that commitment.

“I hope they will be joined by lots more countries in that region for the COP summit.”

In climate circles though, Morrison’s commitment was widely viewed as the very least he could do, done at the last possible minute.

“Seen from the UK, Australia is claiming a leadership position on climate change – unfortunately the league table it’s leading is that of climate bullshitters,” said one well-positioned observer, honorary research fellow at the Grantham Institute at the Imperial College London, Richard Black.

So why was Johnson so effusive?

Johnson has a lot invested in the success of COP26. Should it succeed Johnson and his government will bask in the reflected glory.

It will be evidence that despite Brexit, the United Kingdom remains a key global player rather than a diminished one.

Should the talks fail, Johnson as host will bear a large portion of the blame. With that in mind it made perfect sense that Johnson was so effusive in praise of Morrison, whatever the merits of Australia’s climate contribution.

At their best, international talks like this are settled well before negotiators and heads of state lob in to grip-and-grin for cameras.

The Paris Agreement might have been drafted at a COP conference in December 2015, but its success was all but guaranteed a year earlier in secret talks between the United States and China.

Then-US president Barack Obama, shaken by the failure of the Copenhagen talks at the start of his term, was determined that Paris would be a success and directed his climate envoy, Todd Stern, to begin discreet talks with China. 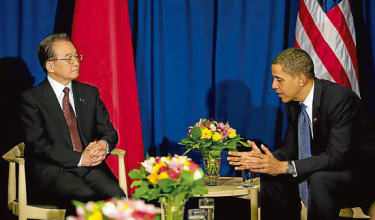 For nine months, negotiations dragged on before Obama and Xi shocked the world with a joint announcement. The US would set new emissions-reduction targets and China would agree to cap their emissions by 2030.

The announcement broke a diplomatic logjam that had cruelled climate talks for years – the tension between developed nations that had already benefited from carbon economies and developing ones that had not. It also stripped away the excuse of critics of climate action in many nations — including Australia — that there was no point in acting until China did.

With the world’s two superpowers, and two greatest greenhouse gas polluters, determined to act, Paris was locked in.

But the world has changed and the object of Glasgow is different.

At Paris, the world promised it would begin reducing emissions in an effort to keep warming well below 2 degrees and as close to 1.5 degrees as possible. At Glasgow, nations must demonstrate that they are on track to doing so, and that they can keep to the voluntary reductions targets they have already set and increase them as needed.

Today, the cautious trust that Xi and Obama once shared has evaporated in the geopolitical rivalry between the two nations.

Xi will not attend the talks and nor will his Russian counterpart Vladimir Putin. COVID-19 has not only distracted leaders from climate but contributed to an energy crisis that has led to a surge in coal and gas production.

Though under President Joe Biden, the US has not only rejoined the Paris Agreement, but become a global leader on the climate effort, Biden is being undermined in his efforts to reduce domestic emissions by the stubborn resistance of two Democrats whose votes are necessary to pass massive spending bills.

On Friday morning Australian time, China announced its updated climate targets under the Paris Agreement, to the general disappointment of observers.

It contained little more than a previously declared effort to see emissions peak by 2030 and hit net zero by 2060.

Thom Woodroofe, a former climate diplomat and a fellow at the Asia Society Policy Institute, described China’s announcement as a “missed opportunity” to seize global climate leadership as the COP talks began. He added that if China was serious about hitting its 2060 net zero goal, it could not wait until the second half of this decade to start phasing out domestic coal use. 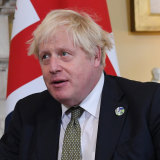 Helen Mountford, vice president of climate and economics with the World Resources Institute, a US think tank, was also faint in her praise, describing China’s plan as a “modest improvement” over previously announced targets.

Before these talks begin, there has been no grand bargain.

In this environment as Johnson heads to Rome for G20 talks convened by Italy — the co-host nation of COP26 — what he needed most was momentum, or something that looks like it.

And this is where the soaring praise for Australia’s 2050 net zero commitment comes in.

But as the Grantham Institute’s Richard Black put it so bluntly, not everyone sees Australia’s goals in such a positive light.

Morrison’s decision to bring to COP a projection that Australia will beat its previous commitment of reducing emissions by 26-28 per cent by 2030 wins little praise in a world where organisers are calling for 50 per cent cuts by that date. And besides, if Australia is so sure of beating its target why not make a formal commitment?

But scepticism towards the Australian commitment on climate exists well beyond headline figures.

Australia has rejected joining a global compact to reduce methane emissions that is being championed at COP26 by the European Union and the US. Indeed, it is championing a gas-led recovery. And it backs the coal industry in the face of the growing global alliance to see coal rapidly phased-out.

Similarly the road map outlined by Australia this week emphasises the role of as-yet unproven technology to reduce emissions in future instead of policies that would drive them down at once.

This suggests to observers like Black that Australia’s heart is simply not in it.

“It’s very obvious that the Australian government doesn’t really want to be announcing a net zero target but that it’s been forced into doing so by a combination of US pressure, the threat of an EU carbon border tax and the utter horror with which it’s being regarded by its Pacific neighbours,” Black says.

“The plan just put forward isn’t realistic from either a climate change or economic point of view. It doesn’t even try to halve emissions this decade, which the science indicates is necessary.”

Closer to home, Australia’s small island neighbours have been polite but clear in their lobbying.

“I welcome Australia’s net-zero pledge by 2050 and look forward to seeing my friend @ScottMorrisonMP at @COP26,” tweeted Fijian Prime Minister Frank Bainimarama. “There, Fiji will seek plans from high-emitting nations to halve emissions by 2030 – the only goal that can keep 1.5 alive and keep low-lying island nations above water.”

Australia is far from the only country whose rhetoric is not always congruent with policy.

A little over a week ago, Saudi Arabia announced a net zero target despite the fact that not long before its energy minister, Prince Abdulaziz bin Salman Al Saud, had reportedly said at a private event hosted by the Bank of America that his nation would not stop selling oil until none was left to sell. “We are still going to be the last man standing, and every molecule of hydrocarbon will come out,” he said.

Despite the rapidly heating climate and the threat of catastrophic climate change within most of our lifetimes, it is not yet clear that the Paris Agreement can survive the mounting pressures confronting it, or that COP26 can succeed in harnessing its promise.

One person who fears the worst is UN secretary-general Antonio Guterres, who tweeted this week: “The time has passed for diplomatic niceties. If all governments — especially G20 governments — do not stand up and lead efforts against the climate crisis, we are headed for terrible human suffering.”

As an agreement rather than a treaty, there is no penalty for those nations that do not set and reset increasingly ambitious emission-reduction targets.

It is becoming clear that should COP26 succeed and the Paris accord prove resilient, it will need nations like Australia to embrace in spirit as well as in word.