Home » Lifestyle » The One Super Gross Thing Your Bed Is Probably Dirtier Than, According To Science

I’m sorry my friends, but this latest discovery about your bed might have you losing sleep. Turns out, your bed is probably dirtier than you think — and the thing it’s probably dirtier than is super gross. This is where a healthy dose of denial is totally acceptable; in fact, I totally support you erasing this information from your memory as soon as you read it. Wait for it — according to a new study from North Carolina State University published in the journal Royal Society Open Science, your beloved bed may be dirtier than a chimpanzee’s bed. While this in itself is not disturbing, the reason why is going to give you a serious case of the ickies.

"We know that human homes are effectively their own ecosystems, and human beds often contain a subset of the taxa — or types — of organisms found in the home," Megan Thoemmes, lead author of a paper on the work and a Ph.D. student at North Carolina State University, said in a statement. "For example, about 35 percent of bacteria in human beds stem from our own bodies, including fecal, oral and skin bacteria."

Gross, right? The study also revealed that chimps don’t have fecal matter or skin bacteria in their beds, which means their beds in the forest are way cleaner than your luxury bed in your home. And, the worst part is that our beds are a gross bacteria fest that we’re 100 percent responsible for creating. So, if you need permission to stop washing your sheets every week, the news that it really doesn’t help much unless you wash them every day is the reason you’ve been looking for.

"This work really highlights the role that manmade structures play in shaping the ecosystems of our immediate environment," Thoemmes said. "In some ways, our attempts to create a clean environment for ourselves may actually make our surroundings less ideal." This news certainly makes a case for sleeping in a treehouse if that’s your jam. As it turns out, all of the creature comforts invented by humans are actually making us more susceptible to illness.

"It has been suggested that changes in the types and diversity of species with which we interact have been to our detriment, whether because we are no longer exposed to the diversity of environmental bacteria necessary for our immune systems to fully develop (e.g. the hygiene hypothesis), or because we fail to acquire commensal species on which our physical health and mental well-being depend," the study explained. This one of the reasons doctors often advise against overuse of antibacterial products.

According to the study, the fact that chimps sleep in their natural environment actually reduces the amount of bacteria they’re exposed to. "It has been suggested that what is missing from many homes are the bacteria and other organisms associated with soils, leaves and outdoor habitats," the study reported. "Implicitly, this body of research presumes that our ancestors were exposed to microbes and insects from diverse environmental sources, including during the hours in which they slept." 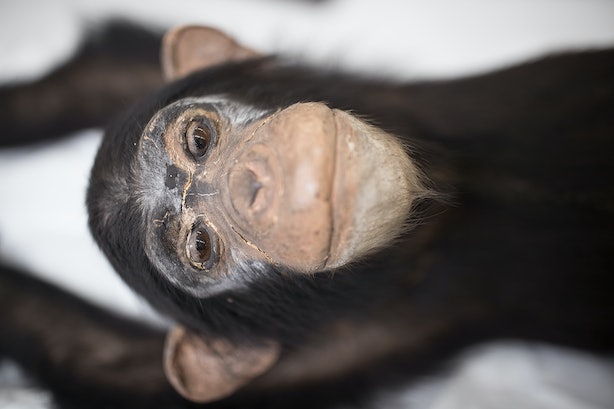 Basically, chimps’ beds were found to contain bacteria from their surrounding environment — and, it’s the same for humans. However, because humans spend the majority of time indoors, the bacteria we are surrounded by, like skin flakes and feces, is from our own bodies. it collects in our homes and in our beds because it has nowhere else to go. What’s more, chimps’ tendency to change beds often might be the reason why no fecal matter was found in their beds.

Obviously there are things you can do to lower the amount of contaminants in your home, but it takes a Monica Gellar from Friends-level commitment to reduce the amount of gross you’re surrounded by. This is where that denial comes in handy because, who has that kind of time to devote to cleaning? The good news is that you’ve been sleeping with this gross stuff your entire life and you’re totally fine. This is definitely a case of the less you know the better because, let’s face it, getting a good night’s sleep is hard enough without tossing and turning all night thinking about lying in fecal matter.